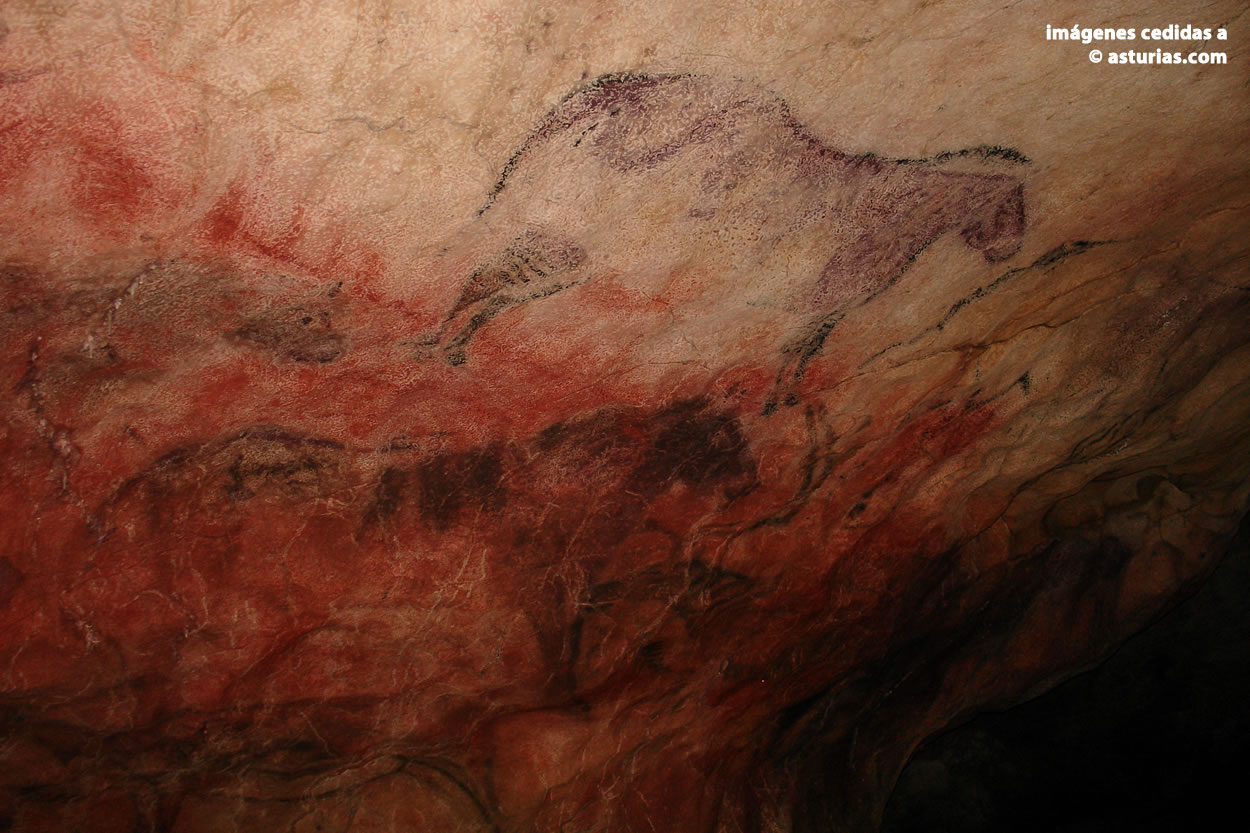 The cave of Tito Bustillo is one of the great sanctuaries of the Palaeolithic art of Europe. It is part of a network of caverns connected to each other and belonging to the same limestone formation in which other caves opened temporarily inhabited by prehistoric man. In 2018, 50 celebrated its discovery. Open from March 2 to October 30, 2022.

Ribadesella was one of the world cradles of Paleolithic civilization, with generations and generations of men who grew and multiplied around the estuary of Sella. A perennial continuity of life that extended during 25.000 long years.
The Paleolithic potential in Ribadesella equals, at least, the three most important foci in the world. The complexes of La Garma and El Castillo in Cantabria, and Les Eyzies in France.
From 2008 the cave is HERITAGE OF HUMANITY.

What does the Tito Bustillo Cave contain?

The call Gallery of the Horses, in which the compositions engraved on the rock abound, gathers different figures of this animal along with those of some great bovid of the glacial times (uros or bison) and that of a reindeer. Because of the technical and stylistic similarity offered by these representations, they can be considered as contemporary.

On the other hand, it turns out that in the world scenario there is no known density of sexual motives like the ones that take shape in Tito Bustillo and the Macizo de Ardines.
The phallic representations found are the first sample of male sex within the known rock art. So he keeps it the prehistorian Rodrigo de Balbín, the man in charge of directing the archaeological prospections in the environment of Tito Bustillo. When the research team found the penile sketches designed by the Palaeolithic man in the stalagmites of the cave of the Lloseta, the professor of his extreme singularity already warned. Moreover, the male subject never sought his direct replica in the art of the time; if it did, it was transfigured and animalized. Finding sexual material concerning the male, and so explicitly, gives Ardines' latest findings a new dimension worldwide. Actually to date there is no record or documentation of a similar symbology, it may exist, but no one has found it, holds the professor of prehistory.

A central stalagmite rises one and a half meters high and is painted in its entirety with ferric oxide, which gives it a red color. The paint also contains several layers of pigment, creating a thickness that is not usual in Paleolithic pictorial samples. It is, clearly, an act of reinforcement of the sexual motive, red in itself adds to the rock painting a vitalizing value.

The cavern of the Lloseta It is located at the top of Tito Bustillo, at the height of the central gallery of horses. Both caves are communicated through an open hole in the karst framework. La Lloseta, on the other hand, is just a few 300 meters from the also singular Vulvas Dressing Room, a space where the prehistoric ones meant the fertility of women, and one of the few female sexual samples of rock art known to academics.

The latest findings allow researchers to connect the dots in a way that greatly multiplies theories about the cultural longevity of the Paleolithic Riosellano. And the fact is that the age of the new paintings, about 25.000 years, passing through the verification of the widely recognized intermediate path, 10.000 from the Magdalenian, up to 7.000 from the Azilian, show that, at least, Cro-Magnon man inhabited Ribadesella for a very long period of 18.000 years, without counting those that followed and that would confirm the entire 25.000 years that preceded the birth of Christ.

The processing of reservations for groups can be done through phones 902 306 600 or 985 185 860
Tickets can be purchased at the counter of the Art Center or Traves de la web www.centrotitobustillo.com

In both places you can also buy tickets to the Center and the Cuevona de Ardines as well as all the activities that take place in summer.
Open from March 1 to October 29, 2023.

How much does the entrance to the Tito Bustillo caves cost?

It has all the information about the purchase of tickets, schedules, rates and conditions in the link that we provide. To make an online reservation in Tito Bustillo

to 0,22 km Located in the quiet town of Ardines, just 1 kilometer from the town of Ribadesella and its beautiful Santa Marina beach, with fine and golden sand ...

to 0,43 km The fact that anyone interested can discover this rock treasure any day of the year, turns the center into virtual access to a ...

to 0,49 km Indian architecture house with two floors, surrounded by a large garden with native trees and palm trees, located in the urban area of ​​Ribadesel...

to 0,52 km La Parrilla restaurant, located at the entrance to Ribadesella, offers us the opportunity to enjoy the best fresh fish and seafood ...

to 0,63 km Our six apartments are newly remodeled in 2014, equipped with all the comforts, to make you feel at home. There are 6 apartments of ...

to 0,64 km Cider house restaurant in the urban area of ​​Ribadesella, with a large interior terrace and a cozy exterior terrace to drink some ciders in the shade of ...