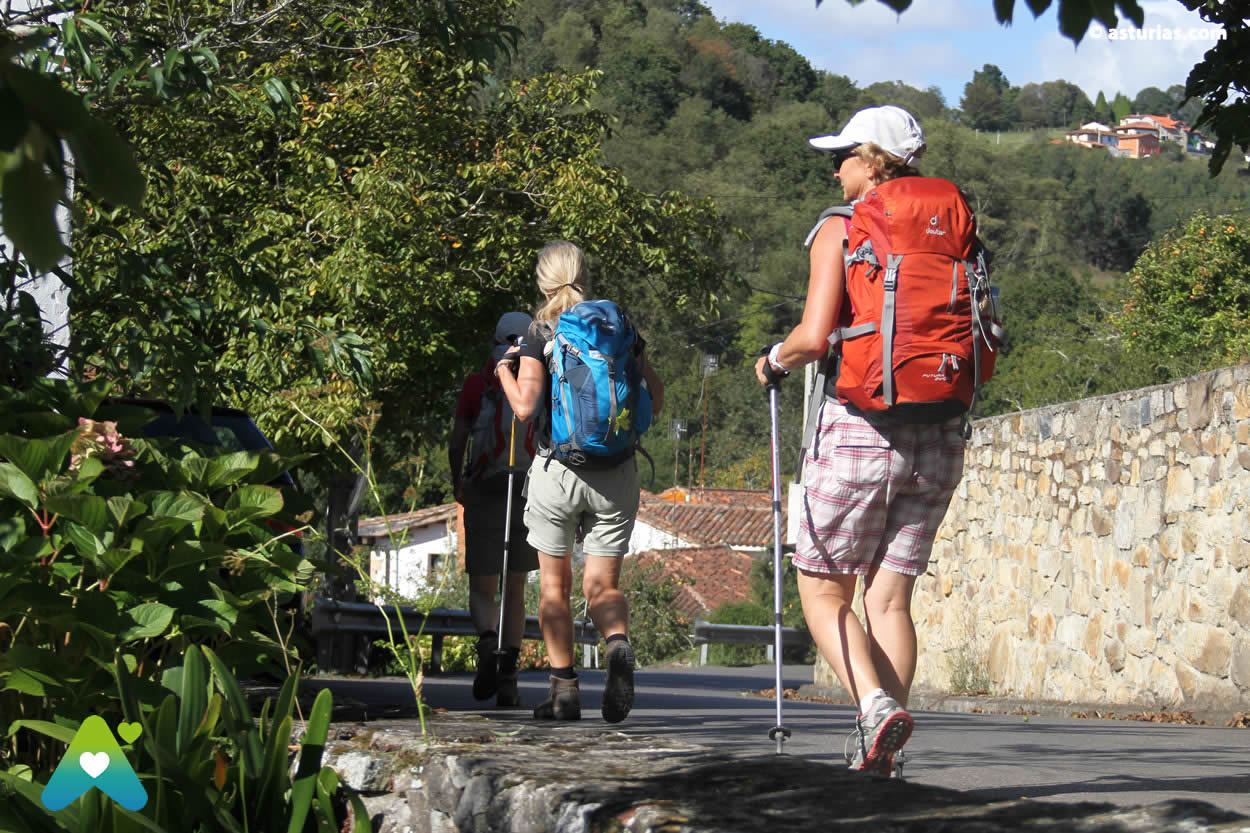 Although the road to Santiago in its Asturian side is less traveled with respect to other routes of pilgrimage to Compostela, it is no less true that the Jacobean road on its way through Asturias depara a great beauty and a number of cultural attractions that little or nothing They have to envy other routes. The problems of signaling and poor traffic at some points, which pilgrims have confirmed, are being corrected year after year and Asturias again sounds like a land of passage. Not in vain, the Principality was a pioneer in the pilgrimage to Santiago.

Three centuries before the apogee of this universal route began in the 12th century, the Asturian monarch Alfonso II he had already set out for the tomb of the apostle. He was in the year 829, inaugurating the oldest Jacobean route known. The king in question connected the city of Oviedo with Compostela through the interior lands of western Asturias. He reached Iria Flavia, where previously the hermit Paio had had visions of angels pointing to a burial mound on Mount Libradon. This announcement reached the ears of Bishop Teodomiro, who discovered the sepulcher and informed Alfonso II el Chaste, who immediately left for Galicia and ordered a simple masonry and mud church to be built on top of the tomb. The king himself gave complete information to Charlemagne, and the news spread rapidly throughout Europe.

This primitive route will lose its pre-eminence in favor of the one that runs along the Meseta, although it will be regularly visited between the 11th and 13th centuries, when the cult of San Salvador de Oviedo acts as a powerful magnet for many pilgrims, who deviated from the Camino French in Leon and went to venerate the reliquary of the Holy Chamber. From Oviedo they followed the footsteps of Alfonso II.

But in addition to the itinerary followed by the king, history has decided that Asturias has two main routes of the Camino de Santiago: the Route of the Interior y the Coast Route. Both come together to show the best of our region: sea and mountains, art, tradition, architectural gems, gastronomy, populous villas and hidden places.

We detail below the most important sections of the pilgrim roads in our community:

Port of Pajares-Oviedo. This is the well-known Interior Route and basically consists of two stages that add up 58 kilometers and a half. The Camino passes close to high peaks, beech forests, extensive meadows and vertiginous Leon valleys. Already in Asturian lands is the first of the pre-Romanesque jewels that the pilgrim will find: Santa Cristina de Lena in the council of Pola de Lena. In this council we can rest in a shelter. Then, heading to the nearby village of Mieres del Camino, the jacobea road crosses the place of Villallana and the Mieres locality of Ujo, obligatory point of reference that conserves the best Romanesque church of the zone. From here the Camino enters the industrial passage of the central Asturias, continuing its advance through the valley of the Caudal river. In the town of Olloniego there is an interesting historical complex made up of an old medieval bridge and the Casitorre de los Quirós. In the direction of the Asturian capital, we cross La Manjoya and San Lázaro del Camino. Once in the city center, the itinerary crosses the street of La Magdalena, arrives at the Plaza del Ayuntamiento and continues to the Plaza de la Catedral.

Bustio-Oviedo. It consists of 6 stages that add up to 128 kilometers. The northern road enters Asturias through Bustio, and the road from here offers a landscape of rivers, beaches, cliffs, green meadows and white limestone until you reach the Jurassic coast and the Sierra del Sueve. The first thing that crosses is the fluvial course of the Deva by the bridge of Bustio, stretched between Cantabria and Asturias. The Camino then crosses Colombres, capital of the Ribadedeva district, a quiet village where sumptuous mansions of Indians stand, such as La Quinta de Guadalupe, now the headquarters of the Archivo de Indianos. On the way to the village of Llanes, the road advances in the shadow of the Sierra de Cuera, crossing the places of Buelna, Pendueles, Vidiago, and Puertas de Vidiago. Llanes capital has a rich historical heritage, with part of its walls and buildings from medieval times and beautiful urban palaces of the XV-XVIII centuries. Then the road runs near the monastery of San Salvador de Celorio and the Romanesque church of San Antolín de Bedón. After the beautiful town of Nueva and the Aguamía bridge, the village of Ribadesella. The Jacobean route follows the layout of what used to be the Main Street - with arcades and emblazoned houses from the 16th-19th century and the plateresque façade of the Renaissance palace of Cutre, today the Town Hall. By the bridge over the river Sella you reach the sandy area of ​​Santa Marina, from there the Jacobean route goes to San Pedro, Abeu and Leces, where there is a hostel for pilgrims. The Way leaves the council of Ribadesella for the beautiful and extensive beach of Vega and the village of Berbes. Then, very close to the sea, the coast of the municipality of Caravia and ends at the beach and sale of La Espasa, already in terms of the Colungués council. By Bueño and Covián he approaches the village of Colunga that preserves the chapel of its hospital of pilgrims and its old Romanesque parish. In Villaviciosa is Our Lady of Oliva, protogótica church. Further on, the Camino runs next to the Romanesque church of San Juan de Amandi and overcomes the Valdediós River by the Amandi bridge. The Route of the Coast continues its journey through Grases and Niévares, it goes in search of the city of Gijón, which is approached by the parishes of Deva and Cabueñes, where the Labor University rises.

Oviedo-Santiago de Abres. 7 stages, a total of 155 kilometers. Avilés, founded in the year 1100, is the oldest coastal village on the route. In the direction of it, the road goes through the parishes of Santa Eulalia del Valle and San Juan de Tamón, in Carreño, and that of San Vicente de Trasona, in the neighboring council of Corvera. Then it is introduced in the old town of Avilés by Carrer del Rivero, where there was a hospital for pilgrims, next to the current hostel, and it is discovering remarkable medieval monuments. From Avilés goes to the council of Castrillón, where it crosses Quiloño, Piedras Blancas, the municipal capital, and Santiago del Monte. It then goes to the river Nalón, whose course exceeds, in terms of the council of Soto del Barco, by the bridge of the N-632 road, located at the foot of the medieval castle of San Martín. Continues, already in lands of the council of Cudillero, for the places of El Pito, where the magnificent architectural ensemble of the Selgas is located, and Soto de Luiña, where it passes between the Baroque church of Santa María and the house of the hospital of Nuestra Señora del Rosario. Luarca it preserves old coats of arms and pretty Indian buildings. In Almuña, in the vicinity of the village, a hostel for pilgrims is installed. The route continues towards Navia fording the Frejulfe river. In the upper part of Navia, which was walled, some buildings of modern times are conserved; in the widening, beautiful Indian palaces are located. Once over the estuary, the Camino travels, in rapid transit, the council of Coaña, calling at the hospital and chapel of Santa Ana in Jarrio and in the place of Cartavio, before venturing into the council of El Franco, whose capital, Charity, go through. The route crosses the Porcía river, border between the councils of El Franco and Tapia de Casariego. A branch of the Camino leads to Tapia de Casariego, capital of the homonymous council, which has a shelter. Already in lands of the council of Vegadeo, and after crossing its capital, we take the Camino Real de Bustelo that leads to the Eo River and to the villas of Figueras and Castropol. Both locations historically had a pilgrim hospital. From them you can cross the estuary, as before, thanks to a service that regularly makes the passage to Ribadeo, the first Galician town that receives the Camino de la Costa.

Oviedo-Fonsagrada. 9 stages, a total of 154 kilometers. According to the route followed by the monarch, the road initially runs through the municipalities of Oviedo and the Regueras to enter Grade after crossing the Nalón River by the Peñaflor Bridge. Through the territory of Grado also crossed a Roman road that penetrated Asturias through the Puerto de la Mesa. There are references to the existence of three hospitals in the council. After the Sanctuary of Fresno we go into Salas. We are probably faced one of the stages with the greatest monumental density of the Asturian primitive Way. There were several pilgrim hospitals in the province. There is evidence of the existence of hospitals in: Cornellana, Salas, La Espina, Labio and Faedo. The Camino continues towards Tineo on the right bank of the Nonaya River. There by 1222 the king Alfonso IX will order that all the pilgrims transit through Tineo and through the Monastery of Obona. We left the municipality in La Lavadoira to get into the council of Allande and get closer to its municipal capital, Pola de Allande, which has a shelter. It is one of the most unpopulated sections of the Asturian Jacobean itinerary, but it has the particular charm of enjoying one of the most beautiful landscapes of the Asturian mountain that leads us to Grandas de Salime, the last council of this route in lands of the Principality and that delights us with two obligatory visits: the Parish Church of San Salvador of excellent Romanesque portal, and the Ethnographic Museum of Grandas de Salime, a reference point of traditional Asturian culture.

To approach the primitive Path from the coastal path, we must take the variant by Oviedo.

Who takes you to the primitive Way?

The Primitive Way is the first pilgrimage route to Santiago de Compostela that, starting from Oviedo, crosses the Asturian West and after reaching the city of Lugo, it reaches the Galician capital. Both in spring and autumn Geoface proposes you three options to complete the route: on foot, on horseback or by bicycle in hotels and rural accommodation, with full board, support vehicle and guide interpreter of the natural environment and artistic heritage.
More info on Geoface: takes you to the Primitive Way.