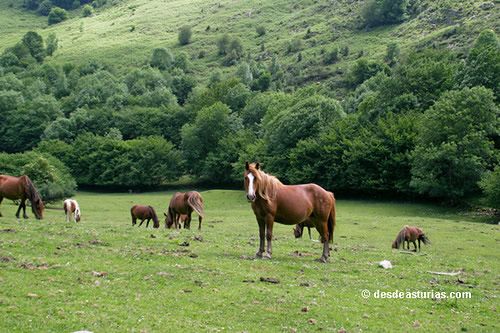 A nearby mountain range

A nearby mountain range

The Sierra de Cuera is a first stage to plan routes and excursions At any time of year and for all types of public. Its slopes are bearable in almost all its orography. From numerous points we reach excellent panoramic views of the Cantabrian Sea and the Picos de Europa. In fact El Cuera is a small mountain range, a limestone cordal that has had the privilege of being located halfway to the ocean and the highest mountains. It runs parallel to both landscapes and has been equally infected by both.

When speaking of the Sierra de Cuera, we speak of a high plateau, upholstered with meadows and crowned by peaks of easy ascent. Brañas abound, some inhabited. The flocks or vegas they preside over the ports of Cuera, which have always been destined for cattle grazing. Also visible are the traces of mining exploitations that worked until the 70 years of the last century. In addition it contains in its limits a great prehistoric wealth, dated in numerous caves and chasms. The metallurgical activity around the 2000 BC stood out. Rests of various phases of the copper transformation process have been located. El Cuera served the economy and society of the Bronze Age. Nowadays many of its hollows of its southern slope serve for the healing of the popular Cabrales cheese.

The landscape and ecosystem of Cuera

Its landscape It is integrated into the network of protected areas of the Principality of Asturias and covers an extensive territory of the East of Asturias. Hillsides, forests, valleys and peaks are deployed throughout five municipalities of this region: Cabrales, Llanes, Peñamellera Alta, Peñamellera Baja and Ribadedeva. A total of 40 kilometers in length that begin in the environs of the river Sella by the West and continue to scarce distance of the sea, finalizing in the Eastern end of the Principality, next to the Deva river.

El Cuera is also a well-nourished ecosystem. Of its fauna, the presence of the fox, the marten or the wild cat stands out, as well as the abundance of roe deer and wild boar. With luck we can see the flight of the golden eagle, vultures, Egyptian vultures and other great raptors. The forest consists basically of beech, oak and holm oak woods. If we look at the mountains from the coast we see that there is hardly any appreciable vegetation, however, beyond the first line of summits, the Cuera opens into narrow valleys, blind on many occasions, that host a myriad of meadows and brañas fringed with ash trees, maples and espineras. The widest and most productive valley from the livestock point of view is undoubtedly the Llosa de Viango. On the slopes that surround this plain and almost to the highest peak of the Sierra, the Turbine Peak, the most extensive forest mass of the mountain range is located: a eútrofo beechwood oriented to the north, that collects the frequent mists that come from the sea and that in this point they do not manage to exceed the chordal.

For the human being, the mountain range rises in insurmountable appearance and delimits two geographical spaces that have had different historical and social evolution: «the llanisca marina» and what has been called the «trascuera». The relationship between both territories has been marked by livestock activities and common pastures. On the coastal side, around Llanes, there are several flat mountain ranges that are prelude to Cuera, such as Cué and Pimiango, others more inland, such as Purón, La Borbolla or Los Carriles. In all these minor mountains we find flirty villages and quality rural accommodation from which to start an infinite number of routes.

To the north, the slope of the mountain does not allow to locate any hamlet, only the village of El Mazucu dares to look out to the first foothills following the crevice of La Tornería. In its slope at, near the Picos de Europa, we find numerous villages from Cabrera such as Ortigueru, Pandiello, Puertas, Asiegu, Arangas ... in all of them we will find comforting rural houses and good food for excursions on the way to the affordable peaks of Cuera.

The Turbine Peak, with 1.315 meters altitude is the highest point of this small mountain range and perhaps the most desirable walking route. Then we suggest a few excursions along the Cuera including the ascension to the Turbine.

The entire perimeter of the Sierra is covered by roads of certain importance: to the North the N-634, that crosses the llansal rasa, and to the South the Regional AS-114, that crosses the valley of the Cares. The transverse communications are limited to the N-621 that connects the councils of Ribadedeva and Peñamellera Baja on the East, and the Regional AS-115 that communicates Llanes with Cabrales on the West through the Altu de Ortigueru.

Approximate duration: 6 hours.
Slope: 950 meters.
Difficulty: medium. It can be done at any time of the year although it is preferable to avoid fog and rainy days.

The shortest climb to Turbina, which is not the simplest, starts at the Cruz or De la Mina del Oso pass (400 m.), On the road that connects Arangas and Peñamellera Alta. From this point ascends a wide mining track of considerable slope that takes us to the cabin, meadow and fountain of Trebes (45 '). The track ends in front of the mouth of the Bear or the French mine. It was underground and produced iron and manganese.

We leave Trebes and follow the old road that reaches the Sellón pass (1h.10 '). There, it joins the track that climbs from Arangas to enter the Gobiu channel. The ascent ends at the pass of Concha Gobiu (2h.20 '), at the feet of Peña Llacia (1.228 m.). This is an excellent viewpoint of the Massif Central de Picos, between whose summits the Naranjo de Bulnes silhouette clearly stands out.

We continue on a path (right) that leads us to the braña Piedra del Oso (2h.35 '). It is an area of ​​meadows dotted with beech trees and overlooking the valley of Cares. We found numerous cabins, some inhabited during most of the year, and a fountain.

The best way to tackle from here the Pico Turbina and its twin Terenosu is a well-marked path that allows us to overcome a hill and enter a treeless area. The final climb is comfortable and is done by footpath to the double top (3h.20 '). At the top we find a cross, an IGN vertex, a shelter, an antenna fed with solar panels and a stone marker that acts as a mailbox. The views are again excellent, especially the coast of Llanes, which is at our feet. The return is done by the same path used in the upload (6h.20 ').

The route begins in the village of Asiego. At the end of it, leaving behind the trough and the fountain, we take a track with good slope that takes us to the Majada de Tebrandi. We continue along the path leaving a closed farm on the left. The path climbs in a zigzag to the cabins of La Mata, there you take a path that leads to the Vega de Brañes with beautiful cabins. To the north of this sheepfold we have the Peña Blanca peak, on top of which is the geodesic landmark. From there the views are spectacular. The descent is made through the same itinerary.

Medium difficulty. Between 4 hours and a half and five and a half of travel.

This route is one way only, so we need a car or a taxi service. We must leave at the top of the Tornería and pick up in the town of Purón.

From the center of the town of Llanes we take the road that runs through the towns of Pancar and Parres to the junction of Santa Marina. We follow the road on the right, narrow and winding, and we reach the Altu la Turnería. Approximate distance from Llanes to the Altu la Turnería: 10 km. In the Altu we take to the left a track that, in slight ascent, brings us to the cabin and meadow of Los Corros. Here we will follow the path on the right to the Collau los Corros cabin. We now leave the path and take a path to the left that descends slightly and passes through a rocky area. Soon we crossed meadows and huts and followed the hillside to reach the old flock of La Embía, a beautiful place surrounded by large beech, spinet, ash, chestnut, hazel and some holly, which still remains of pastoral huts. We continue descending to Llosa de Viango. Wide area of ​​pastures, practically flat, almost dreamlike and fabulous place for recreation. There is a small lagoon and several ponds here. As we move through La Llosa it narrows into a funnel. The road now goes in a slight ascent to the colláu from which we see a new valley: that of La Mardola. We crossed pasture areas and cabins and reached the bottom of the valley. The path now descends slightly to the Tornu River. We have to cross the river and ascend to a beautiful area of ​​pastures and cabins, called Pruneda. From here, and by a wide gravel track, we descend to the town of Purón.

to 6,45 km The hotel, a new building, is located in what was an old estate populated by apple trees, the old palm trees and magnolia trees have been preserved, as well as the fence that ...

to 6,49 km We offer the most exquisite dishes made with first quality products. Our menu offers both traditional Asturian cuisine and our signature cuisine.

to 6,52 km We begin our visit with the main house, architecturally dreamy mixing stone and traditional wood with a state-of-the-art window on the second floor. In this space ...

to 6,57 km The rural environment of the village recreates its own past and, in the abstract, tries to summarize the compendium of Asturiania. About a hundred artisans (fabrics, espadrilles, gastronomy ...

to 6,77 km We give you in detail everything you are going to find: Access: by car Length: 220 meters Width: 40 meters Occupancy: Alto Paseo Maritimo: Yes Composition: Bowling / Arena B ...
See more things near here

Located 1.315 meters above sea level, Pico Turbina (listed as one of the highest altitudes closest to ...

Picu Mediodía: viewpoint of the East of Asturias

The San Jorge valley is a small region with its own personality within the municipality of Llanes. Limited to the East and ...

Our 3-star hotel is located in the beautiful town of Andrín, in a very quiet setting on the coastal plain ...

We have recently opened two apartments in the town of Andrín, attached to our hotel. One is located in ...