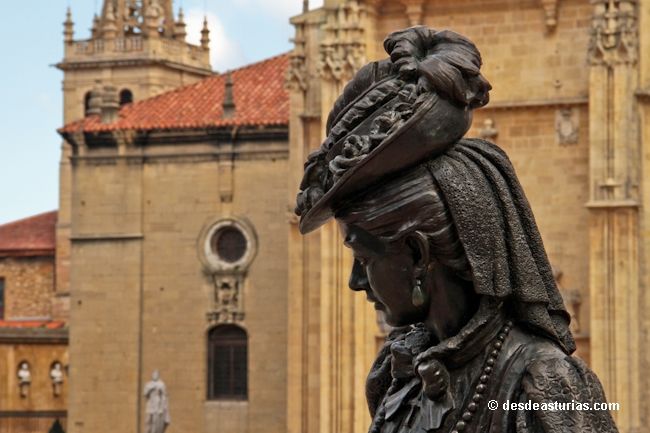 The sculptures of Oviedo

Oviedo through its statues

Oviedo through its statues

In recent years the city of Oviedo has experienced a notable increase in its urban attractions, partly due to the rise of public sculpture, which proliferates in every corner.

Everyone is photographed with the most representative works of the cityHe touches them, embraces them, feels them as immortal symbols of the Oviedo landscape. The streets of the capital of the Principality thus become an open and interactive museum twenty-four hours a day.

Walking from one side of the city to the other, following a street map that is variable but centered on the sculptural, we can talk about a route of the sculptures. A route that is not prefixed or requires to see them all (hundreds).

Oviedo is above all a pedestrian city, comfortable for passers-by. Film director Woody Allen2002 Prince of Asturias Award for the Arts, he knows this well. Walking through its streets, he left a good number of compliments and accurate analyzes for local history. Oviedo is a «delicious, exotic, beautiful and pedestrianized city; It is as if it does not belong to this world, as if it does not exist ... like a fairy tale. Oviedo is, according to him, an “isolated but very beautiful” territory, which gives him the feeling of being out of reality: “in a protected atmosphere”.

Since the prestigious Allen was pronounced in this way, in the Asturian capital they looked for the way to thank him for these words and to render him cult secular. The statue of Woody Allen that now "walks" in the heart of the city surprised the director himself in a visit to Asturias in May of 2005. A well-known regional newspaper titled the meeting in this way "Allen knows Allen". After observing her carefully Woody told her companions that it was very difficult to react to the statue of oneself. Later, in a hearing in the auditorium, he left for the story a phrase that could well fit into his large list of famous quotes, or in the ironic dialogue of one of his films: "I would like to come every year to put a wreath of flowers".

The fact is that the statue of the great Woody, the only officially known on the planet, is now one of the hallmarks of the city ​​of Oviedo. Many are portrayed together with the great filmmaker. They mimic their pose: they slightly advance their left foot and put their hands in their pockets, adopt a pensive countenance and almost forget that what is walking beside them is a statue.

Another honoree at the Prince of Asturias Awards, Joaquín Salvador Lavado Tejón «Quino«, He has seen how Oviedo has a privileged seat for the girl in his eyes: Mafalda, waiting for us on a central bench in the San Francisco field with a smiling face.

Oviedo and the sculptures of the old town

The fondness to be photographed with the statues of Oviedo began in the year 1993, when thousands of tourists already stopped to be photographed with the lonely male figure who watches the distance from the Plaza de Porlier, leaning on a trunk, with his feet surrounded by suitcases . Is The return of Williams B. Arrensberg, by Eduardo Úrculo, popularly known as "the traveler". A pioneering work of its kind, which fills the historic center of Oviedo with nostalgia, but also with an adventurous and detective flavor. For Úrculo, certain objects such as suitcases, coats, benches and - especially - hats are loaded with symbolism about the human condition.

In the square of the cathedral we find another fictional character. A bronze woman who walks immobile in her period costume. It's Ana Ozores, The Regenta, that lived in the imaginary Oviedo (Vetusta) of Leopoldo Alas Clarín and that with this retort lasts forever outside the novel; in eternal coexistence with citizenship.

Fernando Botero came to give Oviedo his most rounded sculpture. The brilliant Colombian artist contributes to the basic route of the sculptures with a huge work, well polished bronze and without sharp edges or edges. The great Maternity, queen and lady of the Plaza de la Escandalera, with her more than 800 kilograms of weight, she holds in her arms the thickest baby that can be conceived.

Fatness and disproportion also affect the sculpture that was the most talked about in Oviedo when it was placed next to the Campoamor Theater in the 2001 year. The Culis Monumentalibus, of Úrculo, has no hidden meaning in principle, it is an ass with all the letters. A superculus, we could conclude, raised by a rotund jambs more than 4 meters high. Although it weighs more than a ton seems to want to take off to the sky in search of a back that gives a little dignity.

There are hundreds of sculptures that are scattered in every corner of the city, from San Francisco Park to the most recondite sites. The style is varied, although the figurative tendency clearly predominates. The biological cow, by Cuco Suárez, is the most avant-garde sculpture of all. Located in the winter park, it is made of methacrylate and its transparency reveals an illuminated neon circuit that highlights the internal functions of the animal: food, blood, respiratory ... Its night vision is surprising.

Asturias, its customs, its traditional crafts are a constant in many of the sculptures that adorn Oviedo: The vendors of Fontán. At the Plaza del Fontán; The milkmaid y The fish seller, placed in the Plaza de Trascorrales; Guisandera in Gascona street; or the popular photo The bullfighter, immortalized in the San Francisco Park, are good examples of this theme.

There are many sculptures that remain to be described, although in our walk through Oviedo we are going to step out: Monument to Concord, in the Plaza Carbayón; Peace, on the Prince of Asturias Foundation Avenue; Life, in the Plaza Hermandad de Donantes; Violinist, in the Plaza de la Gesta; El Diestro at Palacio Valdés; Beggar with dogs in the street Alejandro Casona; The asturcones, in the Plaza de la Escandalera, and a long etcetera.

Presiding over this huge mosaic of inanimate beings is the largest sculpture in the city, The Sacred Heart of Jesus, on the summit of Mount Naranco. From there breathes life to all, be they of flesh and blood, stone or bronze.

to 0,26 km The NH Oviedo Principado Hotel is located in one of the streets of the old town, in front of the historic University of Oviedo, an excellent location since we are 400 meters from the c ...

to 0,64 km The Room Mate Marcos is installed in a central area of ​​the capital of Oviedo, about 5 minutes walk from the Cathedral of Oviedo, the Fontán market or the Plaza del Ayuntamiento. Its deco ...

to 0,83 km The Eurostars Hotel de la Reconquista is an emblematic hotel of the city of Oviedo, it is not in vain that the winners of the Princess of Asturias Awards stay there annually, it occupies a building ...

to 0,01 km Jovellanos, in his Diaries, talks about the fabas or Asturian beans, which shows that, at least since the XNUMXth century, this crop was widespread throughout the Principality, already gestating the ...

to 0,01 km Since those 80s, when some ventured into something very new - at that time - a lot of time has passed and rural tourism in Asturias has been developing along the way ...

Antroxu, the carnival in Asturias

to 0,01 km In these days, prior to the defeat of Don Carnal and the reign for forty days of the grim Lent, Asturians feel the urge to mutate into new entities. Traditionally ...
See more things near here

Oviedo, capital of the Principality of Asturias, is a welcoming city that grows at the foot of Mount Naranco. Oviedo is a ...

Now, with the beginning of the new millennium and the complete cleaning of the cathedral's surface, its rejuvenated appearance dies ...

The gastronomy of Oviedo

Opened in 1980 and dependent on the Principality, the museum occupies two historical buildings: the sumptuous Palacio de Velard ...