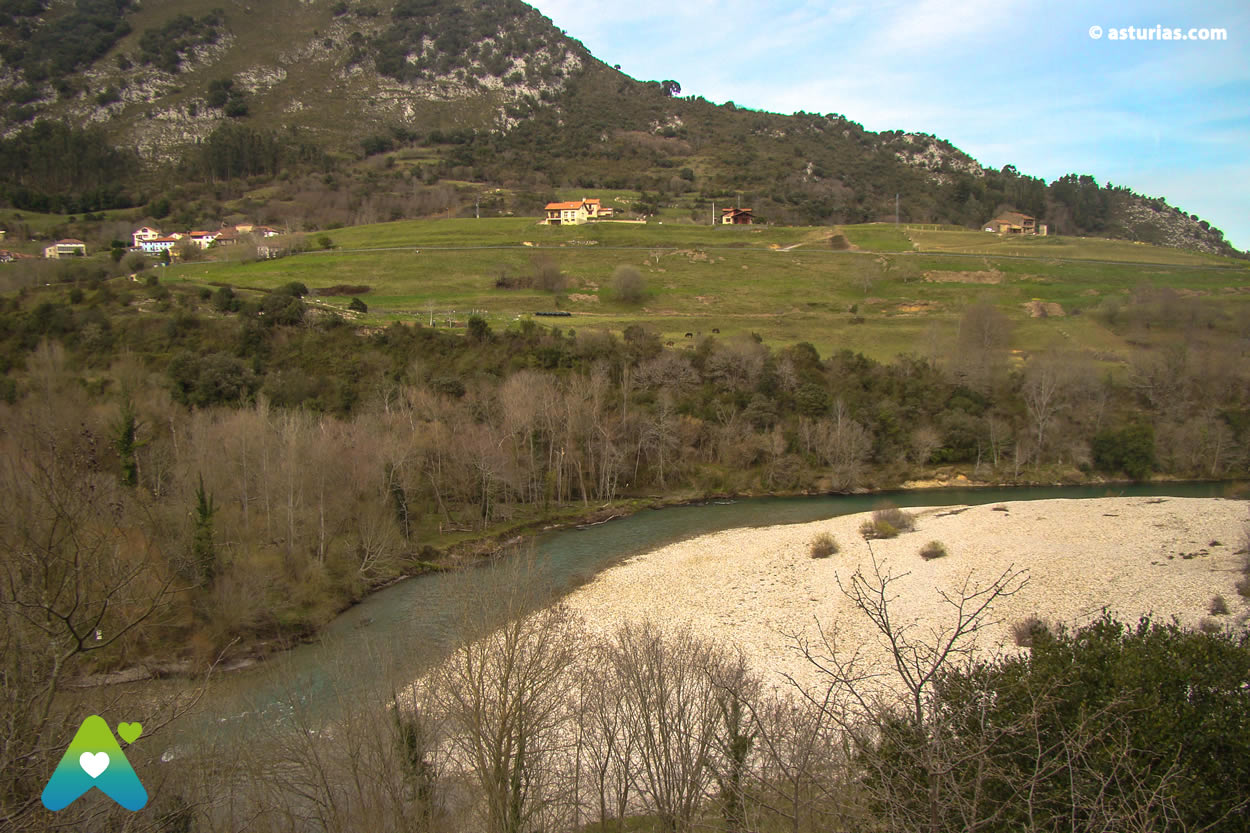 The most natural shores

The most natural shores

On the banks of the River Deva, between the towns of El Mazo and Buelles, in the municipality of Peñamellera Baja, very close to the eastern limit with Cantabria, we find one of the most beautiful fluvial vegas of Asturias. Declared Natural Monument, the willow of Buelles is a nearby jungle, a dense and wild place that allows the passage in its interior through a coastal road but that demands the maximum environmental respect.

It is already known that the willows They prefer deep, moist soils, growing luxuriant even in water. This peculiar habitat that they seek is that which allows us to walk along this shore of the Deva under the shade of their canopies, a shadow that in some points becomes impenetrable, when the forest reaches its maximum density.

The banks of the Asturian rivers were populated with the most diverse forests in species. However, as these are environments with high agricultural productivity, a large part of the riverside forests have been cleared. Hence the importance of this willow that continues to grow in the middle reaches of the Deva and that constitutes a fertile plain in optimal condition, more typical of the past.

The banks of the rivers Cuadalosos like the Deva, very appropriate to be flooded by the water, is the place where the most resistant species of willows finally managed to be implanted. Everything is fruit of an adaptation process very long and laborious. The exemplary vitality of the willow of Buelles has been created as a fort, trunk by trunk and little by little; through the passage of time and water. This riparian forest has been defended with nails and teeth thanks to a first potección waist made up of shrubby willows, perfectly adapted to withstand the onslaught of fluvial avenues. After them we find a second waist tree willow trees: probably the largest and best developed of the entire Cantabrian coast.

We are already a little further away from the channel, in areas that do not suffer the mechanical effect of the flood but that are periodically flooded by the waters. Here is dominant the white willow (Salix alba), a species of great size. Usually these more interior willows have been one of the environments that have suffered the most human aggression, given the extreme fertility of the soils on which they settle. In Buelles, however, this aggression is not known, turning it into a riverbank of exceptional natural and patrimonial interest.

El Fauna interest It is also considerable. There are breeding colonies of sapper (Riparia riparia) in the area, and otters (Lutra lutra) and lamprey (Petromyzon marinus) are also common. These species are included in the Regional Catalog of Endangered Species of Asturian Wildlife.

In addition, other interesting and bioindicating species of water quality are present, such as Atlantic salmon (Salmo salar) and desman (Galemys pyrenaicus).

Furthermore, the village of Buelles, as well as other surrounding areas close to the willow that bears his name, present an attraction more than the strictly natural one. Indian real estate dot the rural landscape in this area. As it happens in general in all Peñamellera Baja. The wealth of architectural heritage in this muncipio he takes care of himself, and he deserves an attentive and leisurely visit.

Location: Council of Peñamellera Baja. The Natural Monument includes the willow trees that border the two banks of the River Deva, in the stretch of river located between the towns of El Mazu, Narganes and Buelles, in the council of Peñamellera Baja, including the willows and fragments of alderwood of the shore, the beaches of ridges and the slopes that are in both margins and the same bed or smaller bed of the river.

Access: The N-621, from Panes to Unquera, crosses the towns of El Mazo and Buelles; the AS-343, from Villanueva (Ribadedeva) to Siejo (Peñamellera Baja), which runs along the left bank of the river, passes through the center of Narganes.

to 0,17 km Old stable completely rehabilitated, maintaining its structure and materials. Nestled in a small village at the foot of the river Deva, a short distance ...

to 0,22 km Located in the town of Buelles on the border between Asturias and Cantabria, very close to the coast (8 km.) And the Picos de Europa National Park. In a p ...

to 1,67 km The house was built at the beginning of the XNUMXth century and completely renovated, maintaining its traditional structure and adapting it to current comforts ...

to 4,21 km Capital of the municipality of Ribadedeva, this town could have become an important city if the intentions of its...

to 4,22 km Where is the Archivo de Indianos located? The house where the archive-museum is located was built by the immigrant to Mexico Iñigo Noriega Laso, who ...

to 4,25 km In Colombres, Ribadedeva, the enriched Indians radically transformed the small rural village into a modern villa, with colorful architecture ...