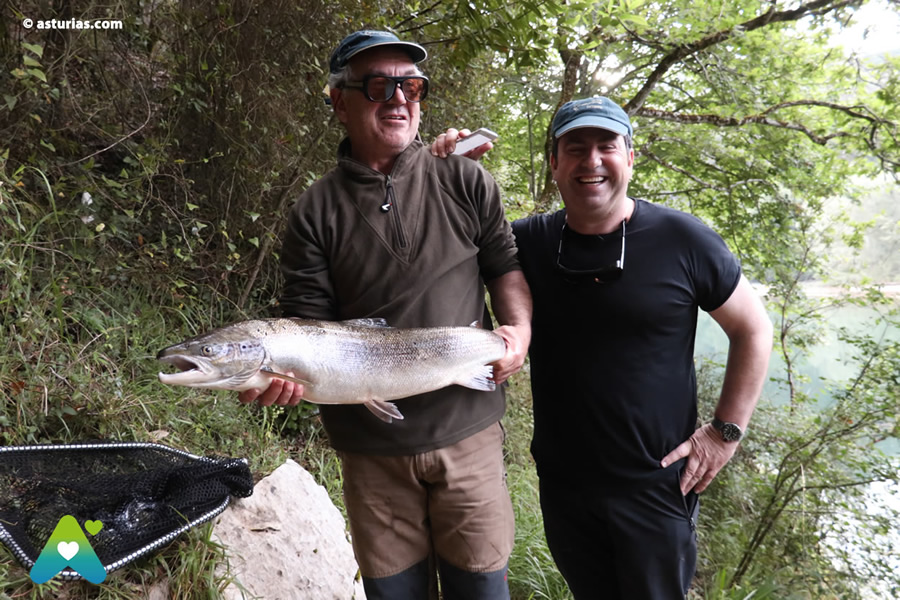 Going up the rivers

Going up the rivers

There are biological investigations who claim that the Asturian salmon is the oldest in Europe, being the most direct descendant of those others that during the ice age, about 40.000 years ago, began to seek refuge in the headwaters of the rivers that poured their waters into the Bay of Biscay .

It has been a long time since then, but nobody seems to doubt the tradition of native salmon. Today, its meat is also one of the most expensive and, perhaps, the most tasty of the continent's rivers. his high quote It obeys both the quality of the species and the current scarcity, which contrasts with the abundance of yesteryear.

In the 18th century, during the coast, more than 12.000 salmon were caught only in the Sella. In the Benedictine monastery of San Pedro de Villanueva, in Cangas de Onís, the neighbors of the council that provided services to the monks came to demand "that no food would be given salmon more than twice a week." Similar conditions were imposed by workers who worked in other riverside towns such as Pravia, Pola de Laviana or Cangas del Narcea.

In the village of Pravia we can see up close a reproduction of 400 kilos of weight of an old salmon fishing machine. Although now strictly prohibited, at the time it was raging on the banks of Narcea. The armatroste in question, designed by the Frenchman Martín Duhart in 1865, is a giant mechanism that consists of several blades and that in its moment it took out the salmon in mass of the water.

With a salmon past of such magnitude, it is not surprising that the fishing of this species continues to be an annual event in the Principality. The expectation is huge throughout the season, especially when the starting gun is given. In the month of March begins the hunt and capture of the popular Campanu, the first salmon of the year. Throughout the campaign, the passage of time is recorded in pieces and feats, raffles, fishing grounds, baits used ... good and bad leg.

The season ends in the middle or end of July. Generally, the salmon fishing authorization is limited to the main river beds: Eo, Porcía, Navia, Narcea, Nalón, Sella, Cares, Deva and the Esva.

The gradual shortage of catches seems to hit bottom in the 90 years of the twentieth century. 1997 barely exceeded the exemplary 700 throughout the autonomous community. However, 2001 was breaking a record of recent history, reaching the not insignificant number of 2.779 pieces. In Asturias salmon are currently caught more than in the rest of the Iberian Peninsula.

The improvement in the quality of the waters of the Asturian rivers, certain regulation of salmon fishing on the high seas and, above all, repopulation with fingerlings, are the causes attributed to this progressive recovery. If the thing continues like this, it can be thought that the salmon gastronomy will be extended little by little to a less exclusive public. Currently the Campanu comes to quote in a big way, exceeding one million pesetas, and is usually acquired by famous restaurants from the capital of Spain to invite great personalities of social, political or sports life of our country.

So that the Asturian salmon becomes cheaper and reaches more mouths, it is necessary to continue advancing with criteria of sustainability. A good example is the Sella, which according to the most recent technical studies, is the best salmon river in Spain. The center of alevinaje of Caño (in Cangas de Onís) has become the natural laboratory of the Asturian salmon. Thanks to their work, tens of thousands of native fingerlings are released to the Sella each year. The marking and subsequent monitoring of the offspring allows to verify the return of many of them in adulthood, after passing through the high seas. The reproduction and artificial spawning that is followed in other parts of Asturias result in more than half a million annual fry, with which to repopulate all the salmon basins of the region.

If we focus on the particular history of these salmonids, we will not cease to be surprised by the life they suffer so long as they perpetuate themselves. Climb the rivers and reproduce it is the same thing: an eternal return, the search for the origin, the end of its existence. Salar Salmon, or Atlantic Salmon, which is the one we find in the Principality, only traces rivers when it has a large size, up to one meter in length and a little more than 15 kg of weight. Its body is slender, the flanks silver and the back of metallic blue color, covered with dark spots. It is the romantic dress of the male salmon. At the time of mating, the silver color turns coppery and the lower jaw develops noticeably, curving upwards to form a kind of hook.

After fecundation, the high temperatures of the Asturian rivers allow a rapid development of the fry. At the end of its first summer of life it can reach from 8 to 10 cm in length. During your stay in the rivers, one or two years, they are cannon fodder for otters, fishing birds, large trout and even their own congeners, which significantly reduces the numbers. The first or second spring arrives and deep morphological and physiological changes occur in them, as they prepare to make the leap to the living conditions of the marine waters.

Already in the sea they live in remote areas, in cold and nutrient-rich areas. Salmon from the Atlantic coast are concentrated south of Greenland. There they spend one, two or three years. After this stage, they return as prodigal sons to their rivers to procreate. And so, these survivors, unparalleled travelers and hardened nostalgics, return to their land in the foreseen time, as if they had in their heads all the oceanic cartography and an infallible agenda.

Back to the river they can no longer feed themselves ... their metabolism has adapted to the marine diet and they must survive on the accumulated reserves. If no fisherman can remedy it, the process of going up the river and reproducing will be exhausting for beings unable to feed themselves. Therefore, the salmon already spawned, strides, they remain scarcely without energy reserves, many of them even dying, waiting for the spring floods to drag them back to the sea they begin to miss.

Here we offer you a couple of recipes simple to get all the flavor of a salmon, if you are lucky and the fish is Asturian, you will enjoy these dishes doubly:

Salmon a la Ribereña
Slices of salmon are passed through flour and lightly fried in oil and butter-you can also put some pork fat-then wet with a little fish stock and half a glass of cider. Leave about five minutes to the fire, you can also put it in the oven; then the salmon is removed, cleaned thoroughly and placed in a dish. The sauce is passed through a sieve and poured over the salmon. It is served hot with a garnish according to taste, which can be asparagus, tomato, boiled potatoes, etc.

Salmon with butter
The salmon is cleaned and sliced; fry in hot oil after seasoning with salt; fried and spread the slices with butter on both sides, place in a baking dish, add a nice glass of champagne or cider -better champagne- and put in a strong oven for ten minutes or less .
They are served in the same oven source; or they are passed on to another and decorated with lettuce leaves.

to 0,37 km Nowadays, Cangas de Onís has become an important tourism center, thanks to its scenic beauty, its history and art, its gastronomy ...

to 0,44 km The Lagos de Covadonga Classic Cycle Tour is one of the most surprising sporting events in the Bay of Biscay. With almost 2.000 participants, the se...

to 0,63 km The classroom, a cultural facility that glimpses great historical horizons, is located in the old church of Cangas de Arriba and seeks a closer ...

to 0,65 km The Sunday market in Cangas de Onís is the most authentic souk in the eastern region of Asturias. Jovellanos in the Diaries of him described this market of ...

to 0,66 km ONLINE RESERVATIONS Our APARTMENTS in the urban area of ​​CANGAS DE ONÍS, make up the other part of "ALOJAMIENTOS FERMÍN". Distributed in different ...

to 0,66 km Fermín Accommodations 2-star FAMILY-friendly guesthouse, it is located in the URBAN CENTER OF CANGAS DE ONÍS in a quiet area, with numerous ...

Hunting and fishing in Asturias