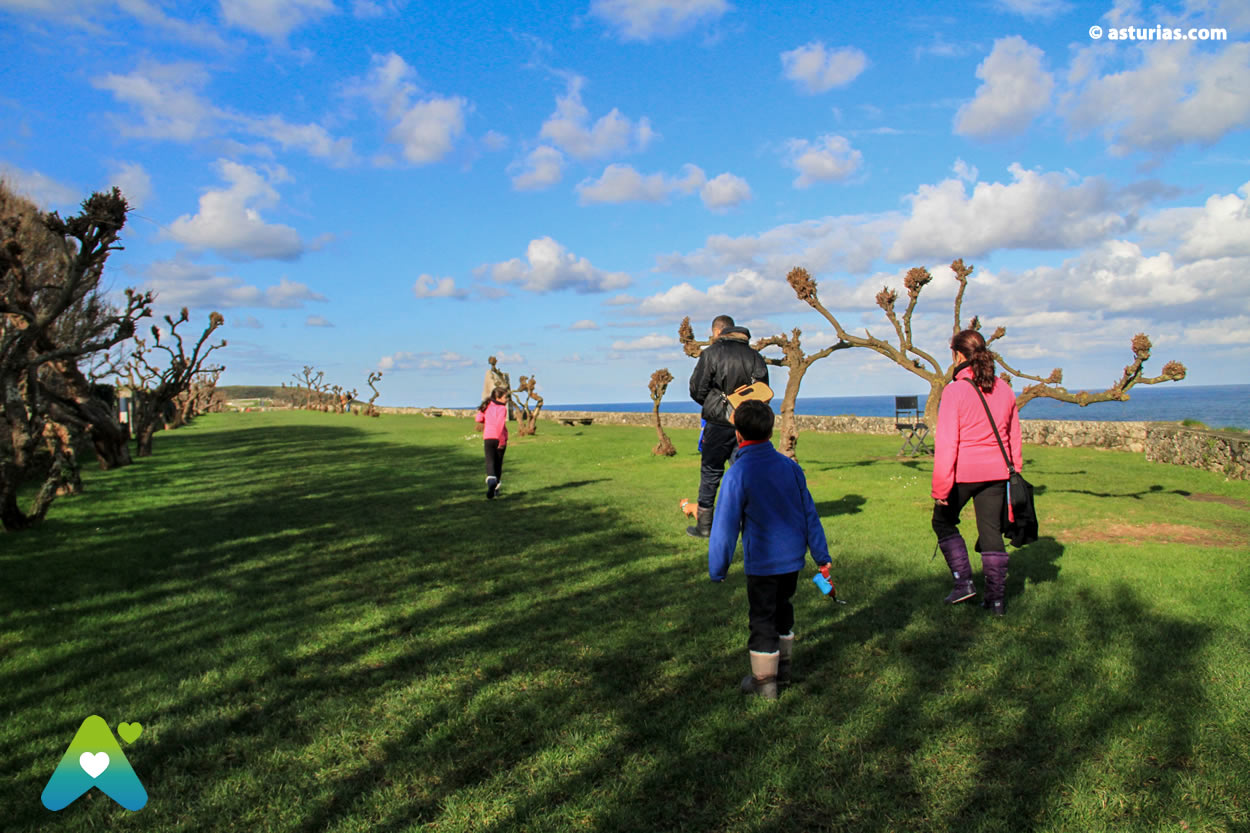 A sea of ​​sensations

A sea of ​​sensations

The Paseo de San Pedro is one of the nerve centers of the town of Llanes. At least it is for the visitor, surprised after finding a viewpoint of this nature a few meters from the town.

It offers us a panoramic view that largely sums up the most Asturian landscape: the Cantabrian Sea that stretches everywhere, the cliff coastline on which we walk and whose profiles continue on the horizon (specifically from the Castro de Póo to the tip of Suances if the day is clear), the northern mountain range behind us and a A seaside town with a beach included -a coquettish cove between rocks- at our feet. A unique balcony which is at the same time an anti-stress space, with its mantle of well-kept Asturian grass on which we could walk barefoot along its kilometer of route.

How to get to Paseo San Pedro

Access to the promenade does not present special difficulties and it is easy to locate visually. It can be reached either by going around the old town on your left or by skirting the town through its fishing port until get to the Sablon beach. From there, stairs lead up to the promenade itself. We immediately appreciated its magic and turned to the camera or mobile to immortalize the moment. Is this one of the most photographed places in the region. It also arouses the interest of film cameras, as Garci himself shot here a scene from his movie "Story of a kiss."

It was built in the XIX century, more specifically in the 1847 year, with the idea of ​​providing a place of recreation to the neighborhood. The work was last in good part with the arrival of capitals of Indian emigrants. It is clear that the choice of the place was ideal, because in addition to strictly comply with its role of recreation, is nowadays one of the largest tourist attractions in the town. Other of its virtues are to serve as a stage for romanticism, nostalgia, contemplation and self-absorbed calm. Far away is its tough mission as a defensive watchtower against the enemy or as a strategic place for whale watching.

There are few decorative elements along this walk, something that confers a tone of solitude to the place and that allows us extend the view without obstacles Just a few benches to sit on and tiny trees whose shapes can be disturbing if the horizon turns black. It is about a dozen fragile tamarinds planted in the last quarter of the nineteenth century and that today cling to the earth and seem to feed on the eyes of visitors.

Thanks to this natural catwalk, about eight meters wide, we observe in detail the wall of the medieval city, with its characteristic tower and the most important churches. On one side, the small fishing port of the fishing village and a peculiar perspective of «The cubes of memory», the work in which Agustín Ibarrola captured his concept of art on the jetty of the port. Immediately behind the houses, the imposing Sierra de Cuera seems to be two steps from the sea with its peaks of almost 2.000 meters high. After her, weather permitting, the Picos de Europa peek to crown the panoramic.

The Cubes of Memory

Since the work was inaugurated at the end of 2001, the Memory Cubes have already convened a ...

The walk is integrated into the more general of the coastal path of Llanes, which crosses the entire municipality, has now been extended from the original 300 meters to almost a kilometer in length to connect with the course of this path that continues its march to the west, on the way to San Antolín beach.

They are more than 30 kilometers long for hiking or cycling. It passes through the ...

Route of Eleanor of Austria

By chance, in 1517 they arrived at the town of LLanes who would be King Carlos I of Spain and V of Germany, and his sister Leonor. Today the route that the princess would take through the town has been recovered, passing through seven locations. A good urban walk that brings us closer to the essential points of Llanes.

Hand in hand with Princess Eleanor of Austria we will travel through Llanes in 1517 and thus also return to space ...

to 0,16 km The secluded Sablón beach is located in the urban center of Llanes so there is a high influx of public, it has a promenade and a good ...

to 0,18 km Along the 35 kilometers of coastline of Llanes, an unusual density of villages awaits, and a sandy rut with statistically probable coves with ...

to 0,28 km Our apartments are located 100 meters from the Sablon beach, in the center of Llanes, but in a quiet area. They are new floors and all are ...

to 0,33 km Leonor and Carlos arrived in the town of Llanes after leaving Hiddelburgo 19 days before, deviating from their initial destination: Santander. The royal entourage ...

to 0,36 km The Magdalena festivities on July 22; San Roque, on August 16, and the Guide, on September 8, are events full of devotion and rites that take place ...

to 0,36 km The Verdemar Apartments [VUT] are located in the center of Llanes, next to the Playa del Sablón and the old town, where you can enjoy the ...