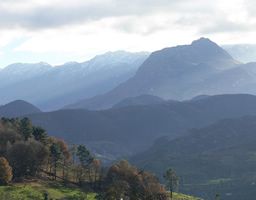 There are ports and mountain ports. At the time of climbing them on foot with the cattle, or by bicycle, we can classify them as affordable, normal, hard and practically inhuman. The Angliru, located in full Sierra del Aramo in the council of Riosa, just 20 kilometers from Oviedo, is today world famous for its hardness in the cycling events. Since The return to Spain It arrived for the first time at its peak in 1999, the legend has gotten bigger every day. In the eighth stage of that round, the José María Jiménez from Avila made history as the first conqueror of the Angliru.

To the top of the Angliru habitually, in all Europe, it is compared with the Mortirolo, because they have very similar global numbers, with rises of 12,5 kms in length and an average slope close to 10 percent. Both are considered to be the toughest cycling summits. The Angliru, concretely, has a not very hard start and six hard final kilometers, with a section that goes out of all logic: the famous Cueña les Cabres, which exceeds the 23 percentage of unevenness.

Physics data say that at an 13 percent unevenness, a climber that rolls at 12 km / h generates a power of about 315 watts, of which it uses a 93,5 percent to beat gravity and an 2,8 percent in overcoming air resistance. These figures become more unlikely in the case of the Angliru, which was named by the farmers of the area with a name that derives from the Latin angulum, plus the termination ariu (angled place). When we walk through the mountains of this port dotted with uniform peaks, the sun falls so vertical that one goes treading its own complete shadow up to the head. The somber angles, the nooks and crannies of the rocks, are essential for men and cattle to clear hot flashes before reaching the top.

Although crowning their 1570 meters it is not an easy task, from above we verify that the effort has been worthwhile. You can see beautiful landscapes of the central Asturian mountain, with the Gamonal peaks, to the north, with 1.712 meters of altitude, and Moncuevu, to the south, with 1.718 meters. It can be reached on foot from the Angliru summit until the top of the Gamonal On an excursion of less than an hour with good weather. If the day is clear, we will see from the Asturian coast to the Picos de Europa.

The Sierra del Aramo, where this mythical rise is located, offers a rural landscape barely altered that is worth knowing. The Angliru could well serve as the first excursion for this spy, since its views allow us to get a clear idea of ​​the profiles of this mountain range and the many excursions that it can offer us.

As a myth of cycling, which constitutes a very attractive challenge for bicycle fans. In fact, hundreds of cycling enthusiasts climb the Angliru throughout the year. They do it to test themselves and measure their resistance. Climb alone or integrated into groups and cyclists. There are also those who run up. The first Saturday of October, a pedestrian race that is approaching its tenth edition, concentrates almost a thousand suffering participants.

For the most comfortable there is always the option of climbing the Angliru by car. The track is asphalted and in good condition, but it is narrow, full of curves and slopes that are not common for drivers who are not used to these mountain roads. There are "quitamiedos" all the way, but still the feeling may be too strong for those who are not accustomed.

How to get there:

In the N-630 that connects Oviedo with Mieres, we must deviate on the right towards the town of Santa Eulalia by the AS-231. You pass the towns of Las Mazas and La Foz until you reach La Vega de Riosa where you take a deviation to the right to begin the ascent. The first 6 kilometers are relatively simple until you reach the recreational area of ​​Villaparada. The maximum difference in this first part is 8 percent. Then there are the most difficult 6 kilometers. We find Les Cabanes Curves with a difference of 20 percent during 150 meters. The next curve is Llagos where the difference is 14,5. Next are the Curve Los Picones (18) and La Curva Cobayos (17), these lead to La Cueña Les Cabres where the drop reaches 23,5 percent for about 500 meters. The last slope is that of Aviru with a slope of 19 percent. Text: © Ramón Molleda for asturias.com

to 10,94 km By creating the Bonalife space, we wanted to be part of nature without our presence being noticed. This is how Buenavida and Vidabuena were born, two stone houses completely rehabilitated ...

to 11,08 km12th century mansion in the center of Proaza, surrounded by beautiful gardens.The XNUMX rooms at La Casona have furniture that combines a modern and colonial style. All ...

to 12,48 km La Pumariega is a village house for rent by rooms that offers you five cozy double rooms, equipped with a full bathroom and flat-screen television.

to 6,11 km Today, Asturian milk is one of the most valued and consumed in Spain. Historically, the Principality's dairy products have grown in prestige. The pastures of the region, the i ...

to 6,31 km It has enjoyed the Protected Designation of Origin since 2004. This cheese is unique in its semantics, it bears the name in Asturian and does not admit an exact translation or an etymology ...

to 8,95 km Fans of mycology are clear: Asturias is a mushroom paradise. At the foot of its oak and chestnut groves grow, among others, boils, catharellus and russulas; Under the...
See more things near here

The Peña Ubiña Massif is behind the Picos de Europa the main mountainous system of the Cantabrian Mountains. The r ...

Since 2004 it has enjoyed the Protected Designation of Origin. This cheese is unique in its semantics, it bears the ...