Path of the Archdeacon

The path with more history

The path with more history

Among the many Roman roads, or royal roads, that crossed Asturias and communicated this region with Leon lands, highlights the so-called Senda del Arcediano, which links the region of Cangas de Onís with that of Riaño. The Asturian East communicated since ancient times with the ancient Kingdom of León along this path.
It was a route used by Rome to subdue Cantabrians and AsturiansLater, it became a vehicle for Romanization between the two sides of the port, it served the Muslim invasion and the subsequent reconquest. During the Middle Ages it was used to "transport" the doctrine of the Sahagún monastery. At the end of the first millennium there is talk of "via saliamica" (sajambrina) and of "carrera maiore" (major or royal road).

In the Middle Ages it was a compulsory passage for muleteers. A classic route of passage of travelers and transfer of merchandise that lasted several centuries. For it ran a good part of the products of eastern Asturias that were sold in Meseta, such as reddish pigment obtained from iron oxide, highly demanded inland and gave a new name to the route: Camín del Almagre. The sajambriegos used the route in reverse route to "go to fields", supplying the Asturian area with products that did not exist in its contours, such as wheat or wine. It was also a basic step for the seasonal emigration of the llaniscos tejanos to Leon lands.

Your current name it obeys the will of a XNUMXth-century clergyman, Pedro Díaz de Oseja, Archdeacon of Villaviciosa, who ordered that twenty ducats of his income be paid annually to "dress up" this route, "in need of quarries, wood and bridges."

Today, and after the construction in the nineteenth century of the current Pontón road through the Beyos Gorge, the primitive path has been relegated to a pastoral and tourist role. It is an exceptional tour through beauty of the landscape -conserved intact throughout time- and also for its intelligent layout and for the engineering works of its road. It is halfway through when the original road is best observed and when the path crosses an area of ​​extensive meadows, surrounded by forests of beech and mountains. This great meadow is still known as The DropsFor in the past it was the place where the oxen of the carts were "released" and changed to face the hard climb from the port. All the way we discover green pastures, where cattle abound: cows, sheep, goats and horses; Y lush forests, especially beech, oak and holly, the habitat of a fauna of deer, roe deer, chamois, wild boar, fox, squirrel and mustelidae, as well as numerous birds, including the highly protected grouse. 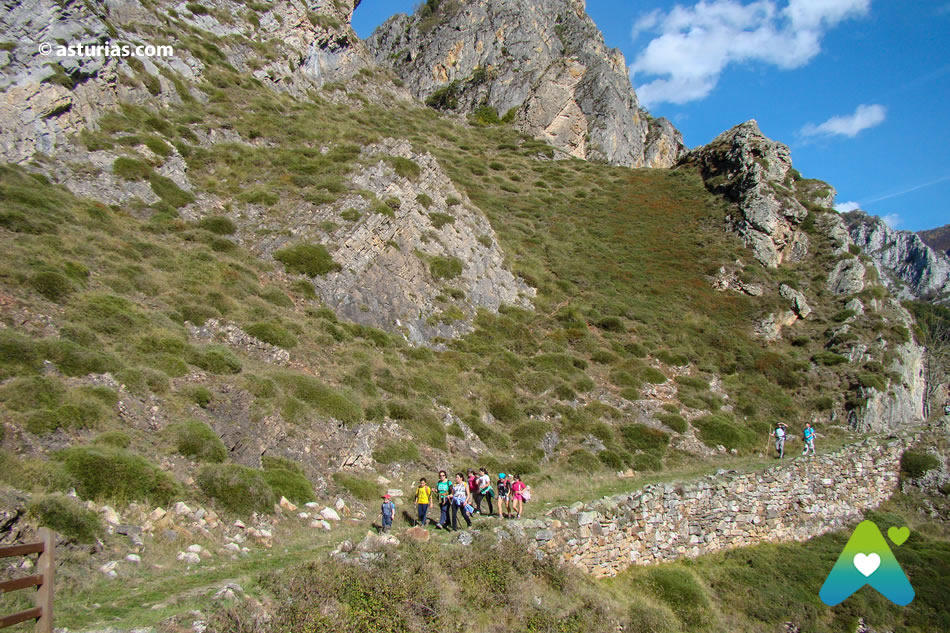 The duration of the route for the Path of the Archdeacon is variable, depending on the section we face. Between Amieva and Puerto del Pontón there is a total distance of close to the 30 kilometers with a hard drop, the complete completion of which would last two or three days.

The stretch (in Amieva territory) between the Beza port and the old bridge over the Dobra, would be for some authors the old Amieva Royal Way, while The Path of the Archdeacon It should be understood as the part of that royal road that goes from the pass of Angón to the port of Pontoon, passing through the Beza port.

According to this, we explain here this last itinerary as the authentic Path of the Archdeacon.

It will take us to travel it between 4 and 5 hours, with some unevenness of some 700 meters of ascent and some 600 of descent.

It is typified as Grand route (GR 201) and the route is fixed by red and white markings that show us the way at all times.
To get to Amieva: from Arriondas we continue to Cangas de Onís, at the entrance of this town we take the N-625 that takes us directly to the council of Amieva.

We start from Angón Hill (also known as cueón Angón, to 825 m). It is reached from Amieva by the concrete track that starts at the entrance to the village and ascends to the Cueries sheepfold. The path then continues along the Cuesta Galgueral and Campo Frade. At our feet we see the Dobra valley. We arrived at El Cantal, the anteroom of the Sabugo sheepfold, a kind of natural viewpoint towards the Dobra's sickle, the majestic Cantu Cabroneru and the Valdepino porra.

We continue by the sheepfold of Sabugo, an ancient settlement that came to have a hermitage dedicated to the Virgin. From Sabugo we will continue to cross the pass of La Batuda, falling to another one of the unique corners of grazing in Amieva: Toneyu. From here, one already ascends to the portza of Beza boundary between the councils of Amieva and Sajambre.

The next step will take us to the pass of Beza, from where, already in permanent descent, we will reach Soto de Sajambre, going through the revolts of the Posadorio and the winter ones of Valdelosciegos.

Another possible itinerary
Another possibility to face this path is to start from León. In this case we can stay at the Refugio de Riaño, where they will advise us on the route.

to 5,88 km Aguas del Sella is a charming rural house, 10 minutes from Cangas de Onís. It is a small apartment for 2 people for full use. It has a p ...

Route of the Beyu Pen

to 6,41 km The Beyu Pen Mythological Route, in the beautiful council of Amieva, is nothing more than an enchanted forest that guards the souls of legendary characters and h ...

to 7,19 km Following the course of the Covadonga spring, which is lost between chasms under Mount Auseva, forces us to make a small detour to find the point ...

to 7,23 km Covadonga also has a lot of historical height. One of its most legendary heights is an unparalleled feat, a historical reference of the first magnitude of the Es ...

to 7,32 km To crown the Picu Pierzu is to reach a new dimension in terms of panoramic views. It is, without a doubt, the best viewpoint in the Pon ...

to 7,72 km We felt like real monarchs for a while, wondering how we got so high, above the mists and low clouds, watching with ...

Canyoning in Asturias: rivers and mountains