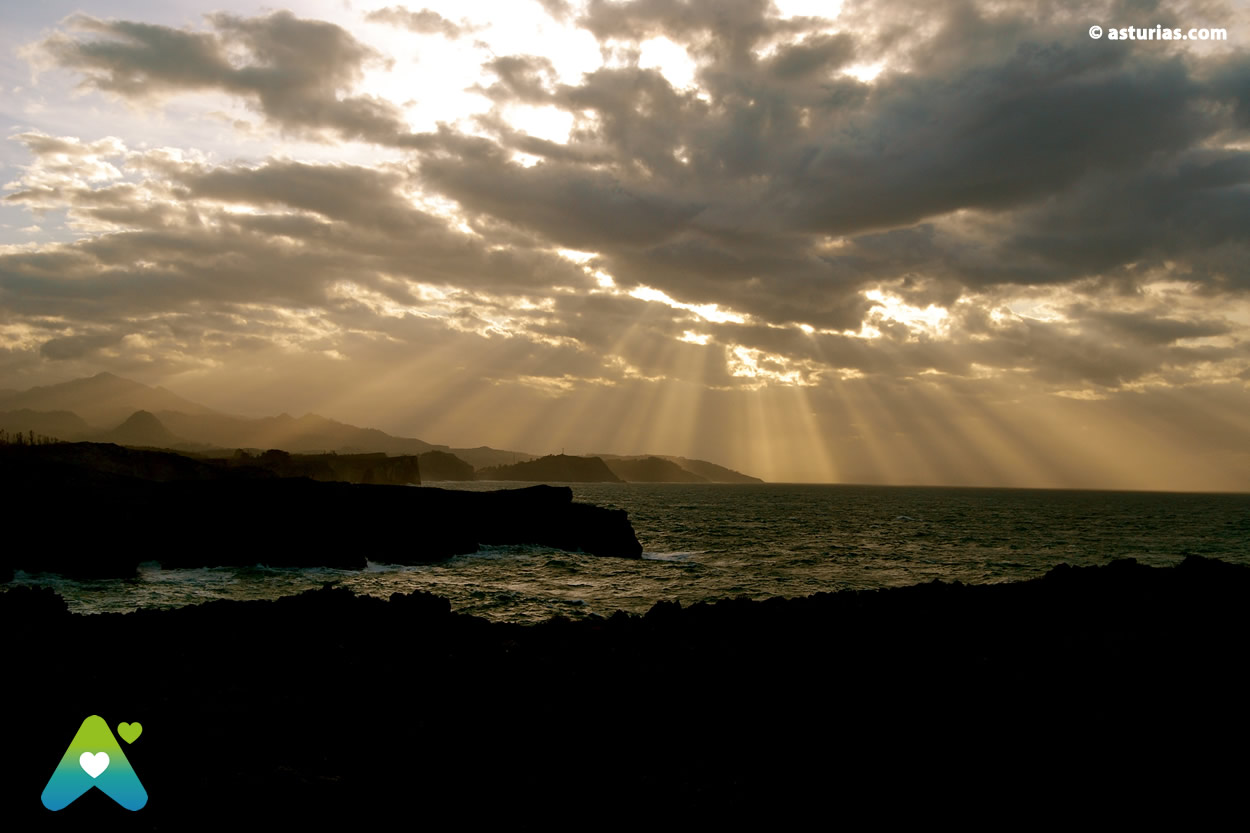 Walking through Asturias you will discover its magic

Walking through Asturias you will discover its magic

Asturias has almost one third of its declared territory Protected Natural Area Of special interest, this is how to preserve this natural heritage and leave it as a legacy of special value to future generations.

Here we present each of these surprising corners for the enjoyment of those who approach them.

In the East of Asturias

The water of the sea rises under pressure by the perforations created in the rock by the karstic action and forms a great spout, a whistle or snort is produced that gives name to the phenomenon. A pedestrian path and cyclist travels much of the Llanco littoral.
[Bufones de Llanes]

These are considered the greatest buffoons of the entire eastern coast, in days of swell the water jet can reach up to 40 meters.

· Cobijeru Complex
In the vicinity of Buelna, council of Llanes.

It includes the interior beach of Las Acacias, which communicates with the sea through two underground conduits, and Cobijero cave, with a gallery that includes a large room with remarkable formations.
[Cobijeru Beach]

· Gulpiyuri Beach
In the town of Naves, council of Llanes.

An interior and sheltered beach of the curious formed mostly by quartz sands. It is flooded with high tides looking like a saltwater pool.
[Gulpiyuri Beach]

This set includes the beach of Vega and its valuable dune system, as well as the contiguous alder trees, developed on the alluvial plain at the mouth of the small stream of Acebo and, also, the rugged quartzite rocks and gorges of Entrepeñas.
[Beach of Vega]

On the banks of the River Deva, walking in the direction of El Mazo, you can walk more than 20 km. next to the most beautiful willow of all the North of Spain. White willows and other tree species at the foot of salmon wells where you can fish. Salmon, trout and prisoners are part of the tasty Peña Melilla brew.
[Sauceda de Buelles]

· Trave system
Cercanías of the Cabrales town of Bulnes.

The Trave system is currently the deepest gap in Spain, and the sixth worldwide, excelling in its complexity and verticality. It is the union of three great chasms: Torca de Laureola (2.042m), Torca del Alba (1.975m) and Sima del Trave (1.917m).
[Picos de Europa]

La Torca de Urriellu is a large cave that has a great chasm 1.017 meters deep. A watercourse runs through it, called the River of Silence. This mountainous massif constitutes a monumental block of carboniferous limestone raised by the alpine tectonics, the action of the water on it has given rise to impressive gorges, chasms ...
[Picos de Europa]

· Deposit of Icnitas of the Central-Eastern Coast
Colunga, Ribadesella and Villaviciosa.

Every day that passes, more fossils and traces of a fertile colonization of dinosaurs appear. The coastal strip that stretches from Tazones (Villaviciosa) to Camangu (Ribadesella) is an escape from low cliffs where dinosaurs left their heavy footprint.
[Jurassic Coast Asturias]

The Toneyo Network is the largest Asturian cavity, with 19 km. of length of galleries and 614 meters of depth. Successions of wells and narrow meanders, a spectacle for lovers of risk.

The Jitu system is a complex underground system, with a development of about 8 km. At the biological level it is also interesting, a new genus and species of diplopod, Asturasoma fowleri, has been discovered.

On the central Asturian coast

Playa del Espartal is about 3 km long. It is a space of great scenic beauty, which constitutes the most extensive dune system in Asturias, and in it we find species such as the barrón, solandela, sea thistle, raspalengua, strawberry trees, laurels ...

· Island of the Deva and Playón de Bayas
Castrillón and Soto del Barco, council of Castrillón.

Playón de Bayas maintains another of the most representative dune sets in Asturias, and the island of Deva is the largest of the coastal islands of our region and an enclave for numerous birds.

· Carbayón de Lavandera
Tueya, parish of Lavandera, in the council of Gijón.

It is an oak that has come to acquire important dimensions, 20 meters high and its trunk almost 7 circumference. Today it is a symbol of the town where it is located.

Centennial carbayo forest (oak), which stands out as the most valuable for its size and age. There are also young specimens, and a significant concentration of birds: blackbirds, robins, great tit ...

· Pond of Zeluán and Ensenada de Llodero
In the municipality of Gozón.

The pond of Zeluán represents the last remains of the old marshes of the Avilés estuary, dried and filled for the installation of industries from the 50 decade. In the low tide, an inlet of mud is formed of about 12 hectares of enormous ecological diversity.

In the center of the region

It is a magnificent specimen of yew, of 16 meters of height and 6.5 meters of perimeter.
[The shuffle]

· Foces of the Pino River
Council of Aller.

El Tejo de Santibáñez de la Fuente, currently measuring 12 meters in height, 3.33 meters in circumference and 15 meters in diameter, may exceed 500 years of life given its size, although it is certainly not known.
[The shuffle]

The Xanas gorge is a singular geological formation, of great beauty and spectacularity, which has become one of the busiest and most emblematic routes in Asturias. Hazel trees, ash trees, linden trees, maples… they accompany us on the way. A spectacle of unparalleled beauty.
[Desfiladero de las Xanas]

The first one is a magnificent piece of yew of almost 7 perimeter meters and a height of 9 meters. The second, with more than 12 meters in height and 7 perimeter, is an example of rebollo (oak). They are two extraordinary natural monuments.
[The shuffle]

· Route of the Alba
Soto de Agues, council of Sobreescobio.

The Route of the Dawn, for its beauty and easy walking, without large differences in level, has become one of the most emblematic routes of the Redes Natural Park.
[Route of the Alba]

It is an extensive karstic complex consisting of a set of blind valleys and sinkholes, with an important underground development that originates large caves and chasms that act as sinks.
[Ports of Marabio]

It is the second Asturian cavity for its total development, 14.5 km, has a complex hydrological functioning, with an active channel that is continuation of the external channel of the Sampedro river.

In the West of Asturias

It is a specimen of yew, located next to a Romanesque church, and of a height of 8 meters, a circumference of 5.6 meters. Probably the longest yew in Asturias.
[The shuffle]

It is a specimen of yew 9 meters high and 5.6 meters perimeter.
[The shuffle]

Cork oak forest, located in the vicinity of the Sierra de Carondio. It is the best "sufreiros" forest in the Principality and is now recovering.

It is a wide and open beach, with extensive dunes. It has the presence of some communities and plant species exclusive of the dune and very rare formations in Asturias.
[Beach of Peñarronda]

It is the largest coastal peat bog known in Asturias, since its extension is close to the 27 hectares. Its flora is protected by regional legislation.

It is a karstic area, developed on marbles of the lower Cambrian belonging to the Vegadeo formation, which together give rise to a semi-closed valley whose waters flow into the Mazo river.

The beach has a length of 700 meters and at its eastern end is the mouth of a stream.
[Frejulfe Beach]

It is an oak, which although it is not very remarkable in terms of its height, if it is by the size of the trunk, which reaches the 10 meters in circumference. The antiquity of this tree is dated in the Asturian Encyclopedia as prior to the discovery of America.

It is a large specimen of beech, in a healthy state, it presents a perimeter trunk close to the 5 meters and a wide crown whose diameter exceeds the 30 meters.

The Esva runs in this space through a narrow gorge excavated in quartzite, whose walls reach the 400 meters of height difference.

It is a permanent waterfall located in a place of great beauty. Several hiking routes take into account this place.
[Oneta Waterfalls]

to 0,12 km The NH Oviedo Principado Hotel is located in one of the streets of the old town, in front of the historic University of Oviedo, an excellent location since we are 400 meters from the c ...

to 0,49 km The Room Mate Marcos is installed in a central area of ​​the capital of Oviedo, about 5 minutes walk from the Cathedral of Oviedo, the Fontán market or the Plaza del Ayuntamiento. Its deco ...

to 0,73 km The Eurostars Hotel de la Reconquista is an emblematic hotel of the city of Oviedo, it is not in vain that the winners of the Princess of Asturias Awards stay there annually, it occupies a building ...

Festivities of San Mateo in Oviedo

to 0,12 km The holidays are loaded with concerts, pilgrimages and festivals, children's games, humor, folklore, bullfighting fairs, fireworks, sports competitions ... Although the program ...

to 0,12 km It is worth coating a couple of steaks with ham and cheese inside it does not seem very original. But in Asturias they turn it into slow food, into pleasure, into something accredited and with its own stamp. ...

to 0,13 km Hundreds of candidatures come from five continents every year in Asturias. The growing prestige of these awards is perhaps due to the open and democratic procedure ...
See more things near here
Stainless steel work

The Biosphere Reserves are internationally recognized, although they remain under the sovereignty of their respective ...

The jesters of Llanes

These waterfalls are something different from the typical action of the sea breaking in big waves against the coast. In this c ...

The primitive Asturian communities in the cultural stage of the Eneolithic built great funerary monuments, the ...

The routes through Asturias can be classified according to very different criteria. There are thematic itineraries, simple passes ...