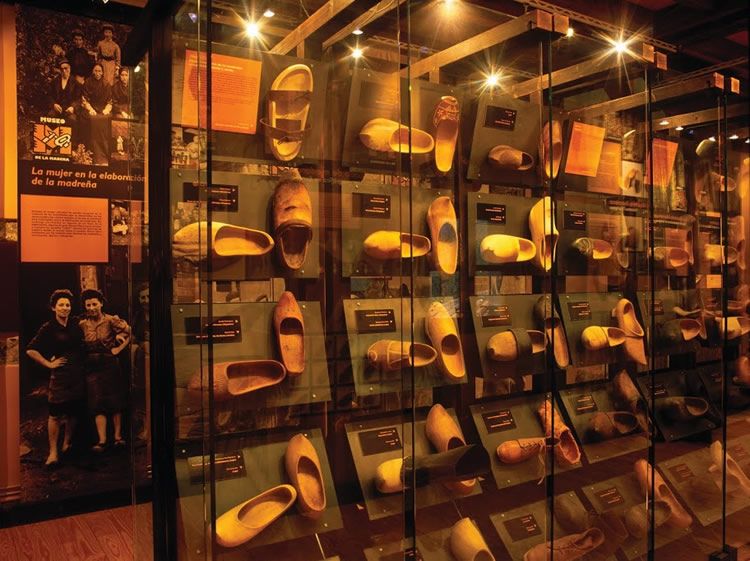 Case: a living museum of wood

Case: a living museum of wood

The Case Wood Museum combines the environmental relevance of this Natural Reserve of the Network Park, at the same time, Reserve of the Biosphere, with the no less relevant wood tradition, that far from undesirable forestry, has conscientiously respected its nature. The mountains continue as they did centuries ago and the presence of man is nothing superb. To better understand the merits of this council, you can approach the Park Interpretation Center, located in the capital Campo de Caso.

From there, and with the necessary knowledge, we left for the village of Veneros, Ethnographic Ensemble, with more than one Asturian identity sign, among which the Museum of Wood. It was promoted by a neighborhood association and currently has a well-stocked collection of the most basic woods of the park and the whole of the Principality. Like the one in ash tree, very abundant, or the oak, mythological tree already venerated by the ancient druids; Brown o the beech, the latter with a large extension throughout Asturias.

Approaching the Wood Museum provides us with more than one reward, such as learning to discern, from then on, which tree species we find along the way. Know also more precise aspects, such as a beech can reach 40 meters high and live 300 years. On the other hand we will discover the tools used in forestry work, as well as the most used tools in the area for carpentry and joinery, including the artisan manufacture of madreñas, of which Caso is a maximum exponent in the Principality. In times of splendor I had about a hundred artisans and a good number of indirect and parallel works to this performance.

To speak of «madreñes» is to speak of a culture, like the rural one, which in Asturias lived for decades with unpaved roads, and flooded caleyas that required indigenous footwear to solve the issue of walking without getting too muddy. The madreñes occupy a prominent place in the aforementioned Veneros Wood Museum. There are them of all kinds and conditions, as well as from all over the world, mainly from Cantabrian Spain and continental Europe. In the background they resemble Central European wooden clogs, but they gain height and adaptation to the environment, as they have a heel and two front cleats to improve insulation from moisture and mud. Basically there are two models, the narrowest and closed ones for feet embedded in «calcetos» (fat socks), or those that are made for feet that have previously been inserted in a shoe. On the other hand, some more or less sophisticated and aesthetic additions were discovered, such as moms with attached heels, removable, that the girls wore to attend parties and gain a few centimeters in height.

The mothers were the footwear of generations and rural generationsand the mother-makers, its creators, only began to be scarce with the appearance of other types of rubber footwear, waterproof and cheaper. In any case, many are those who continue to wear these clogs out of habit, and there are also many who, due to romanticism or nostalgia, even collect them in the most unexpected places of Asturias and the Peninsula.

Workshop of the Mother of Banners

And is that a mother is not anything. He knows it well Luis Testón Lozano, that to his 54 years is one of the people that still makes this art survive. In its Workshop of the Mother of the village of Pendones (a complementary center to the Museum of the Wood) we learn many more things of this noble work and we feel admired by the skill with which it is executed.

Luis tells us that the first generation of mothers and daughters of record is from 1770-1780, although he asserts, like many other connoisseurs of rural history, that this trade goes back many more decades, given its extreme functionality for the rural nuclei. The municipality of Caso is a reference point of what has now become a select crafts that is in danger of extinction.

Teston take the "hachu" and eye shape the trunk to shape the mother. Be part of a thin beech trunk, more excatamente the lower part of the tree to be harder. At the end of the process the pair is symmetrical and can be shod by an exact foot number 36, 37, 38, 42. Luis says that in this work "you have to be more careful than a heart surgeon". And it does not lack reason, because seeing as the splinters are falling of capricious form it is difficult to believe that there has not been an error of calculation that gives the fret with the work. The last phases of the elaboration are, if possible, more precious. From the hachu is passed to the adze, which allows greater control in fine work. The drill is then used to make the hole in the foot. On the outside it is finished polishing the clog with tools such as the Llegre, the scrape, the brush and a lot of pulse. Finally the madreña can be varnished or smoked with broom smoke, it is practiced slits with dexterity that in the end form a drawing of mainly floral motifs, and then rubbed with a piece of tocín (homemade bacon). Ready to show off without complexes.

Formerly Case supplied the Asturian market with some 50.000 pairs of mothers per year. Currently, this craft is almost a cult, and footwear itself, more than a market product, is now a relic of pure Asturian wood, very pleasant to the touch. If you have the chance, do not miss this magnificent opportunity to get to know this trade in situ, or what is the same: an interrelated culture and nature that have managed to remain faithful to themselves by supporting one another.

to 19,24 km Les Vegues tourist apartments are located in the village of Sames (Amieva), a few kms. from Cangas de Onís by the N-625, bathed by the waters of the Sella River. They consist of two ...

to 23,19 km Home cooking in a quiet and pleasant environment. We are surrounded by nature, a perfect place to disconnect from the daily routine and enjoy some simple and tasty dishes ...

to 23,49 km We are a small traditional and family dairy where the quality of the milk and the welfare of our animals comes first. Our dairy, created in 2010, is committed to the ...

to 0,75 km Asturian pastures are the raw material for its meat. The green landscape of this community is populated by cattle that are born, raised and fattened in a privileged setting. The...

to 1,44 km Biosphere Reserves are internationally recognized, although they remain under the sovereignty of their respective countries and are not covered or protected by any international treaty ...

to 1,47 km Its distinctive flavor is a conjunction of at least three factors: exclusive casina cow's milk, an autochthonous breed dedicated primarily to the production of meat, with a performance m ...
See more things near here
Stainless steel work

In the rural tourism accommodation in the area they will offer us practical advice on how to get to the locations ...