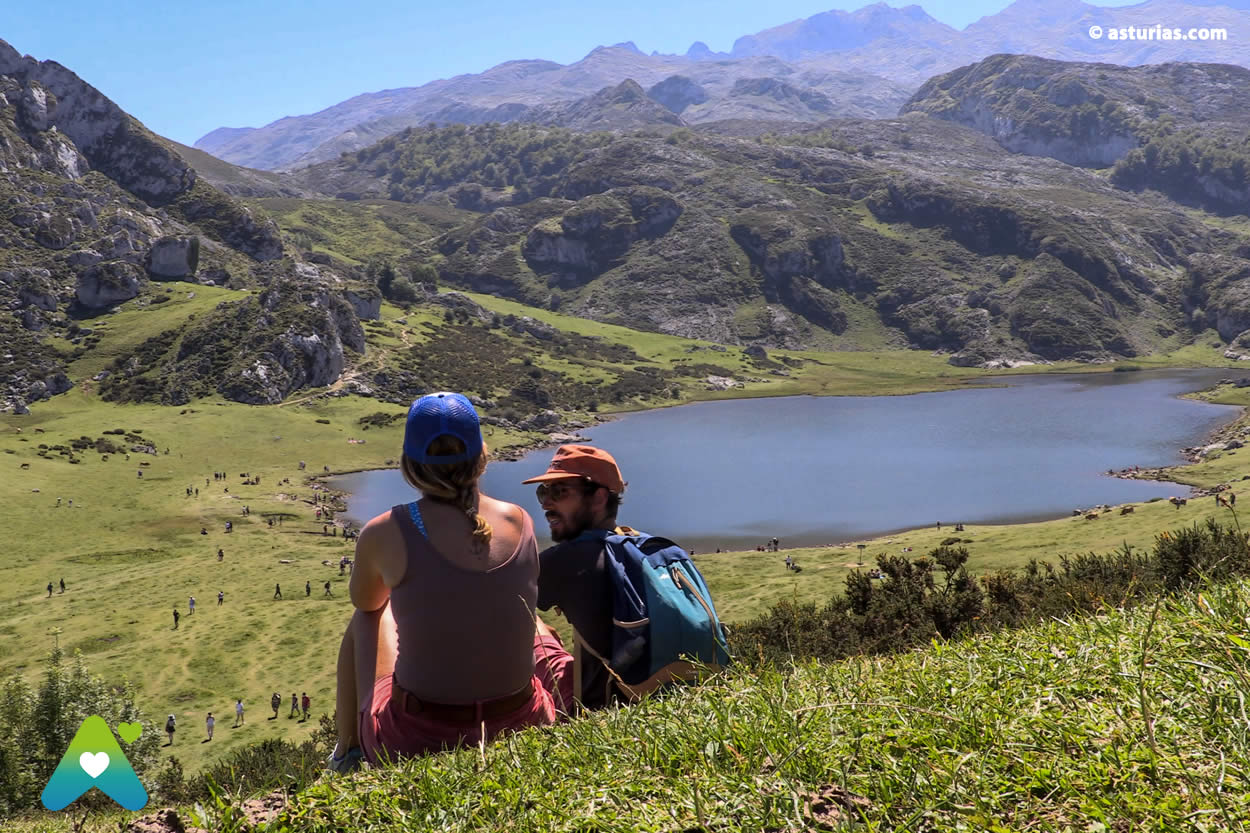 Enjoy them in spring without the crowds

Enjoy them in spring without the crowds

Climbing the Lagos de Covadonga has merit, especially if you do it by bicycle. They are 12 winding kilometers from the basilica that gives them their name. Kilometers enormously suggestive, with stretches for vertigo and slopes that want to be vertical. At 800 meters of altitude there is a 12 percent drop. A little further, 100 meters higher, we will stop the engine of our car (the bicycle is only for seasoned athletes) in the so-called Mirador de la Reina.

We feel like real monarchs for a while, wondering how we got so high, above the mists and low clouds, observing in detail the route of madness we have ascended. And so, sitting in one of the panoramic thrones of Asturias, we dream of being cyclists and winning one of the queen stages of La Vuelta a España.

Where are the Lakes of Covadonga located?

We have to travel to the municipality of Cangas de Onís, inside of the Picos de Europa National Park. In Covadonga the mountain road that takes us to them begins. From above on a clear day we see the seaAnd in between, and everywhere, in a vicious circle of peaks, we see mountains and more mountains, of all types and qualities, and with a dominant color: green. The Mirador de la Reina announces the arrival of the end of the stage: Los Lagos. But there is still a way, and in this stretch are the largest precipices. 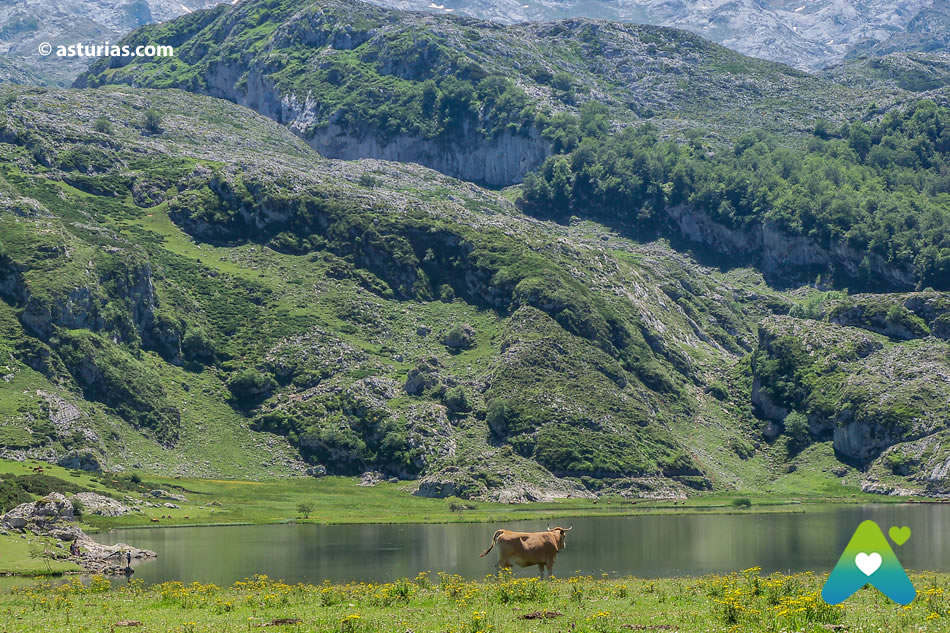 How many are the Lakes of Covadonga?

Actually there are three lakes of glacial origin, although most people think that there are only two: the Enol Lake and Ercina Lake. The LAug Bricial It is a smaller lake that can only be seen temporarily, perhaps for this reason it is less well known.

And that is more or less what we find at the top. We glimpse an infinite flock with a huge lake inserted in the landscape. The water makes the place more idyllic. It is the first lake, the Enol. It's down there, you just have to get carried away by the road. The lake is at an altitude of 1070 meters and is of glacial origin, like the Lake and the Ercina basin. The waters of the Enol reach twenty three meters deep in the southern zone. For a few months the snow accumulates all around. Cold water is its essence. It comes from the ancient ice that covered the place, much earlier in time. He was directly in charge of excavating this deep basin between the Mosquital peak (1.268 m.), The Enol truncheon (1.274 m.) And the Sahornín hill (1.183 m.). A glacier that descended from the mythical summit of Peña Santa at the beginning of the Quaternary -though according to the legend the lake was formed by the tears of a woman-. As a curiosity, the Enol is home to an important population of crayfish. There is not much effort to see them, the serenity of the waters is not a good hiding place. The mountains that can not be seen are cloned now in their own reflection, and with a clear day, everything becomes doubly blue and green. In the middle, splashing the view, some solar flare that seems to come out of the cliffs.

We continue on the way Ercina, a little higher, two kilometers away. We climbed up to 1108 meters of altitude. The lake, smaller than the first, is less puddled and the mountains come into view more directly. The water gives way to the peaks of the Cornión. Aquatic vegetation grows on its banks that feeds an entire bird community, with species such as the coot, bluebirds and teals. Its depth does not exceed two meters.

In the vicinity of the Lakes of Covadonga you can see skies with abundant birds, especially corvids and raptors. It is also difficult to see eagles and Egyptian vultures.

Routes from the Lakes of Covadonga

Many lakes can be started from the lakes routes through the Picos de Europa, approach the forests of ash and beech, meadows, flocks. Or, for the more adventurous, routes that go to any of the nearby refuges, to be able to start excursions to the high mountain from there. Among the paths to highlight are those that lead to Vega Redonda and the Ordiales Viewpoint from Lake Enol, and of Vega de Ario from the Ercina. We can also climb affordable peaks in the central massif of the Picos de Europa, such as the famous Jultayu, from which we can distinguish the tiny path of the Cares route well below our position.

Finally, to say that Los Lagos keep the secret and the silent life of the shepherds but also their manifestations of joy. In summer, on July 25, are the scene of the Pastor's Feast, festive emblem of this community of the Arcadia that we hoped to find. From these lands and their culture we will doubly enjoy that day. If the sun shines, better than better.

Shepherding is an immemorial profession, as old as pastures and shepherds - used to looking after their interests ...

Sleep in the Picos de Europa

The area has a multitude of hotels, apartments, rural houses, hostels ... a wide variety of establishments to sleep in the area and enjoy this unique environment. In our link we offer offers and direct contact with the owners, without intermediaries or commissions.

The best rural houses, apartments and hotels in Cangas de Onís. Offers to enjoy in a unique environment. Accommodations of…

Before going up it is good to look at the weather conditions in the area. We are in a mountain area with a certain altitude and we can be surprised by the fog, the rain, even a storm.

If we are ready to do some route in the vicinity, it is advisable to bring a raincoat, warm clothes and comfortable shoes, preferably mountain boots; food and water.

to 0,08 km The Los Lagos-Ostón-Poncebos route, this may be the fastest way to summarize a mountain route in which we will spend practically the whole day, ...

The forest of Pome

to 0,14 km The Pome forest is a microcosm that reflects one hundred percent the environment of the Atlantic forest due to the beauty of the tones, its leafiness between ...

Vega de Ario and the Jultayu

to 0,18 km We are talking here about the route that runs between the Lakes of Covadonga, at an altitude of 1100 meters, and Vega de Ario, at 1600 meters, which takes a late round trip ...

to 0,31 km The Fiesta del Pastor, held every year at the end of July in the Vega de Enol, is one of the most emblematic encounters of a whole way of life ...

to 4,91 km It takes its name from the homonymous places, one in the council of Onís and another in Cangas de Onís. The first of the councils is that the most renowned...

to 6,42 km Covadonga also has a lot of historical height. One of its most legendary heights is an unparalleled feat, a historical reference of the first magnitude of the Es ...