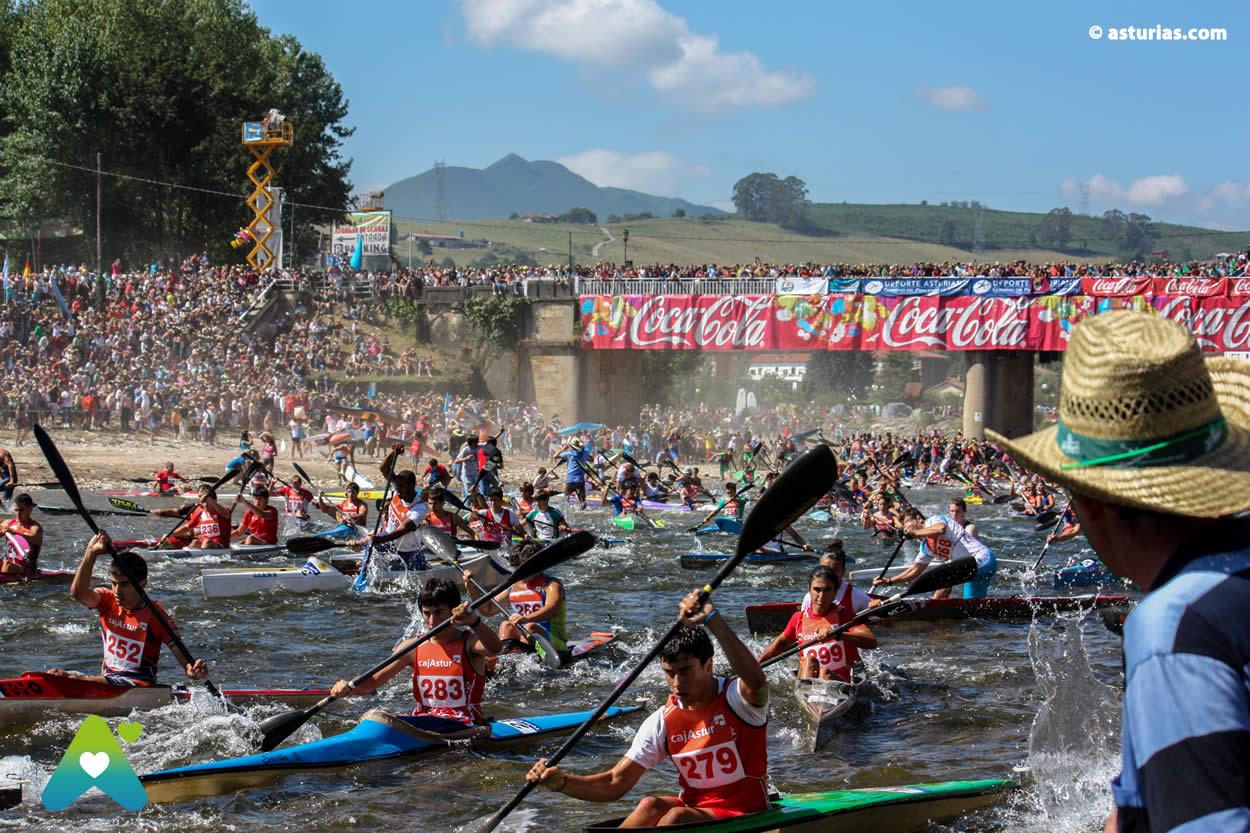 The most sporting party

The most sporting party

Few sporting events have a big party at the same time. The International Descent of the Sella, is an unusual test in which both professionals and amateurs, athletes and the public measure their strength. It is a Folkloric-sporting festival, declared of International Tourist Interest, the most important of the Asturian summer, without a doubt, due to its spectacle and public affluence.
This year 2022 will be on August 6

In the first video above you can see the great atmosphere at Sella 2022, after two years of suspension due to the pandemic. With a lot of revelry, a massive parade in Arriondas and a great canoe and canoe race.

If you want to enjoy the same experience as professional paddlers You can do the descent of the Sella with one of the active tourism companies in the area. We give you all the info.

The sports party of Las Pirguas

It all started at 1929 with a canoe trip Dionisio de la Huerta and a friend of his by the river Piloña, affluent of the Sella. In the summer of 1930, with one more companion they went down the Sella from Arriondas to Ribadesella without competitive pretensions, rather contemplative and pleasant. The tour went on repeating year after year, and the first places began to compete, to improve the brands and to be cheered by their friends from the road. Dionisio did not want to compete, but to pay tribute to the river, and thanks to his position that did not become a simple career.

More than fifty years after the origins of the competition, and after the test was consolidated at all levels, a couple of Australians J. Jacoby-Ramon Andersson. as 1988, they left an indelible mark, a record that was on track to be unbeaten: one hour, six minutes and thirty-six seconds in completing the 17 kilometers that separate Arriondas de Ribadesella (the most powerful section of an extraordinarily beautiful river, with a natural course of sixty kilometers of splendid nature). But in the year 2009 Julio Martínez ratified his reign with his eleventh win in K-2, along with the Asturian paddler Miguel Fernández Castañón, establishing a new record of the test with a time of 1 hour, 1 minute and 14 seconds.

The Sella he persists unconsciously in the collective celebration, and in full popular merriment he often forgets that he is the main protagonist of the event. It is born in the Majada de Pozúa, in the Valley of Sajambre, in the Picos de Europa, and runs through the council of Cangas de Onís, Arriondas and Ribadesella, where it ends up for all purposes, with canoes and human mass included.

Party that accompanies the river begins in the early hours of the morning, when they leave for Arriondas the fluvial trains from Ribadesella and Oviedo crowded with people to see the exit. At eleven o'clock, the streets of this town begin one of the most attractive moments of the day, a multitudinous procession and touching the carnival of selleros with a thousand beads, walking or on board all kinds of rolling contraptions that pretend to follow the race to Ribadesella. the general highway parallel to the river.

Shortly before midday, the canoeists wait impatiently. After the ritual verses "Keep the audience silent, and listen to our word ..." that Dionisio de la Huerta read until his death in 1995; at twelve o'clock the departure is ordered.

The environment is electrified instantly, while at the same time more than a thousand canoes are thrown together to the river. From then on everything happens, many paddlers go to the water in their precipitation, canoes and oars are broken. Some are trapped in their bad fortune and a few are put in the lead, leaving graceful of a cardiac starting gun. The Sella, halfway, is usually two boats, three, four, five or six, never more. Many have been left behind, and now favorites or lucky are suddenly fighting each other, against their own strength and fortune. When someone starts to get a few meters ahead there is little to do unless misfortune comes in their way. Numerous Seals have been disputed until the last meters, under the same goal bridge of Ribadesella, and Sellas have been won by just a hand's breadth.

The Sella of year 2004 It will go down in history because the K2 formed by Julio Martínez (11 times Sella champion) and Emilio Merchán, defeated their opponents running along a section of the river, Boticaria Island, a few meters from the finish line, opening up new sporting possibilities. to the test

In recent years, Walter Bouzán takes over from Julio Martínez winning 9 Sellas, 7 of them in K2 and consecutively next to his partner Álvaro Fiuza.

In the female category, the absolute record is held by the Palencia Mara SantosWho has won the descent in twenty-two editions.

At the finish line always awaits with anticipation. The public address system warns that the English or South Africans are coming, or that there is a close fight between the Portuguese and the Asturians ...

When everything concludes, following also the tradition inaugurated by Dionisio and by the pioneers of the Sella, the canoeists and the pilgrims move en masse by train or road until the Fields of Ova, three kilometers from the Villa Riosellana, where there is a multitudinous picnic, they take a nap under the poplars, they watch the folkloric groups, they dance a little and they give the trophies to the champions of all the categories.

But there's still another Sella in this chameleon party, the Sella that overflows Friday and Saturday night in Ribadesella and Arriondas, and that every year beats, like the sports event, all the predictions in number and delivery.

The party of the pirogues

The nocturnal Sella It is a very tough race, in which more than 100.000 «dancers» try to synchronize their effort to be able to arrive the next day without having stopped dancing for a single moment.

The two villages are flooded with lives, like Cantabrian venias, full of human channels through which the passions circulate. The athletes of the night form human whirlpools in the vicinity of the urban area, and many, to most, seems not to pass bill hours and hours of pursuit sellero.

As the night progresses, by contagion, they go through moments of collective pájara, but there are the «Disc jockeys» in his work as helmsmen, so that the great ship follows the course of its own enthusiasm: «Pray, Pray!». Downstream, until dawn. The Night Sella is a giant galley, floating in an immense outdoor setting, in it the muscles and vitality are tested. And in the great disco, mixed with its audience, you can see all kinds of sculptural Palistas of both sexes.

Someone once said that the social essence of "sellism" is a kind of unique atmosphere, difficult to describe because it is all in the epic atmosphere that is lived. You get to feel that anything can happen; it is the principle of entropy, a spiral of emotions where you can meet number of people for any reason and without conventional excuses.

to 0,04 km The town of Ribadesella is the capital of a municipality surrounded by mountains, beaches and cliffs. Without going any further, in the urban area they condense a lot ...

to 0,05 km The El Puerto restaurant has been renovated, since 2016 enjoy this new place in the town of Ribadesella. We wait for you all! Speciality on ...

to 0,06 km The Carroceu Sidrería is located next to the Ribadesella pier, overlooking the beach. On our terrace you can taste good cider and good dishes ...

to 0,06 km Montañas del Norte is an Active Tourism company dedicated to providing its clients with attractive experiences with a high degree of adventure against ...

to 0,07 km Ribadesella has become one of those gluten-free destinations, which allows you to spend a vacation without setbacks. Ribadesella celiacs is a project ...

to 0,07 km We offer you a different way of getting to know the Asturian coast: sailing on jet skis. Ribadesella Aventura offers jet ski rental ...