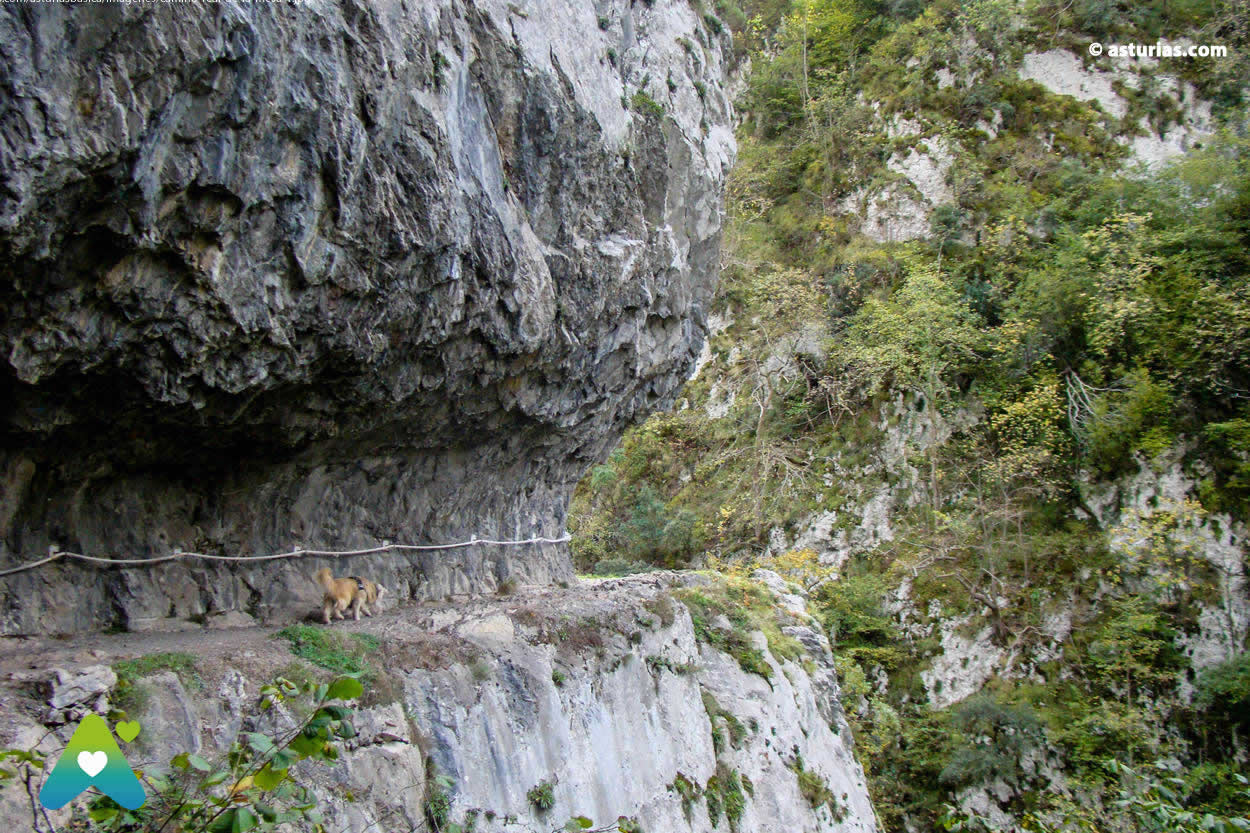 In search of the xanas

In search of the xanas

Xanas Gorge is considered as the "mini Cares". A route of much smaller route than the queen path of the Asturian landscape but that matches its proportions in beauty and spectacularity.
This little brother of the famous Garganta del Cares is for many hikers an even more beautiful route, away from the overcrowding of the former, with a richer variety of ecosystems and also more suitable for all ages; regardless of the physical condition of the hiker.

To do the route of the Xanas we have to have between two and three hoursThey will be enough for us to cross this natural gorge and turn around to our starting point.

We will cross slowly the gorge, crossing abrupt zones of a footpath that in some points is drawn to more than 80 meters on the river Viescas or of the Xanas. On the way, dominated by a rocky and encased profile, we will encounter tunnels, bridges and natural springs. The second part of our tour will be through a forest of great foliage.

The path carved in the rock was built in the fifties with the intention of communicating towns belonging to three municipalities: Santo Adriano, Quirós and Proaza; but the works never came to an end, staying until the date as a path that comes as a thousand wonders for the interests of the hiker.

How many kilometers is the Xanas Gorge?

Shipping is about 7,6 km in total. The gorge itself constitutes a narrow two kilometers in length, with spectacular vertical drops of almost five hundred meters, which are the result of the patient excavation of the mountain by the Viescas river on its descent to merge with the Trubia.

The name of the gorge honors mythology. La Xana is the Asturian fairy par excellence. Live forever in the caves of the rivers and in the fountains. A character that could not have better personification than a route like this one, in which water is the mistress and mistress of nature.

The ancestral influence of this landscape is even greater in some stretches of the river itself that are very appropriate to practice the canyoning. After an hour of walking from the beginning of the trail, we can deviate if we have time and descend to the stream, put on wetsuits and start a different adventure: three or four hours to live at the top of rappels, slides and jumps. printing water.

Where is the Xanas Gorge?

We have to get closer to Villanueva, capital of the council of Santo Adriano. We can do it by the N-634 road from Oviedo, towards Grado, or by the A-66 motorway from Oviedo. Through both the National and the Highway we arrive at Trubia. There we connect with the AS-228 that takes us to Villanueva.

Shortly before this town, on our left, there is a recreational area where we can leave the car. Here there is clear signage of the trailhead: PR-AS 187. Shortly after starting we cross a pedrero; behind us we leave the Proaza valley and the mountains that separate Teverga from Quirós. We continue ascending and enter the gorge. we cross several tunnels in the steepest part of the road. Shortly after, we go through a beech forest to cross the Viescas River on a wooden bridge. After a slight climb up a steep meadow, we arrive at the village of Pedroveya, the end of our journey where, among other things, we can admire a century-old yew tree.

The return we will do it for the same itinerary.

to 1,29 km Eleven bridges have been rehabilitated here that cross the Trubia, Picarós, Teverga and Llanuces rivers. Thanks to them we went from shore to shore. Also through ...

to 4,99 km The itinerary around the Alfilorios begins in the village of La Carrera (400 m.), A place that we reach through the MO-5 road proce ...

to 5,00 km Throughout Spain, there are more than 2.000 kilometers of disused railway infrastructures that have been converted into cycling routes and sen ...

to 5,08 km The Balneario Real Spa has architectural elements from the 8th, XNUMXth, XNUMXth and XNUMXst centuries, it is located XNUMX km from the center of Oviedo, in the beautiful v...

to 5,49 km As its name suggests, the town of Las Caldas, just 9 kilometers from the Asturian capital, is a fully-fledged thermal town. United since ...

to 5,61 km It is a visitor reception center, tourist information point and has a small souvenir shop. The exhibition area has been renovated ...

Teverga, what to see and do