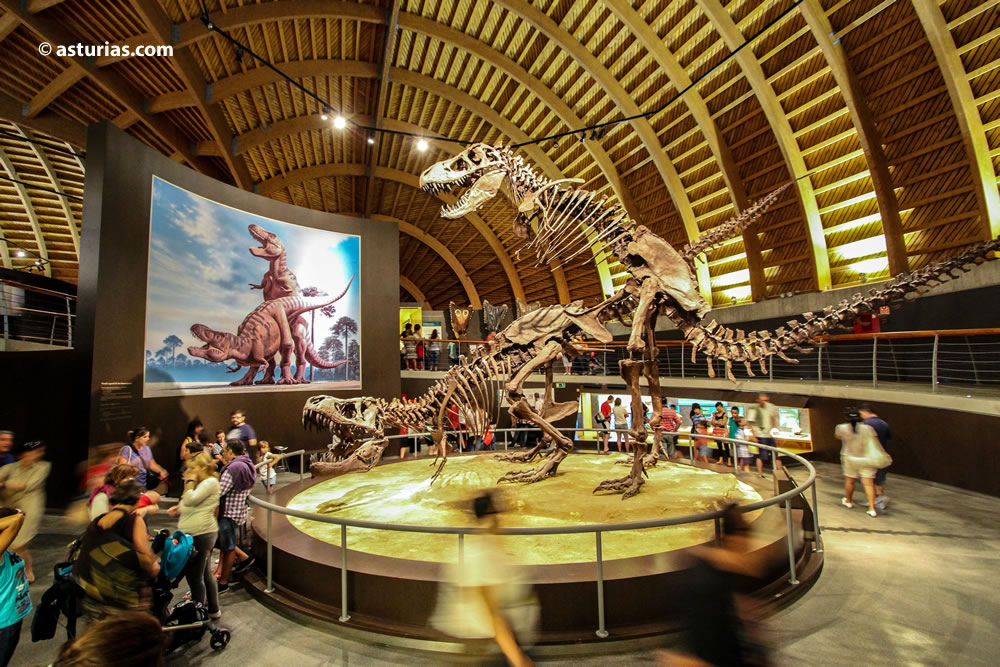 A cultural walk and for "all audiences"

A cultural walk and for "all audiences"

An extensive inventory of facilities that ranges from Paleolithic to avant-garde art, from children's museums, to ethnographic or industrial ones, as well as theaters, craft centers and a good number of archaeological sites. Here we bring you a list of some of our favorites.

We know that Asturias is known mainly for its spectacular nature and its rich gastronomy, but that does not mean that the region also offers a wide variety of museums, cultural centers and interpretation centers that you should not miss on your visit to Asturias.

In a privileged place on the coast of Asturias a few meters above sea level, is located the Museum of the Jurassic of Asturias (MUJA), a unique museum that, in the form of a large dinosaur footprint, hosts one of the most complete and educational exhibitions in the world on these extraordinary reptiles.
The MUJA shows life from its beginnings to the appearance of the human being and offers extensive information on the different aspects of the life of dinosaurs, through the tracks that are preserved today on the Asturian coast that go from Gijón to Ribadesella.

In a privileged place on the coast of Asturias a few meters above sea level, the ...

Talking about mining is, therefore, talking about Asturias. For more than two centuries the Principality has contributed between 50 and 70% of all national coal production. In this industrial context, so relevant for all Asturian society, it is where the cultural importance of a Museum such as the MUMI (Museum of Mining and Industry) should be located, built in El Entrego (San Martín del Rey Aurelio) in 1994 and which has become the quintessential museum of the Principality, being the most visited in all Asturias, with exceptional facilities and content and currently complemented by the Museo de la Siderurgia (MUSI), in La Felguera, Langreo.

The wealth of the Asturian subsoil has determined the development, social conflicts, the economy and the political tendencies of all ...

3 · Cabrales Cheese Exhibition Cave - "Journey to the center of Cabrales"

Who has not heard of the famous Cabrales cheese? Undoubtedly, one of the great symbols of Asturian gastronomy, so much so that it deserved a tribute in the form of a living museum and ethnographic didactics. The cave exhibition located in the council of Cabrales, in eastern Asturias, is a long journey through the uses and customs of an entire community, and one of its inimitable cheese-making hobbies. A hobby, at the same time the foundation of an entire local economy, which is marvelously represented in a natural cave, with the colorful wrapping of the sociology of Cabral.

One of the visits that cannot be overlooked is the Cabrales Exhibition Cave. A long journey ...

A World Heritage Site since 2008, the Tito Bustillo cave is one of the great sanctuaries of the Palaeolithic art of Europe. Its potential equals, at least, the three most important foci in the world: the La Garma and El Castillo complexes in Cantabria, and Les Eyzies in France.
In Tito Bustillo you will find the so-called Galería de los Caballos, the Lloseta cave and the unique Camarín de las Vulvas, a space where the prehistoric people signified the fecundity of women, and one of the few female sexual samples of rock art known to the academics.

The Tito Bustillo cave is one of the great sanctuaries of Palaeolithic art in Europe. Be part of a ...

5. Museum of Fine Arts of Asturias

The Museum, inaugurated in May 1980, is located in two buildings in the old quarter of Oviedo: the sumptuous Palacio de Velarde, from the 8th century, and the Casa de Oviedo-Portal, from the 10.000th century. The Museum currently has a collection of between 350 and 400 pieces, although only between XNUMX-XNUMX are actually exhibited to the public. It contains paintings by Spanish artists - notably Asturians - and foreigners (highlighting Italian and Flemish painting), as well as sculptures, photographs, and glass and earthenware objects..

The Museum, inaugurated in May 1980, is installed in three buildings in the old quarter of Oviedo: the Palace ...