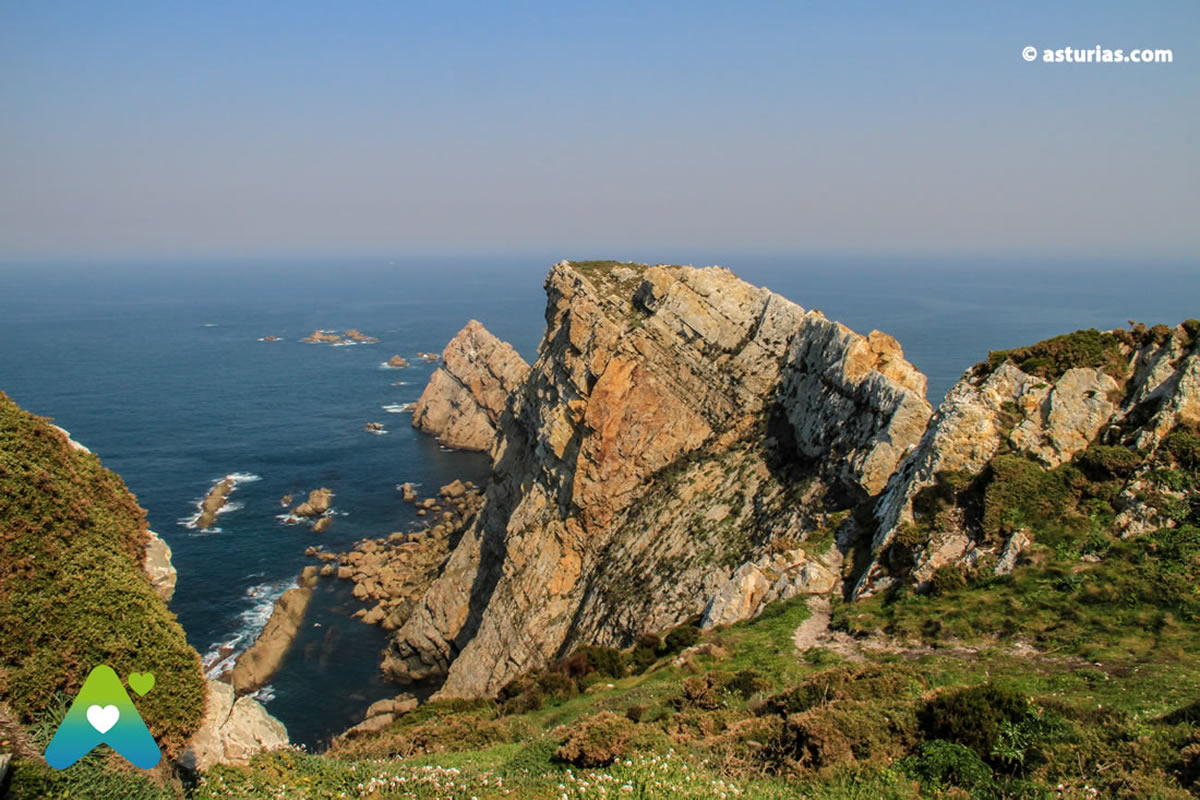 Any place on Earth is determined by two numbers, their latitude and their longitude. The numbers of Cabo Peñas They are these: 43º 39.4 ′ North; 5º 50.8 ′ West. Cold coordinates that, however, already indicate one thing to take into account: we are in the northernmost point of Asturias. Further north impossible. What the numbers do not delimit is the vertigo and the abyss that summons one of the most impressive capes of the Spanish geography. Everyone looks out, some even recklessly, but it is not for less, the occasion cannot be missed. Since 2014 it has been part of the European Natura 2000 Network.

They are more than 100 meters above sea level, an exceptional experience on a cliff so sharp that it looks like the prow of a giant ocean liner. The cruise to which Cabo Peñas invites us is not anything, the winds whip, the sea brings us with all its rage, and over our heads the seagulls fly. The swell breaks in half against the prow of our imaginary ship, which is actually a protruding and powerful shell of the same earth. The sea is split against the figurehead; a quartzite, abstract and geometric figure. Mysterious too.

Our hair is ruffled at Cabo Peñas, we breathe deeply, we dare to look towards the beyond, in this case at the bottom, where the white foam is radiant and vivacious. The islets appear for help.

In our particular meridian we can sit down to imagine. Suppose it is midday and moves to the west, or to the east. Suppose you can travel instantly wherever you want. Keeping a steady rhythm, 180º will later reach midnight. When you have traveled 360º you will return to where you were, the time will be midday again, yesterday at noon. Today or tomorrow. Time does not stop but it stops while navigating on the «Boat Peñas». That pike or tiny triangle that we see appearing on the map of Asturias turns out to be a monument to the sea, of overwhelming dimensions.

Geographically, Cabo Peñas is located in the central area of ​​the Asturian coast, between Gijón and Avilés, in the municipality of Gozón. The real surface of this projection, seen from satellite, is 19,2 km2 and contains a whole series of fully natural watertight compartments; to the point of being a protected space, mainly at the biological level by its importance as a habitat for seabirds and other migratory species. They are here too all varieties of heather existing in the region, as well as relevant geological formations. Towards the interior, to port side, the relief is very shallow, with small river valleys that have allowed this flat peninsula not to have been consumed or cornered by terrestrial water. In this way it also maintains its own height and personality compared to the Cantabrian Sea. The surrounding landscape is reached with a glance, and on a clear day you can see the constant folds of the central coast of Asturias to frankly distant locations. From the cross and mailbox of peaks, on top of The Gaviera (94 ms.), the northernmost peak of the entire cape, we can glimpse Cape Vidio and even Cape Busto to the west (100 km away, in the municipality of Luarca); and to the east, Punta del Castro, Punta de la Narvata, Punta el Paguión, Punta la Vaca, reaching the point of view as far as Punta Tazones (about 60 km away, in Villaviciosa).

The own Space of the Cabo Peñas collects mainly cliffs and beaches with valuable dune systems, emphasizing from west to east: the Xagó sandbank, the Portezuelos beach, the Verdicio beach, the Ferrero beach, the Llumeres beach or the Bañugues beach. It is also included the islet of La Erbosa, the largest on the Asturian coast after the Island of Deva.

The corporal is crowned by the Lighthouse of Peñas, the most important and most far-reaching of the Asturian coastline. Gives light since 1852 and is a basic guide to northern sailors. In good weather the light beam reaches 41 miles, with mist the not disdainful 18 miles. Before 1852, it was signaled with fire, burning logs on a stone screen that lit up the night in Peñas and indicated the way home for sailors. Going back in time and imagining such primitive signaling allows us to imagine really cruel navigation, hard in practically all conditions. What wouldn't sailors think when suddenly seeing up close the bulk of this cape that already completely overwhelms us? And that we are on it, with our feet on the ground and without suffering the swells.

Our boat does not move, We're safe.

In the council of Gozón we can choose to approach the Cabo on foot thanks to The Senda del Cabo Peñas (PR-AS-25), well signposted, that runs through this coastal rasa, very close to the edge of the sea. Traveling through the West of Peñas the parishes of: Laviana, Podes, Verdicio and Viodo. By the East of Peñas: Bañugues, Heres and Luanco.

to 1,82 km Restored 120 m2 stone house located on the cliffs of Cabo Peñas (protected landscape of Cabo Peñas), overlooking the sea, with capacity for ...

to 2,41 km Casa Roces is a rural accommodation that is located in Bañugues, very close to Luanco, in the place of Cabo de Peñas in Asturias - Protected Landscape ...

to 3,88 km The ideal beach to go with children is the one that has easy access, that is clean, with abundant fine sand, quiet, without currents or waves ...

to 4,03 km In these times of wild urbanism, the Gozón council has the privilege of having a protected, green and immaculate coastline, where ...

Candás, tourism in a fishing village