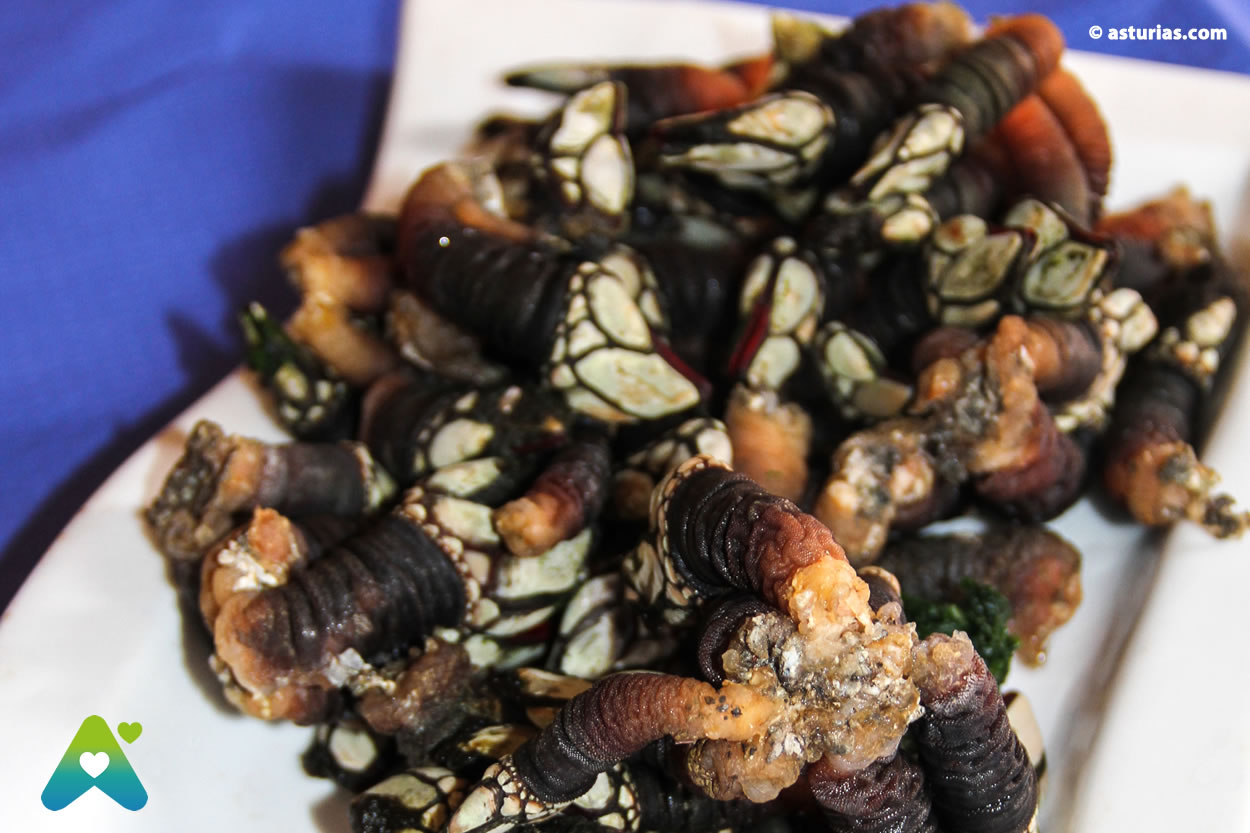 If we talk about Pollicipes cornucopia few people will understand. It is better to say, simply, barnacle. This is a universal term, or almost, and refers to a crustacean that develops in the rocks beaten by the sea. From the cliffs he passes to the table not without effort in the capture, and everyone talks wonders about him once he has sucked. The taste of the barnacle, and the good taste it leaves, is also an almost universal quality that nobody doubts.

Eating barnacles is like eating the essence of the sea. The properties of temperature, salinity and density of the water in which it grows, as well as its richness in nutrients, influence its good growth and round off a very healthy flavor. They are rich in minerals and low in fat (just an 2%), they contain between the 5-20% proteins. To ingest them you have to be careful because they splash, therefore, the barnacles must be carefully opened between the nail and the peduncle, the edible part, which can reach five centimeters of "chicha".

The best barnacles are those that have a given size, somewhat thick and neither long nor short. They are called "sun" barnacles. The shadow ones, which grow on the rocks under the sea, are longer and less appreciated. About six months it takes the stretch. In origin they are a larva drifting in the sea. At one point he chooses the rock that will be his habitat and, with his "cement gland", produces a liquid that fixes it to the rock. For its good development it needs, in addition to clean and beaten sea, ample periods of sun. Fresh rainwater stimulates its growth. It is easily understood for these reasons that Asturias presents excellent conditions for them to grow clean and healthy.

The difficulty to get to where they are, and the extraction in full waves in which many play the type justify their high price. It is a task that technically has the same weapons as in the past, especially for the so-called "foot barbers", which, unlike those that approach the coast by boat, have to walk in balance on the high coast and lower at the foot of them, following the natural footprints that the sea and wind have opened on the rock. Without the slightest sensation of vertigo, they wait for the low tide and they slide by the ropes until the llancar, the area where the sea beats, a space that can reach three meters in length and where marine flora and barnacles pineapples abound. Armed with a pair of sacks, a barnacle, tool to extract the precious seafood, a rope of about 50 meters and a wetsuit, the barnacles begin their journey through «the caleyas» near the abysses of the coast, searching, from the height, an ideal llancar. They are then dropped to the bottom of the limestone blocks. They swim, dive, pass from one islet to another with the rope in tow to tie the sack and not lose their catch.

In llancares there are pineapples born during the spring and autumn, which reach their biological maturity throughout the year. Once down, with the percerbera, classic tool that consists of wooden handle and leaf finished in metallic wedge, the hollows where the barnacles are encrusted are stirred. At the whim of the waves, and surrounded by the sharp edges of mussels and rocks, professionals perform their activity.

The preparation of barnacles is very simple, and nothing has to do with how expensive it has been to catch them. They should not be washed, and if done, lightly and quickly. They should be cooked with seawater if possible. If it is not, a handful of coarse salt will be added. They should not be cooked too piled up or with a lot of water. When the water breaks to boil, the barnacles are added. As soon as it boils again, we leave them for five minutes, take them out for a dish and cover them with a cloth. They must be consumed hot or tempered. In Asturias they ask for tapas and accompanied, of course, a few bottles of cider.

In almost all the Asturian geography we will be able to taste them. Above all, as is obvious, in the coastal municipalities. Traditionally it was not a good so appreciated for being scarce. Its value was the taste, the quantities were different and the barnacles were abundant in the community. Vestiges of these popular meetings continue today in the so-called gastronomic festivals. The barnacle is the protagonist of them in several coastal locations, but perhaps Tapia de Casariego the one that lately takes the palm. He has managed to organize a barbering event like few others, with diners coming from all over the Principality to taste hundreds of kilograms of this precious mollusk.

to 0,20 km The municipality of Tapia de Casariego is located on the western Asturian coast, in the northeast of the Iberian Peninsula. It has a total area of ​​...

to 0,34 km This natural saltwater pool is known as the Antonio Alonso Bedia “Toño del Moderno” pool and was inaugurated in 2010. Its saltwater is a...

to 0,49 km Tapia has a lot of coastline, cliffs follow good beaches; calm waters that invite you to swim and waves rough enough for surfing. You...

to 1,74 km It is a complex formed by a large patio bordered by the house-dwelling, an old wood oven to bake bread, a drying rack, an outbuilding and the well ...

to 4,78 km Peñarronda beach, on the limits of the Castropol and Tapia councils, is a vast area, thoroughly prepared by nature so that ...

to 4,82 km Mexota beach, although not officially a nudist beach, has been a meeting point for lovers of this way of enjoying nature ...

The seafood of the Bay of Biscay