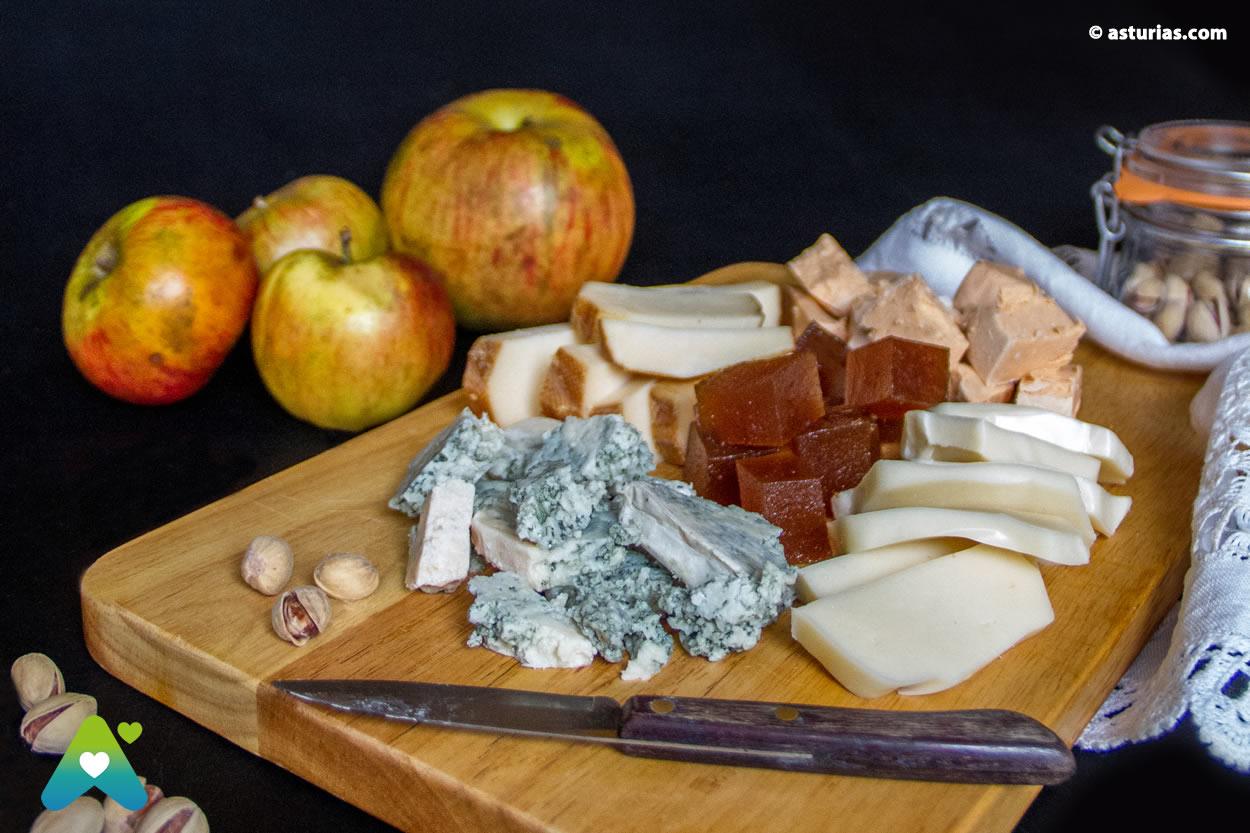 Of the 42 varieties of cheeses that Asturias has, it is difficult to choose only 10. We make a list of the best known outside our borders and the ones we like the most ...

You can buy extra quality Asturian cheeses in our online store:

The climatology and orography of the region offer some very favorable conditions for the production of high quality pastures, ensure the feeding of dairy cattle naturally most of the year. The characteristics of the pastures, species and breeds of livestock and production traditions typical of different areas of the region have given rise to the different types of traditional Asturian cheeses. Five of them have European protection seals: Cabrales, Gamonéu, Casín and Afuega'l Pitu cheeses enjoy Protected Designation of OriginWhile Los Beyos cheese is protected with the Protected Geographical Indication seal.

How many varieties of cheese are there in Asturias?

There are 42 varieties of cheeses that are made in Asturias, so we can say that it is one of the regions of Europe that produces the most types of cheese. They are a hundred artisan producers.
Of all of them we are going to choose 10 to let you know a small part.

The most famous of the cheeses of our land. From strong smell and powerful flavor, semi-hard, buttery and with intense aftertaste on the palate.
About Cabrales cheese there is little to discover at this point, everything has been said ...
It is made from raw cow's milk throughout the year and during the months of June and July it is mixed with milk from sheep and goat.
Mature cheese in caves from two to five months, in them there is a relative humidity of 90% and a temperature of between 8º and 12º C, indispensable requisites to get a good cheese.
Cabrales Cheese

Three milk cheese, made in the heart of the Picos de Europa National Park. Like the Cabrales matures in natural caves and is indebted to a transhumant pastoral culture, which in spring and summer seeks high mountain pastures for your cows, sheep and goats. After two months in the cave the bark becomes slightly smoked, it is covered in a Musty veil of reddish, gray and greenish tones. The pasta becomes dry and brittle, with a slightly spicy and developed flavor.Gamonéu cheese

It is made with Friesian cow pasteurized milk and its production area covers the central-western area of ​​Asturias, in 13 municipalities.
It is named in Asturian and does not support an exact translation nor a clear etymology, it would literally mean "to drown the chicken", according to some it alludes to the peculiarity it has of sticking to the palate and pharynx (pitu in colloquial Asturian) during its tasting.
It's a cheese creamy, unctuous and tough, tending to acid, with a very particular aroma, like a lot or nothing. It has a grainy texture and white-yellowish or orange bark if paprika is used in its preparation. Afuega'l Pitu Cheese

4 Cheese of the Beyos IGP

Cow and sheep milk or cow's milk only, cylindrical molds of small size and two or three weeks of maturation. It is the essence of this little cheese.
It is made in the councils of Ponga and Amieva in a totally handmade way. This exquisite work of art does not usually exceed 15 centimeters in diameter and its weight ranges between a quarter and a half kilo.
With its texture adapts to all occasions: as an appetizer, in salads, in a kitchen for cachopos or sauces and for dessert with a bit of quince jam it is an 10. Cheese of the Beyos

By its name we already discovered its cradle, the municipality of Taramundi, in the western end of the Principality of Asturias. Rich pasture area and artisanal knowledge.

We can taste three varieties: the walnut and hazelnut, the matured goat and cow (at 50% of both milk) and the pure goat. The first of them is perhaps the most demanded, it is the only one in Spain that contains dried fruit and certainly inimitable flavor. All three have the same milk essence, the same know-how and a unmistakable, long and buttery taste.
Super cheese to melt and gratinate, will pleasantly surprise you. Consume it only with cider, white wines or Ribeiros. Cheese from Taramundi

It is elaborated in the case council, inside the Redes Natural Park.
Its unique taste is due to three factors: the Exclusive cow milk casina, a high-fat milk. The second factor is the rennet used, from dried stomach of pork. And the third, the strictly artisanal process that is followed throughout the elaboration and the time of curing.

Its color is yellowish, creamy and without crust. Its aroma very powerful. The flavor is strong and somewhat spicy, slightly bitter at the end of the mouth.
The technique is laborious, the gorollos are formed, frustoconical portions that must be passed through the roller, repeating the process over and over again. Finally it is carefully molded by hand.
Casin Cheese

La Peral cheese is a type of cheese that is made in Illas, central area of ​​Asturias. It is a cheese that keeps true resemblance to French Roquefort, of noble mold, and matured in a natural cellar for about three months.
Cheese without bark, unctuous and yellowish white. The interior is firm but not compact, with cracks and cavities where mold develops.

It is the first processor of Ecological Cheese of Asturias, certified by the COPAE (Regulating Council of Organic Agriculture in the Principality of Asturias). It is made in Siero, central area of ​​Asturias.
They make 6 varieties, but the best known is a pressed cheese made with raw goat milk pasteurized; The cut has a white color and firm consistency, with small eyes.
It is presented in a cylindrical format in pieces of 500 gr., 1000 gr. and 1500 gr.

It is made in Peñamellera Baja, municipality of the eastern part of Asturias.
We have two varieties to choose from, pure goat and mix, goat and cow. Its maturation is greater than 2 months, of pressed paste. It is a very balanced and intense cheese with wide aftertastes, but slightly spicy. This 2016 has received the “Best Cheese of Asturias 2016” award from the Plaganu Cheese Tasting Association in the framework of the XXXVI Avilés Cheese and Wine Fair.

It is made in Parres, municipality of the eastern part of Asturias.
It is a soft cheese with a mild and buttery flavor that is made with raw cow's milk, rennet and salt. Unctuous texture and aroma reminiscent of rural creams. It is a cylindrical cheese of small size because the pieces are half a kilo.