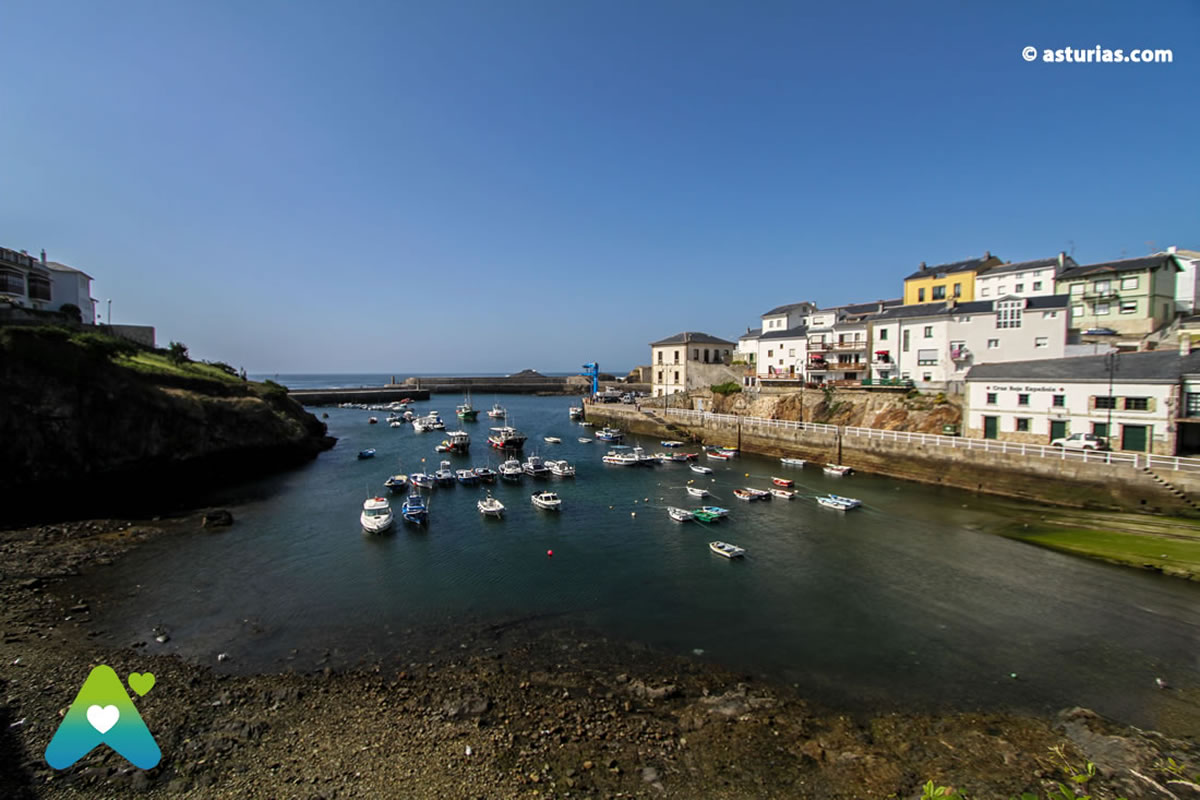 The fishing village of Tapia de Casariego is a coquettish enclave of the Asturian west coast. Its fishing port keeps the essence of always and its beaches and coves provide one of the most refreshing baths in Asturias. Tapia, with privileged waves, is one of the meccas for surfing in Spain.

The municipality of Tapia de Casariego is located on the western coast of Asturias, in the northeast of the Iberian Peninsula. It has a total area of ​​65,99 Km² and has a population of approximately 4.455 inhabitants. Today is a important summer and leisure resort.

How to get to Tapia de Casariego

Currently the easiest way to get there is by taking the A-8 motorway. Distances: Oviedo 141 Km. // Ribadeo 11 Km.

The history of Tapia is recent since until the middle of the XIX century its territory belonged to Castropol.
In the area they have been found Prehistoric materials corresponding to the Lower Palaeolithic and typical of the Acheulean culture, which indicates the human settlement of the area a long time ago.
Also this territory is one of the most densely occupied by castros, there are nine in total: El Picón and Castello, in Campos and Salave; The Crowns, in La Roda; Las Cercas and the Castles of Pereira, in El Monte; Campo de San Lorenzo and the Castelón del Cornayo, in Serantes, and the Castros or Castro de Represas, in Tapia.

In 1154 the territory passed into the hands of the Bishopric of Oviedo, ceded by King Alfonso VII. In 1580 the confiscation carried out by Felipe II gave jurisdictional independence to the residents of Tapia and Salave; but It will not be until the XNUMXth century when Tapia manages to have its own town hall. Fernando Fernández-Casariego will be the architect of the conversion of Tapia into a town from the primitive village, making the Government accept in 1863 the creation of the new council of Tapia, independent of Castropol.

Illustrious characters of the town:
· Gonzalo Méndez de Cancio, was governor of Florida and the introducer in Asturias, at the beginning of the seventeenth century, of corn, which he planted for the first time in the field that was in front of his house.
· Fernando Villamil y Cueto, sailor and hero of the war in Cuba.
· Francisco Pérez-Casariego, illustrious of the council.

What to see in Tapia de Casariego?

· Palacio de Campos or Casona de los Magdalena, in the town of Campos.
· Palacio de Cancio Donlebún, in the town of La Veguina.
· Palace of the Cotarelo Villamil brothers, in the town of Serantes.
· The Plaza de la Constitución, delimited by three of the town's emblematic buildings: the Second School Institute, the Schools and the Town Hall.
· The port and the Isla de Tapia lighthouse.

· Easter: Surf Championship.
· July: Our Lady of Carmen // V Meeting of Artisans in the port of Tapia.
· August: III Handicraft Fair d´A Roda // XVIII Inter-Celtic Festival d´Occidente and Medieval Market. Declared an Event of Regional Tourist Interest in 2013 // XXII Campomar Fair. With many years of tradition, it is dedicated to the countryside and the sea.
· December 6 to 8: III Christmas Fair of Gifts and Opportunities.

to 0,20 km Eating barnacles is like eating the essence of the sea. The properties of temperature, salinity and density of the water in which it grows, as well as its richness in n ...

to 0,37 km Tapia has a lot of coastline, cliffs follow good beaches; calm waters that invite you to swim and waves rough enough for surfing. You...

to 0,38 km This natural saltwater pool is known as the Antonio Alonso Bedia “Toño del Moderno” pool and was inaugurated in 2010. Its saltwater is a...

to 1,60 km It is a complex formed by a large patio bordered by the house-dwelling, an old wood oven to bake bread, a drying rack, an outbuilding and the well ...

to 4,73 km Peñarronda beach, on the limits of the Castropol and Tapia councils, is a vast area, thoroughly prepared by nature so that ...

to 4,76 km Mexota beach, although not officially a nudist beach, has been a meeting point for lovers of this way of enjoying nature ...