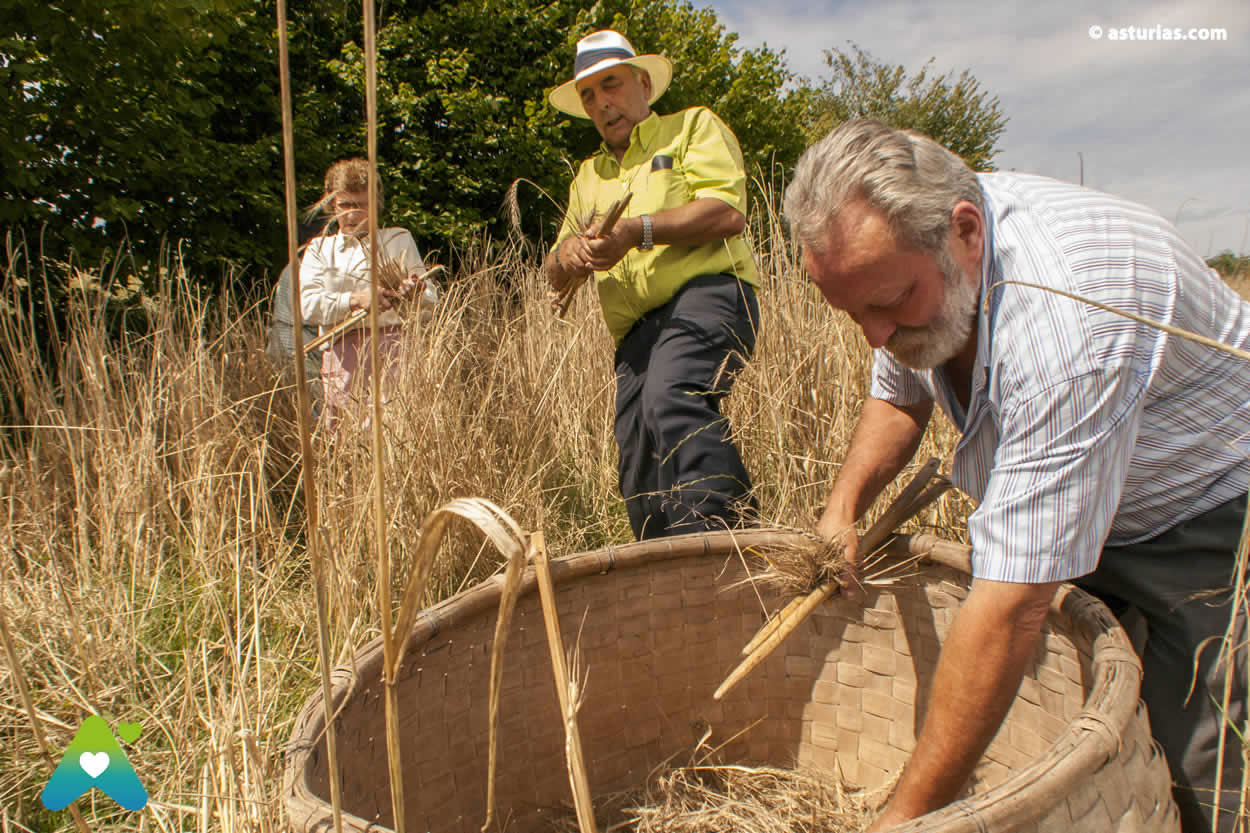 The spelled, "Triticum espelta", is a cereal with pedigree, very ancient and authentic. A wild wheat cultivated almost since prehistoric times. Its grinding dates back at least to 22.000 years before Christ in Israel. It is a plant well adapted to the Asturian environment, since from antiquity it is faithful to mountainous regions and very resistant to cold, to excess moisture, as well as to the attack of birds and insects by its pod (glume), which does not it comes off after threshing without the help of special mills.

After a continued decline of this crop since the sixteenth century, the new times and new market patterns, decanted by organic production and food quality, they place the Asturian Escanda before a new rebirth and a gradual extension of land for its cultivation. Far from trensgénicas interventions, the spelled keeps its origins intact, and moves away therefore of that gradual dominion of products without personality, lacking of aroma, flavor and even nutrients.

The Asturian spelled has an 50 percent more protein than common wheat, a high nutritional value that takes shape in numerous healthy characteristics, many more than any other modified wheat.

In Asturias, it is particularly worrying that the cultivated spelled retains its genetic essence, and with this a cereal is obtained whose protein content is higher than 14%, highlighting the presence of the 8 essential amino acids; It also has more flavor and is more digestive than white wheat; to the being the original seed produces less allergic symptoms, besides it contributes a lot of fiber and silicic acid: one of the most necessary nutrients in our organism since it helps the reconstruction of tissues and organs. The Asturian spelled stimulates the body's immune system, because it has a high content of vitamin B. Among the minerals that contribute include sodium, potassium, iron, magnesium and calcium. As if this were not enough, the fat that contains spelled is essentially unsaturated. It does not contain cholesterol and it is rich in essential fatty acids. Its high content in Tryptophan has positive effects on the general well-being of the body and mind since contributes to the production of serotonin.

Almost exclusively in Asturias an effort is being initiated for the replanting of the spelled, and the recent mechanization in the harvesting, shelling and milling process has allowed the spelled to expand its market without renouncing its ecological character. This at the same time leads to a resurgence in bakery and confectionery. Common wheat can be substituted for Asturian spelled in breads, cookies, cakes, pre-pastries, pasta, pizza, crêpes and cakes, as well as in pasta production.

As to spelled bread strictly speaking, it is based on a fine flour, spongy, grayish and not very dense. It presents great stability to the kneading. Once out of the oven, the bread is characterized by its smooth, soft and thin, orange-toasted rind; Its appearance is homogeneous to the cut, its spongy texture depending on the percentage of spelled used. It can be maintained for several days without losing the attributes of fresh bread. Its flavor and aroma is very peculiar, with a slight nutty touch.

The cultivation of the spelled deserves a special mention in the councils of Grado, Pravia, Belmonte, Somiedo, Proaza, Yernes and Tameza and bordering areas, as well as some parishes of Salas and Tineo, where they preserve this traditional cereal and of real ethnological interest.

Currently a company of the council of Pola Lena, Speltastur, produce around 300 annual tons of regional flour and its success serves to overthrow a single streak, since at the end of the nineties it was almost on the verge of extinction. Nowadays, spelled is a solid alternative for a hundred percent ecological agriculture in Asturias. Farmers are allowed to rotate crops on their land and extract yields from grain production, with the added use of straw for the animals. In the transformation of spelled everything is used: there is no waste.

Route of the Spelled

Rhythm tradition of cultivation, harvesting, shelling and baking is a real ethnographic luxury, which leaves no one indifferent to who attends step by step to its process. Since in August the ears are picked manually with "les mesories", passing through the most authentic husking in the ram or rabilar mill, until the slow time of the kneading and the preparation of the traditional oven.

Attending this kind of ancestral rite, is possible today if we go through the so-called Route of the Spelled, where asking locals we can go to these activities in the heat of authentic villages and peasants of the earth.

Along the route you can see on site various contraptions that served for the transformation of this product, such as yellow and electric rams, hydraulic mills and fornos. You can also enjoy breathtaking views of the Cubia and Narcea river basins. The first part of the Route starts from Grado to El Fresno, coinciding with the Camino de Santiago del Interior; The next section of the route, from El Fresno to Las Cruces, coincides with part of the Camín Real de La Mesa, one of the main communication routes with the Meseta from prehistoric times until the last century.

The grade villa is only 27 kilometers from Oviedo. It is reached through the A-63 highway "Oviedo - La Espina" and the N-634 national road. Degree is very well connected also with Pravia, the Airport and Avilés, through the regional AS-235 and AS-237.

to 0,98 km A wide and varied exhibition that takes us back in time and brings us visually, didactic and entertaining to the most traditional culture of this region ...

to 4,49 km The entire complex has been carefully restored respecting and rescuing lost aspects throughout its more than 250 years, the fruit of the romantic dream ...

to 7,77 km La Casona is located in the central area of ​​Asturias, close to the port of Cudillero, the Cantabrian Sea and its beaches (18 km.) And on the banks of the Narcea do ...

to 7,88 km La Casina is located in a privileged enclave, on the banks of the Narcea river, in the town of Corias. The house is restored respecting the character ...

to 11,30 km Village house from the middle of the 19th century rebuilt respecting the traditional architecture of Asturias. You will find us in Sograndio, an exemplary town in XNUMX ...

to 12,86 km Surrounded by meadows a few meters from the Narcea river and near the Somiedo Natural Park. FACILITIES All rooms are double, spacious with ...