The Natural Park of Somiedo is a piece of land of great beauty designed for nature lovers. It is located in the southern area of ​​the Principality, bordering the border of León. It is a territory dense in environmental and cultural values. Its surface occupies the not insignificant figure of 300 square kilometers. A whole world of unevenness: soft and steep reliefs that vary from the 400 meters to higher levels than the 2.100 meters. In between, the rest of the altitudes keep a treasure different from the view, a cluster of scenery and endless routes that will force us to plan the excursions.

Visit the Somiedo Natural Park must be above all an exercise of patience and ecological and cultural respect. You cannot see in a hurry nor is it allowed to leave any material or object that was not there before in the Park. This territory already had settlers at the beginning of the Bronze Age and is still practically intact. The archaeological landscape reveals ancient burial mounds, forts, and in its dazzling brañas we come across the most well-known hallmark: the cottages of teito, which are stone constructions covered with a broom, a wild shrub scientifically known by the name of Cytisus scoparius, and which in Somiedo is called "xiniesta".

The Brañas de Pornacal and Mumián constitute the most important ethnographic ensembles in this sense. The cabins take us back to a feudal age, it seems that we have traveled back in time. In our eyes they are immemorial and romantic. However, the cabins have been fulfilling a vital function to date, eminently livestock, as hay stores and shelter for grazing. livestock it has been the economic activity par excellence; and tall grasses in the summer and the stabling of livestock in the winter have determined the biological clock of the park's inhabitants, especially the popular population of the vaqueiros of elevation, the Cantabrian nomads.

Every year in spring, the Vaqueira family leaves their winter dwellings and, together with their animals and belongings, travels to the summer villages located in the mountain areas.. Sometimes these displacements exceeded one hundred kilometers, as some families "rose" from the coastal area to the southern slope of the Cordillera, already in Leonese lands. Currently persist about fifty families They move from the councils of Tineo, Salas and Belmonte de Miranda to the Somiedo summer towns (El Puerto, La Peral, La Falguera and Llamardal). The vaqueira population has contributed and contributes many contents to the ethnography of the municipality, and it is in its musical folklore where its ancestral character manifests itself most strongly.

The council of Somiedo adds 37 population centers grouped in 14 parishes. The towns are currently facing unknown challenges: the crisis of the traditional economy, rural aging and the commitment to new approaches to progress in a protected area that, as Biosphere Reserve that is, it is governed by a rather rigid regulation. The rules are strict and end up conditioning the sociology of the territory in order to preserve its privileged nature. 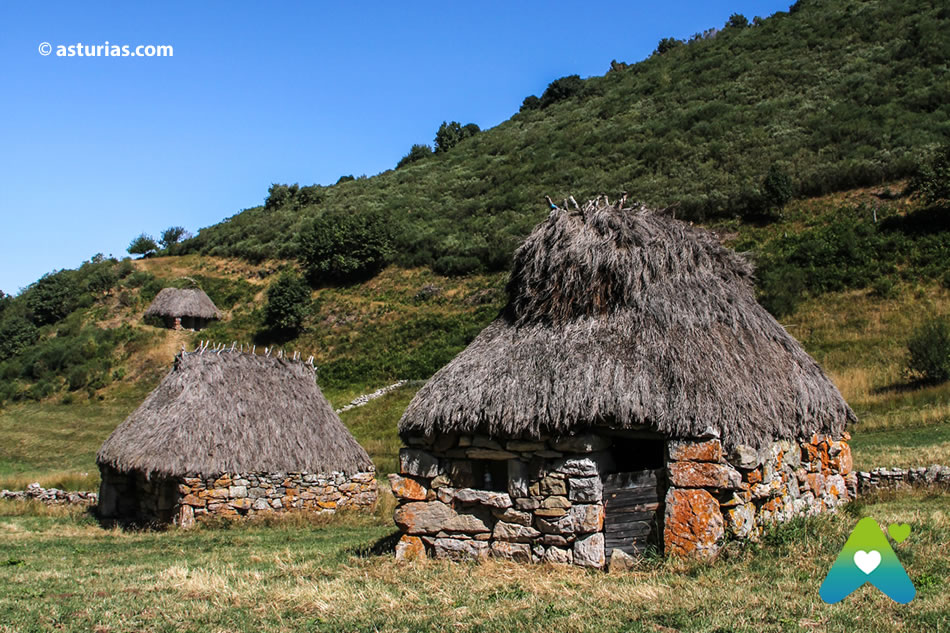 When traveling Somiedo out of their villages, for their mountains and valleys, we must respect our integrity and not be too reckless. You have to realize that we are in a high mountain space and that it is convenient to leave notice of the itineraries that we plan to carry out, not to venture into high areas in bad weather, carry a detailed map, a compass, suitable footwear ... If we are well equipped we will discover that beech trees are the most frequent forests in Somiedo and that usually populate the slopes. Other forests present in the Park are oak groves, birch groves, alder groves and holm oak groves, which overlook in valleys of glacial origin and karst peaks of abrupt geology.

How many bears are there in Somiedo?

In Somiedo there are between 15 and 20% of the bears of the Cantabrian Mountains. There are some 50 copies. The area of ​​highest bone density in Western Europe. Mountain species also include the chamois, golden eagle, roe deer, deer, marten, squirrel, dormouse, genet, wolf, grouse ...

Where can bears be seen in Somiedo?

There are two areas where there are always people with binoculars, telescopes and other accessories to immortalize the moment, they are Gúa and La Peral, on the way up to the Somiedo pass.

It is estimated that the bear colony exceeds 200 individuals, mostly in western Asturias: in Somiedo. East…

How many lakes are there in Somiedo?

Somiedo is an ark of Noah and a land of legend, it also lacks the mist, forests or lakes. The territory is crossed in its totality by lands that belong to the upper basin of the Pigüeña river and its tributaries, and they are very numerous the lakes and lagoons. Stand out the lakes of Valle, Cerveriz, La Cueva, La Mina and Lago Negro or Calabazosa, all of glacial origin. Along with these of more importance, there are numerous small lagoons, such as Lake Bueno, Laguna Cabera, Redonda, Llamazo, Fontarente, Lake de la Mesa, Camayor, Fuentes, etc. some of which are temporary and dry out during the summer.

There are no words to describe them. Must see. The lakes of Saliencia are a diamond in the rough, one of the ...

Somiedo does not have direct access by rail, however, the big lines can leave us in Oviedo or León, which are points reasonably close to Somiedo. From there, the accesses by road in public transport are very well taken care of by the company ALSA that communicates the council practically with all the parts of Asturias.

For those who use the private vehicle, Somiedo has two possible entrances; in the North and in the South. If we come from Madrid or another point of the interior, the most reasonable thing is to use the A-6 to Benavente, where you take the N-630, direction León. A little before León, in Onzonilla, we will see the indicators of the A-66 toll road, direction Oviedo. After a few kilometers, we will cross an impressive cable-stayed bridge over the reservoir of Barrios de Luna, once past we are announced the exit towards Villablino, which we will take to Piedrafita, where we will see the Puerto de Somiedo. Immediately we will arrive at Santa María del Puerto, the first town of Somiedo and the one that marks the beginning of the descent of the port that leads us to Pola de Somiedo.

For those who opt for the North entrance, you have to take the N-634, Oviedo-La Coruña, until a little before Cornellana, where there is a large crossing perfectly signposted. Then, a little further on, we turn to the left again. to take the AS-227, which passing through Belmonte de Miranda, leads us to Pola de Somiedo without possible loss.

to 1,39 km In Somiedo, as is logical in a municipality of 300 km2, there are a thousand and one possible routes, some of these itineraries have been signposted, ...

to 1,42 km In the heart of the Somiedo natural park, the waters of the El Valle river and the Sousas river have been moving the turbines of the La Malva power plant for more than a century ...

to 3,06 km In the rural tourism accommodation in the area they will offer us practical advice to get to the ideal locations where to witness the bellowing ...

to 4,10 km The somedano Ecomuseum has two locations: Caunéu and Veigas. In the first one, the exhibition focuses on two parts: the trades and the ethnographic routes ...

to 4,94 km Casas La Laguna are a special place to stay in Valle de Lago, the most beautiful town in the Somiedo Natural Park. Voted by travelers as ...