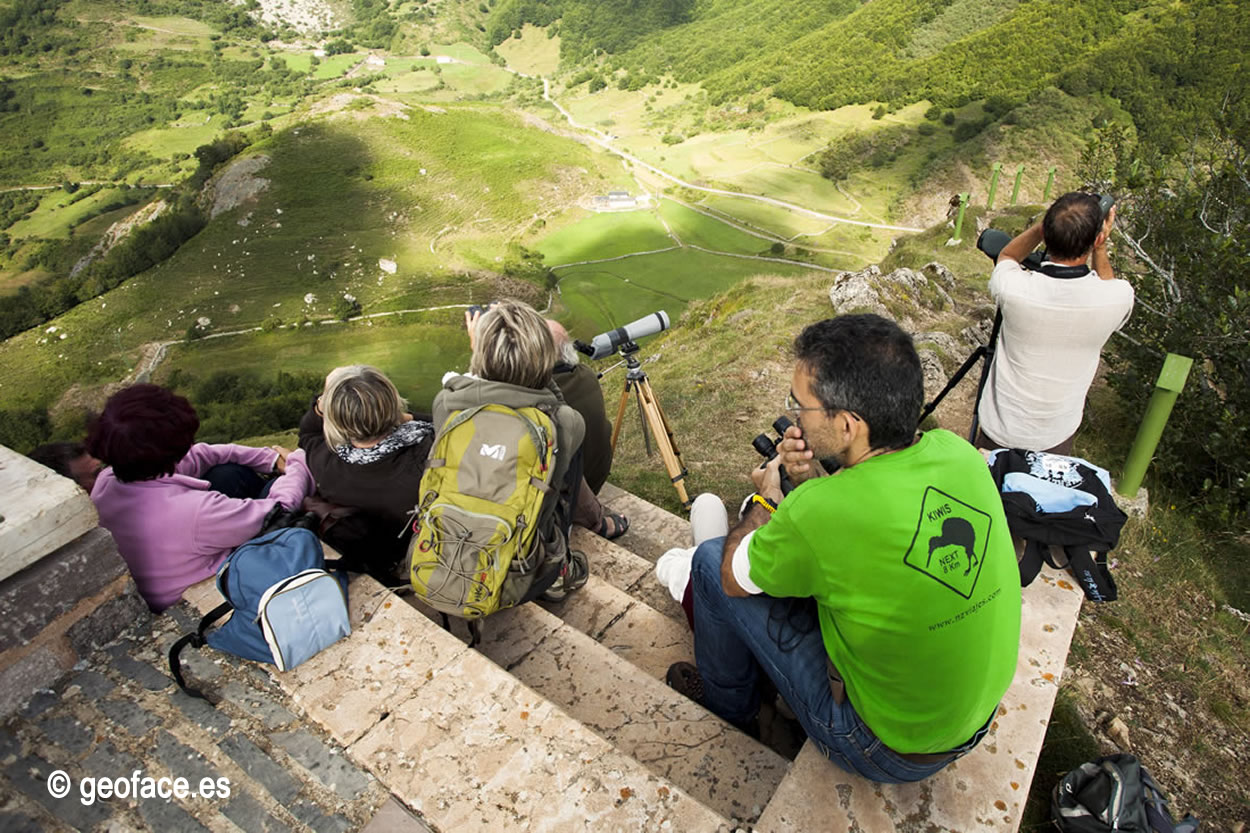 It is estimated that the bear colony exceeds 200 individuals, mostly in western Asturias: in Somiedo. This fact speaks for itself: Asturias has the highest environmental quality in the Peninsula. That is why seeing bears in the wild is a responsible exercise, subject to strict regulations and increasing regulation.

Only a few years ago, few people could boast of having seen a bear in the wild; At most some footprint or excrement. Currently, brown bears are regularly sighted in the Asturian mountains because its population has tripled in the last decades.

Can we see bears?

The possibilities are nil without the accompaniment of qualified guides, with very precise knowledge about the territory and behavior of plantigrades. Venturing on your own initiative in the Asturian mountains is not only a waste of time but also reckless, as they may feel threatened by human presence and react violently. In addition, it is strictly prohibited and punishable by law to disturb or disturb them. They live in integral reserves whose visit is prohibited in some cases and access is restricted in others. The preservation of these natural spaces has been essential for the reproduction of bears.

Even with everything, we can see them. We must follow some basic rules and be patient. First, hire the services of professionals. They will indicate if the conditions are favorable or not, and will guide us to the most suitable observatories or observatories. The sighting is never guaranteed. Do not despair. If necessary, you will have to access these places for more than a day or two. We are more than a kilometer away. From the observatories, with our telescopes and / or binoculars we will comb the slopes and clearings of the forests where they hide.

When to see bears in Asturias?

The best time to do it is spring (April-May), because when the heat is intense they rarely leave the interior of the forest, and late summer-early fall (end of August, September, October).

If we have not had luck with the bears, we will have it for other reasons. We will feel the emotion and magic of nature, we will understand the incalculable value that protected spaces have; scanning every corner with our teles. The bears coexist with other species characteristic of the European deciduous forests in general and of the Iberian fauna in particular: raptors, deer, wild boar, chamois, wildcats, foxes and wolves.

Who takes us to see bears?

Wildlife sighting companies They facilitate transport and a guide interpreter of the natural environment.
Almost the entire Cantabrian Mountain Range is protected due to the natural value of the spaces it houses, where species of mammals and birds that are representative of European deciduous forests live. On the coast, the wetlands, cliffs, or islets are a refuge for birds and mustelids. In the waters of the Cantabrian Sea, the Kraken lives with different species of cetaceans and many other seabirds. We can book online here…

We will wear comfortable shoes, a hat or cap, sunscreen, a raincoat, a change of clothes, water, food and a spotting scope or binoculars..

In what areas do brown bears live? Where can we see them?

Adult bears with cubs and big males are spotted every year in the mountains of Teverga, Somiedo, Cangas del Narcea, Degaña and Ibias; territories crossed by large autochthonous forest masses and characterized by an excellent state of conservation. This is the southwestern area of ​​Asturias with a greater presence of individuals from the entire Cantabrian mountain range.

The gradual recovery of the species in Asturias seems to put an end to a tragic story. King Favila, son of Don Pelayo, was killed by a bear in the year 739. At that time they were very abundant and killing them was a way of showing value to the subjects. For centuries it was the greatest hunting trophy. Once their hunting was prohibited, poaching reduced the population for decades. In 1962 there were 77 bears in Asturias.

The fact that two hundred specimens have been reached -thanks to decades of conservationist policies- is not synonymous with long-term survival. For this to be a reality and completely remove the danger of extinction it would be necessary to reach the number of 500 players. Researchers estimate that in a bone population only a quarter have the ability to procreate. So the Cantabrian brown bear would only be really safe when it adds at least 2.000 individuals.

The challenge for the coming years is the identification and adaptation of the corridors through which the males migrate between western and eastern Asturias. The eastern bear population has been stagnant for years, with no more than 30 individuals; the same figure as when the recovery programs for the species began in 1989. The Bear Foundation opted in its day to transfer specimens to achieve an artificial crossing and promote the recovery of the eastern subgroup. This idea was scrapped by the administration. The settlement of bears in the central area of ​​Asturias does seem to be growing, which would favor a future migratory corridor. The Fund for the Protection of Wild Animals (FAPAS) has already identified nearly about thirty copies in the councils of Santo Adriano, Proaza and Teverga. The demographic progression in this connection zone has been spectacular since the 2004 year was the first time a bear with young was found.

Protectionist measures are increasing in search of long-term survival. Since the year 2005, FAPAS has been developing the "Fruits for the Bear" project. A commitment to increase the amount of fruit trees, cherry trees and chestnut trees in the areas of bone presence.

How do bears live? What do bears eat in Asturias?

Its ideal habitat is the mixed forest, consisting of beech, oak and birch, heather, blueberries and blueberries. The steep and rugged slopes are very popular with bears with cubs, who turn away from the males in the mating season to protect their cubs. Males sometimes kill offspring they do not recognize as their own to ensure that their genetic heritage prevails. The bears defend themselves in their own way, they allow themselves to be covered by the largest possible number of males so that all of them claim the fatherhood of the cubs. The time of heat is in May or June.

They eat young leaves and shoots and scavenge for tubers, roots, and insects.

What kind of bear is there in Spain?

The Cantabrian brown bear is an animal with a robust appearance, short and rounded ears, a short tail and a very abundant and thick coat, agile, with great speed at a gallop. They have varied colors but the most abundant is the brownish-yellow. The male may exceed 180 kg. of weight. Young are born during hibernation, defenseless, with little fur and no teeth. The variety of the coat facilitates population censuses. The characteristics of the mother added to those of the children help to differentiate some family groups from others.

The females have territorial differences and it is easy to associate them with specific places. Adult males are much more explorers. It has nocturnal habits and can travel tens of kilometers in a night in search of food.

to 0,22 km Asturias has the privilege of still possessing forests of extraordinary beauty and enormous biological wealth, populated by hundred-year-old trees, bears or ur ...

to 0,22 km Nowadays, for a decade, new producers have tried to save an enviable heritage. Although the humidity of the Cantabrian does not seem to promote ...

to 0,63 km Cangas del Narcea has traditionally been isolated, poor communications and the remoteness of the large urban centers of the region have led to ...

to 1,12 km This museum opened its doors remodeled in July 2010, with an elliptical design, similar to a basket and integrated into the environment. The permanent exhibition ...

to 2,00 km La Casona II is located in the central area of ​​Asturias, on the banks of the Narcea River where you can fish for trout and salmon or enjoy its waters. Close...

to 6,53 km A spacious manor house was the birthplace of the writer of the generation of 27. Today, the house is still owned by the family. Alexander would choose the ...