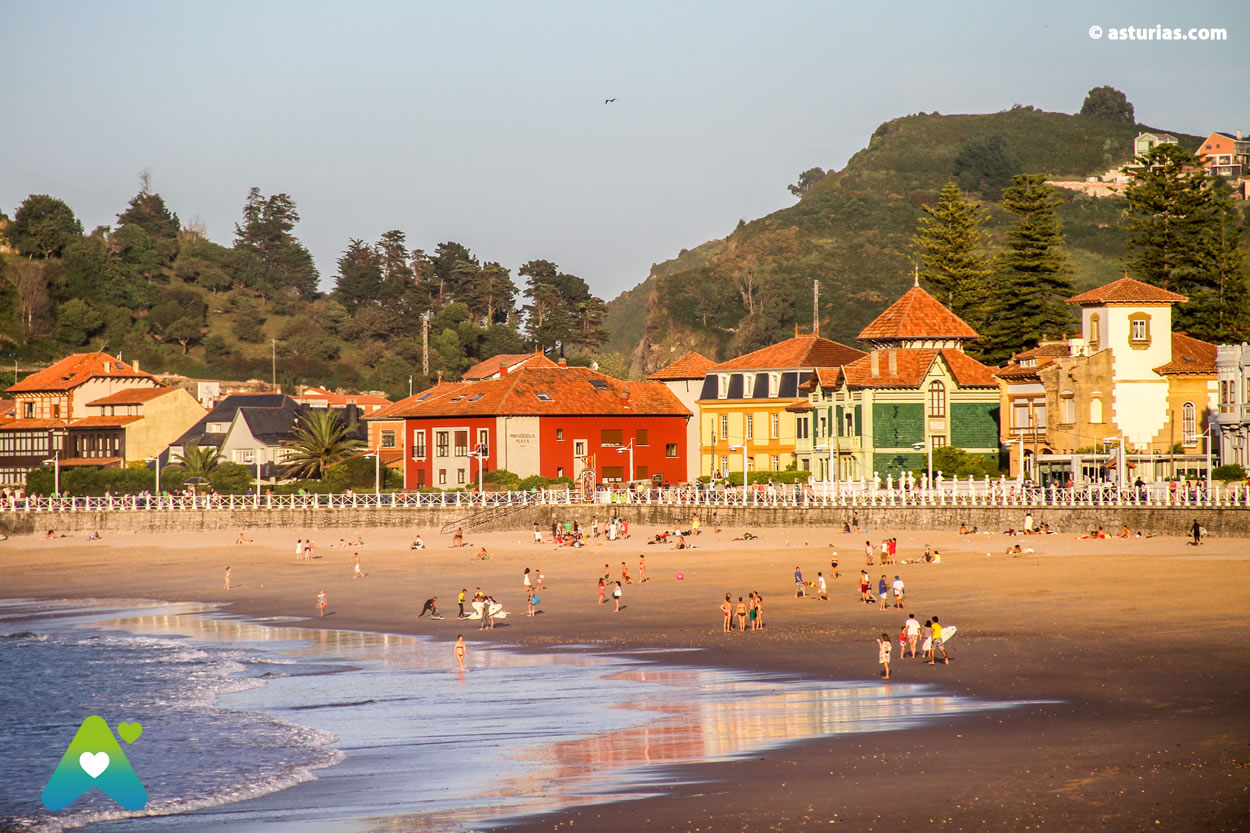 Santa Marina, something more than a beach

Santa Marina, something more than a beach

There are few beaches in the Bay of Biscay that draw such a spectacular panorama and are surrounded by a landscape so contrasted. Taking an aerial view, or spotting the beach of Ribadesella from the popular paseo de Guía, on Mount Corberu, we discovered that the Sierra de Escapa, the mount el Mofrechu or the Sierra del Sueve provide an extraordinary backdrop. High peaks that descend slowly to the same level of the sea and that grant a sublime perspective.

We also observe how the river Sella, which flows into the same beach, creates one of the most beautiful estuaries in Asturias. The estuary outlines a great curve and gently mixes with the sea. It is a delta that also adds to the beach its nautical, fishing and recreational dimension.

On foot of sand we discovered that Santa Marina beach is not just another beach, but a space of a kilometer and a half in length where heritage, history, tourism, society and ecology are combined. The idiosyncrasy of this sandy area derives from a distinctive past. Before the XNUMXth century it remained unchanged, raw, communicated by boats, like a lonely shell-shaped island, close to an extensive wetland that was the ideal habitat for numerous species of migratory birds. The beach was flanked by Mount Somos and the Corberu, two equally virgin promontories at that time.

When the metal bridge over the estuary came into service at 1898, the Arenal recalled the inhospitable places that inspired the painters of the time. But the improvement of communication with the beach brought the first urban colonization of the area. Modernist villas, palaces and villas nowadays they keep all their charm and give Santa Marina that unique stamp with which the contemporary stroller delights, surprising for its architectural coquetry. 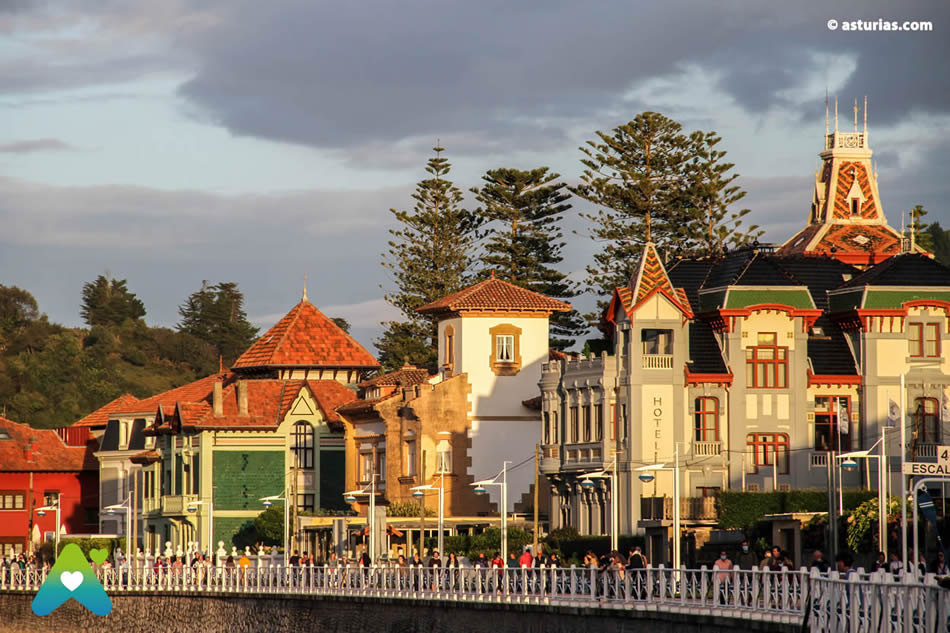 The beach of Santa Marina is sand, sea, bath, sun, surf, jogging, ... but it is also contemplation and admiration. Traveling through its seafront the beach transmits many new sensations for those who do not know it. The beach is also part of the Camino de SantiagoFrom there the Camino goes to San Pedro, Abeu and Leces, where there is a pilgrim hostel.

Su peculiar urbanism does not leave indifferent. On the beach we discover the buildings of the first vacationers: members of the aristocracy and the Madrid and regional upper bourgeoisie who arrived on the beach attracted by the fashionable spa phenomenon at that time. On the initiative of the Marquises of ArgüellesIn 1910, the beach resort opened its doors, offering services of sea baths, iodine and seaweed. Shortly after, the construction of chalets lined up facing the sea began, such as that of Marquesa de Argüelles herself, Villa Rosario, Antero Prieto's villa (later Uría Aza) and Villa San Pedro. Clear examples of this period.

During the years 20 and 30, The sandy area of ​​Santa Marina gradually became a tiny garden city that, before the Civil War, was already made up of some thirty sumptuous chalets. Architectural elements such as towers, glazed viewpoints and terraces proliferate in these constructions. Until the 60s this garden city would not suffer the effects of developmentalism. Thereafter, the aristocratic three-month vacation would give way to the minor vacations and weekends of the middle class. At the end of the 80s and the beginning of the 90s, the culture of the townhouse was introduced in Arenal, in its version related to the second residence, of which there are also clear examples on the beach.

In terms of beach leisure, Santa Marina is a populated beach in summer, with a medium-high occupation and conducive to water sports in its surroundings and in the attached estuary.

The pedestrian accesses to the arena are comfortable and easy with stairs and ramps. Dispose of lifeguard service, warning of danger through public address, showers and toilets. We can also sit in one of their terraces, savor a good appetizer and some canes and let the time pass peacefully, enjoying its great summer atmosphere.

Santa Marina offers multiple facets for enjoyment in all seasons. We have already mentioned her walk, unique in its kind when combining an intimate maritime landscape, a very personal architecture or Jurassic sites. In its immediate environment we can also tour the Malecón Natural Park, a wetland enabled with platforms and trails that help us discover all its ecological wealth, among which a large colony of wild ducks stands out.

Biblioplaya. The service will be open from July 1 to the end of August 2022 as long as weather conditions do not prevent it. It will open from Monday to Friday from 14:00 p.m. to 19:30 p.m. and on Saturdays from 16:00 p.m. to 18:30 p.m. It makes available to users a bibliographic collection made up of children's and youth literature, comics, novels and informative books. In addition to magazines and press, two regional newspapers, and a sports newspaper.

As a complement to the reading and book lending service, two free weekly children's workshops are also organized on Tuesdays and Thursdays from 17:00 p.m. to 18:00 p.m. They are aimed at children from 5 to 10 years old. Registration will take place at the Biblioplaya booth. There are limited places.

to 0,08 km Located on the beachfront, residential area of ​​Ribadesella, Hotel Don Pepe has absolutely privileged views of its surroundings, ...

to 0,20 km Some argue that in the local port, back in the XNUMXth century, at the height of maritime trade, smuggling activities proliferated that elu ...

to 0,20 km Surf Camp Ribadesella as a surf school in Asturias offers you the possibility of signing up for group surf courses or receiving private lessons ...

to 0,21 km Our vacation home is for full rental, with capacity for 8 guests. It is located next to the Malecón, a very quiet area in the beautiful local...

to 0,35 km The Verdemar Hotel is located on the shores of the Cantabrian Sea, on Santa Marina beach, in Ribadesella. This newly built hotel has been designed in ...