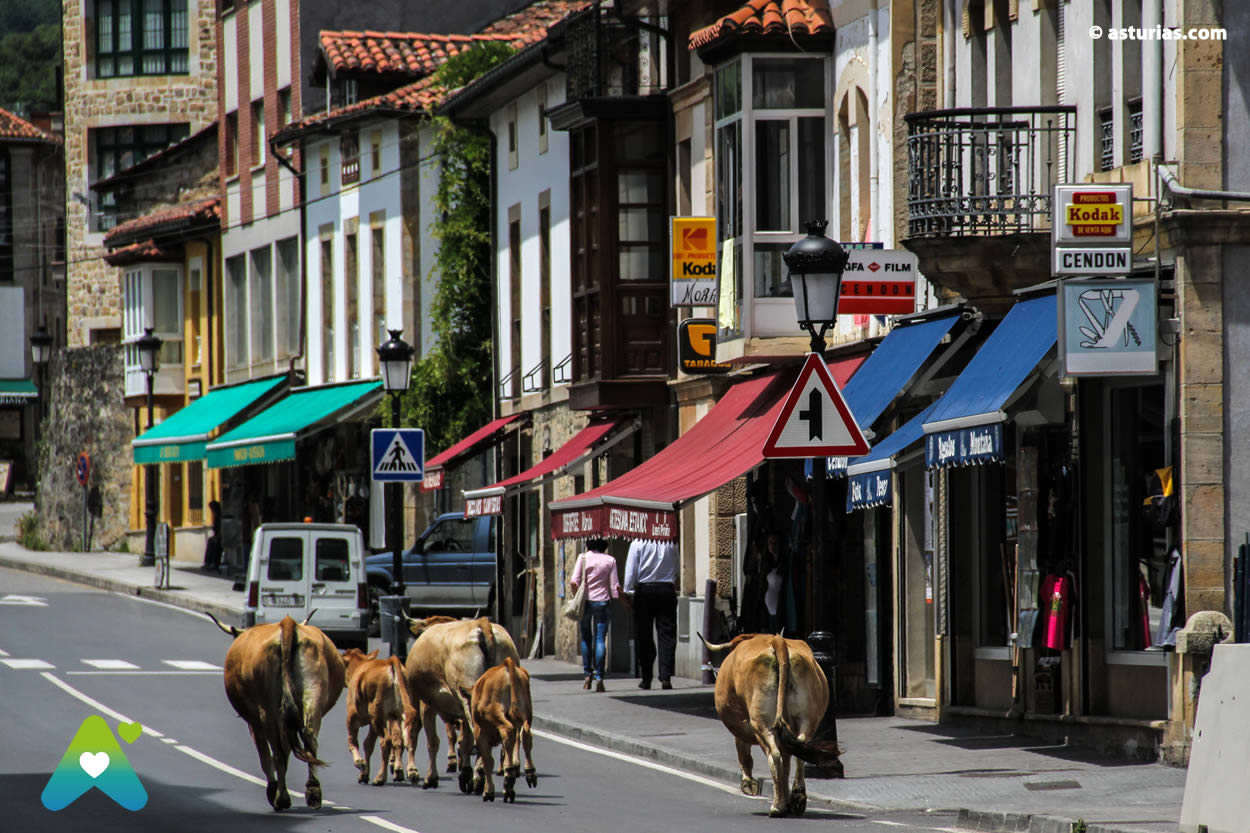 The door to the Picos de Europa

The door to the Picos de Europa

Arenas de Cabrales is one of the towns required to enter the Picos de Europa National Park, as well as to explore the mid-mountain area of ​​the rest of the municipality of Cabrales. It is a very cozy town, with a great gastronomic and hospitality offer, mountainous and healthy atmosphere, with a rich traditional architecture and a privileged natural environment, surrounded by sheepfolds, which is undoubtedly one of the most beautiful in Spain.

Famous for its Cabrales cheese, Arenas de Cabrales has many other attractions for the visitor. If its strategic location for mountain lovers, we add its endowment of houses and rural hotels, campsites, adventure companies, restaurants, shops of typical products and souvenirs, we are facing one of the main tourist sites of the National Park. The varied orography, the rich mountain pastures that we glimpse from Arenas, the cattle hut present in the daily life of the locality, the tanned hands of the shepherds, their passion for artisanal elaboration and the culture transmitted from generation to generation are patent to every step we take through its streets. The ancestral farming customs They remain practically intact thanks to the natural isolation of these highlands.

Gastronomy of the Picos de Europa

The pleasures of local cuisine are exceptional. El Cabrales cheese, archifamoso in the whole world, knows much better in its original environment; here it is used masterfully as a sauce of numerous dishes. In addition, Arenas is the headquarters of the El Cabrales Cheese Contest which is celebrated every year coinciding with the last Sunday of the month of August; an event declared a Festival of Tourist Interest, in which, in addition to exhibitions about the product, demonstrations of its elaboration are carried out. The locality also hosts La Cabrales Cave-Exhibition: a permanent exhibition in which the cheese's present and past are made known through guided visits inside a natural cave.

Mountain airs enhance the flavor of numerous other typical products such as the pot or Asturian fabada, which in Cabrales have been consumed since time immemorial to face the hardness of grazing work. And it is precisely the meats derived from this ancestral herding that have the most acceptance. Not in vain, every year in the month of June are celebrated the gastronomic days of reciella organic meat: cabritu and lamb of the Picos de Europa, where restaurants in the area offer menus at a good price. Other meats, such as those of Pitu Caleya (house chicken) or Asturian veal red meat, do not lag behind. Arenas stars two relevant livestock fairs annually.

A strategic place in the Picos de Europa

Its origins are lost in prehistory, as attested by the survival of Corri-Corri, primitive dance in force throughout the area. 15.000 years ago Arenas was already populated; there are cave paintings of the Cave of the Covaciella. It is painted bison that motivated its declaration by UNESCO as a World Heritage Site. The cave is not visitable, but a scale reproduction of it can be seen in the Prehistoric Park of the town of Teverga. The Romans were interested in their precious metal mines, and enabled roads such as those of Caoru or Portudera (which goes to the top of the Caoro to continue towards Sotres and Áliva, where it branched off towards Liébana and Valdeón) to transport the metals extracted from the subsoil.

Arenas de Cabrales is the most important gate to start all kinds of sports in the Peaks, from climbing to Urriellu (Naranjo de Bulnes), through the walk of la Ruta del Cares, the beautiful climb walking (or by funicular) to Bulnes, or reach with effort the beautiful locations with higher altitude of Sotres y Tielve down dreamy steep trails. Other possibilities such as cycling or horse riding expand a range of options that are inexhaustible for hikers. The proximity of a practically littoral mountain range, the Protected landscape of the Sierra del Cuera, also offers a good number of attractions for caving enthusiasts.

What to see in Arenas de Cabrales

In some respects, Arenas seems stopped in time. It is necessary to wander through the interior of the town to be able to appreciate a beautiful popular architecture. Stone houses with their wood corridor and eaves patiently worked, with their gates, windows and roofs of Arab tile. We will also find palaces like the splendid one of Mestas and Cossio, built at the beginning of the XNUMXth century, in the Baroque-Renaissance style, with a nearby chapel, that of San Juan. This was a funerary chapel from the High Middle Ages, so it is surrounded by a necropolis. There are several houses of medieval origin such as La Corralada or La Papera. Very close to the Plaza del Corral, in the Torrejón neighborhood, we find The House of Torrejón, a palace house of the XV century, rebuilt in the XVIII.

Perhaps the architectural jewel of the town is the Church of Santa María de Llas ascribed to Asturian Gothic, a transitional Gothic with elements still Romanesque. What is most striking is the geometric decoration of the ceilings. The visitor will also be interested in the drawings that adorn the walls of the church, brought to light thanks to recent reforms and whose authorship would be attributable to the pilgrims of the Middle Ages. Next to the temple a spectacular yew testifies to the antiquity of its foundation.

On the outskirts of Arenas curious Batan of La Pisa de la Sertal, an ancient and voluminous ingenuity used to caulk the wool.

Arenas de Cabrales has hotels, apartments, rural houses, hostels ... a wide variety of establishments to sleep in this area of ​​the Picos de Europa. In our link we offer offers and direct contact with the owners, without intermediaries or commissions.

to 0,08 km By car you can take a complete tour of the cultural and artistic legacy, as well as discover the forests, parks and natural monuments of A ...

to 0,08 km We offer two tourist apartments for two people each. They are located in an old house (1779) recently restored, keeping in the ...

to 0,08 km Old house recently restored, located in Arenas de Cabrales. It has 4 beds, distributed in 2 double rooms. It also has salt ...

to 0,09 km The Hotel Picos de Europa is located in Arenas de Cabrales, a beautiful town at the eastern end of the Principality of Asturias, on the banks of the Cares River and ...

to 0,16 km Comfortable rural apartments located in Arenas, a town in the Picos de Europa. Its location inside the mountain and its traditional architecture ...

to 0,16 km Routes in Western Asturias · Vaqueiras Routes There are many itineraries that we can undertake to recover the visual memory of a town with ...