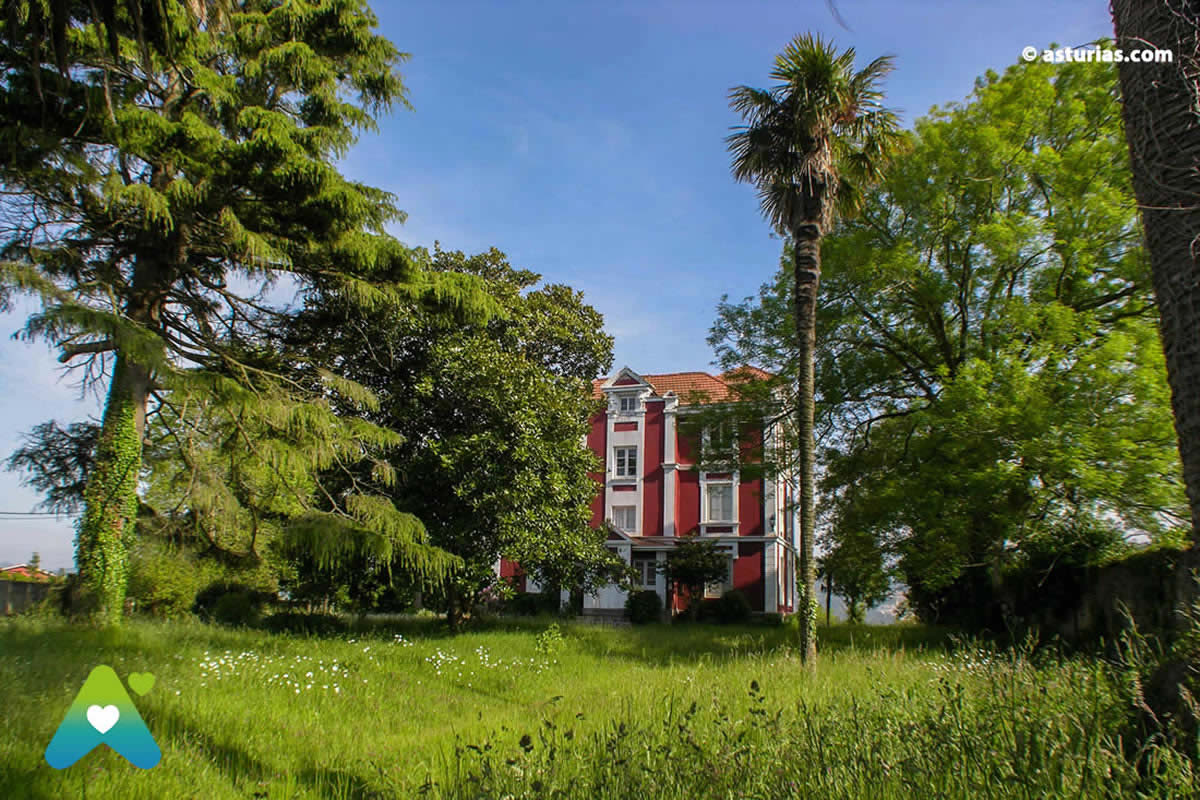 Monumental facades, ornamented gates, galleries, patios, balconies, dream covers, private chapels, exuberant gardens, large pillars, exquisite details, splendid handicrafts, laborious works of stonework, alfices, pilasters, recercados, bulky staircases, viewpoints, domes ... own elements of an eclectic and ostentatious architecture that, keeping the forms and the symmetry, they made fashionable those men and women who made the americas and who, unlike the so-called "alpargata Indians" who suffered the misfortune of emigration, managed to forge a great fortune in the new continent . Back home they practiced a competition not known until then in their humble rural environment: to capture in new homes all the wealth of which they showed, always try to make your home the most beautiful and striking.

In Colombres, Ribadedeva, the enriched Indians radically transformed the small rural village into a modern villa, with a colorful and exotic architecture. The main urban references of the town, those that gather around its elliptical square, such as the Town Hall, the Baroque-inspired Church, or the Quinta de Guadalupe are due to American money. In the center of this space there is a statue dedicated to the promoter of the square, the Count of Ribadedeva.

In the large houses that dot this municipality we usually find a striking palm tree, a symbol of class that helped to leave no doubt about the origin of so much money: America. And the towers, which since medieval Asturian times are a clear element of distinction, of noble memory, of power, were reused by the Indiano to ennoble his recent social ascent. The desire to show luxury and wealth, made the facades filled with classic references, baroque, but also regional.

We indicate the most outstanding properties of this municipality in its Indian design.

1 Quinta de Guadalupe. In its architecture, the railings, the glass galleries and its impressive exterior gardens stand out.
2 Iñigo Noriega Mendoza's mansion. It was ordered to be built in 1877. An impressive mansion that is located right next to the Archive.
3 · City Council of Ribadedeva. Stately-looking building that is more typical of a town or city than a small town.
4 · Red House. Very popular for being the setting for the series “La Señora”.
5 · Stone house and annex. Today it houses the House of Culture of Colombres
6 · Las Raucas Farm. Formerly the headquarters of the Banco Hispanoamericano's board of directors, it has the shape of a parallelogram and stands out for its sobriety.
7 · House of the Lions. Named for the lion's head placed on the balcony.
8 · The Sunshine. House built in the 20s with mountain influences.
9 · Twin Houses of Florencio Noriega. The second oldest in Colombres, from the end of the XNUMXth century.
10 · The Cantu. Built in the twenties, stands out prismatic block and its upper terrace.
11 · Parish Church of Santa María. Atypical neo-baroque style church that was completely renovated at the end of the XNUMXth century thanks to the funds contributed by Indian emigrants.
12 · Fifth Buenavista. Very well made, flanked by two large palm trees, it has one of the largest gardens in Colombres.
13. Grandpa's Mansion. The Mansión del Abuelo may not be the Indian mansion that stands out the most, but it is one of the oldest. The person who built it was the older brother of an important family saga: Víctor Sánchez Escalante.
14 Villa Delfina (Bustio). It is located on a hill, with privileged views over the port of Bustio and the bridge that forms the boundary between Asturias and Cantabria.
15 · The Villanueva Villa (Villanueva). Indian mansion from 1908 that is dominating the mouth of the Deva River.
16 · The Palm Tree (Noriega). Eclectic in style, on the main façade the attic with sloping ceilings stands out.

It is, in short, singular Modernist palaces and mansions; an unprecedented mix in which prestigious architects were employed who knew how to find the balance between disparate elements and build properties with their own name. Indian architecture is not traced to any other, is a new entity that is worth discovering. In Ribadedeva, one of the councils with the best samples of these houses, they have proposed to show them through a route in which we will discover more than a dozen constructions very representative and very beautiful. As they are private houses, they are not open to the public, but it is known that in many cases they are perfectly preserved and allow us to have an exact idea of ​​the decoration that was in fashion at that time. Wallpapers, silks, curtains, mirrors, hardwood furniture, lamps and bronzes or important carpentry work.

To get an idea of ​​what they were like inside, In Colombres we will be able to access the Quinta de Guadalupe, as well as in the town hall, or in the Stone House, nowadays the Municipal House of Culture and Library.

The heritage complex of Colombres, one of the most interesting of all phenomenon of Indianos Architecture, justified that in one of these mansions, the Quinta de Guadalupe, the Indianos Archive Foundation and Emigration Museum was inaugurated in 1987, which works to preserve and expose the historical memory and the creations of the successive generations of emigrants, and which is a must. This villa, with a large interior patio and two floors of polychrome wooden arcades and Arab taste, was at the time the clearest symbol of the wealth and power of D. Iñigo Noriega. Its magnificent park is one of the best preserved gardens in Asturias, both in its design and in the exotic tree species it houses.

From Colombres there is an exit that goes to Bustio, below the church, and another to Villanueva, crossing the town. To the north, modern but uniform residential houses were built, which contrast with the opulence and individualism of the constructions of the Indians. And to the South, towards Villanueva, the houses are losing height, until they are whitewashed, one-story buildings, with a vague Andalusian appearance, in sharp contrast to the color and variety of the Indian palaces.

to 0,06 km Where is the Archivo de Indianos located? The house where the archive-museum is located was built by the immigrant to Mexico Iñigo Noriega Laso, who ...

to 0,10 km Capital of the municipality of Ribadedeva, this town could have become an important city if the intentions of its...

to 1,89 km La Cueva del Pindal, in the beautiful village of Pimiango, was in its own way an art center, then related to mystical and supernatural affairs. Their p ...

to 1,97 km Small coastal council located in the easternmost end of Asturias. The south of the council is surrounded by the impressive Sierra del Cuera, also ...

to 2,23 km The Deva River, until it reaches its mouth in the Cantabrian Sea, runs 62 kilometers. From his birth in the circus of Fuente Dé he begins to interfere ...