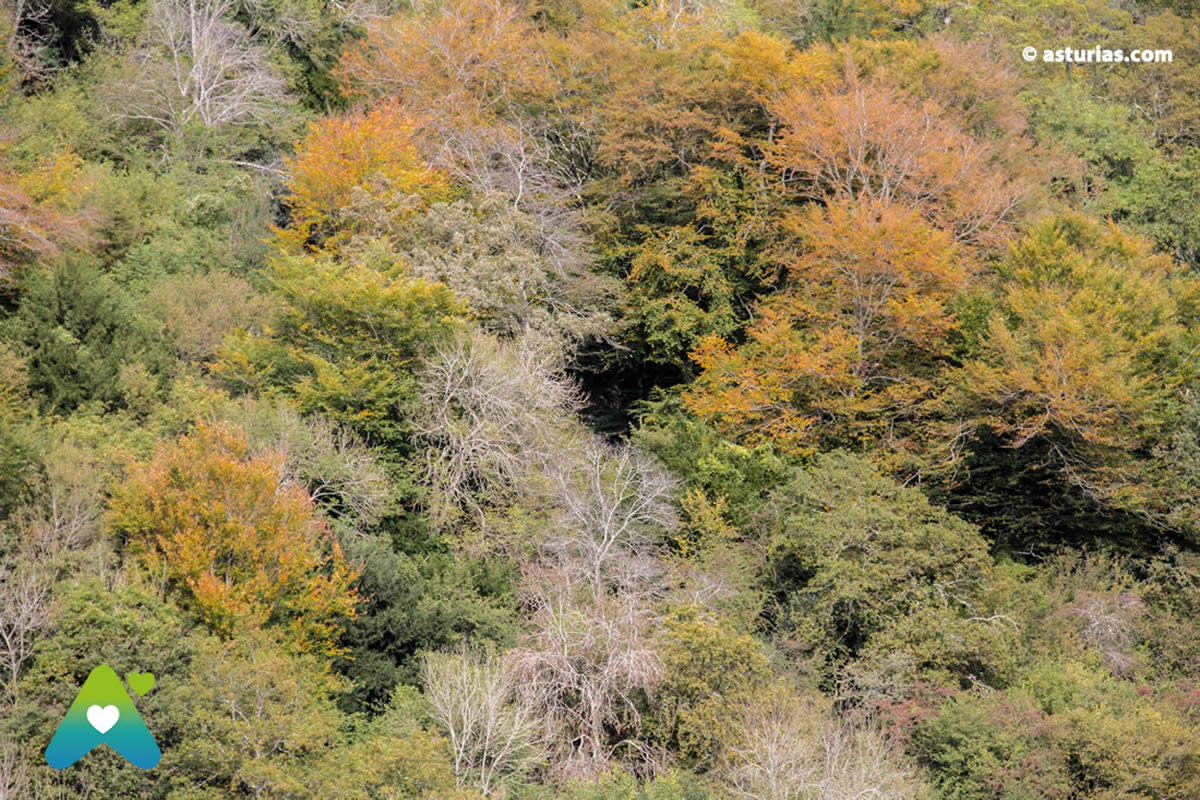 Route through the Magic Forest

Route through the Magic Forest

The low elevation at which it is located (about 200 meters of altitude) makes it the beech that grows at a lower altitude in the Iberian Peninsula and probably throughout Europe. This gives it even more personality and favors a late autumn within its domains, so we can visit it in its maximum splendor when the rest of the beech trees have already lost their leaves.

The excursion to La Biescona is simple and its purpose is also: it is about following the well-marked path that crosses the forest to experience firsthand one of the most beautiful natural spectacles in Asturias. Lovers of nature, photography, hiking and sports in general have in this scenario a lot of reasons to give free rein to their hobbies.

We are talking about a beautiful and unique forest, located on the north face of the Sierra del Sueve, very close to the Cantabrian Sea. The humidity of the coastline gives you a unique picture and a very rare ecosystem among beech forests.

Influenced by sea breezes, the forest is often hidden in mist. The magical name, with which many refer to it, is given by this circumstance and by others typical of its microclimate. La Biescona is a shady place in which there is no understory. Such is his leafy that the sun's rays do not reach the ground for much of the year. Because is free of weeds and grows everywhere a "magical" mantle of mosses, liverworts, fungi and lichens that clothe the rocks, logs and bark dislodged everywhere. The set offers a certain aspect of the equatorial jungle, to the point that it is a paradise for botanists that have certified the presence of ferns and tropical bryophytes (some of which are almost living fossils due to their enormous age). A very inappropriate lichen for these latitudes is the so-called Lobaria virens - perhaps the largest botanical relic of La Biescona-; too one of the most endangered ferns in the world's flora survives here, known as the Deer Tongue.

We see how it extends through the throat that forms Toya stream. It is not populated only by beech trees, too there are birch, hazelnut, ash, holly, yew and some oaks that grow above its normal height. It is always worth going into this forest and enjoying its denseness, the extraordinary shapes of the trees clinging to the rocks, the ground covered with leaves, the solitude ... The chirping of the birds will accompany us as we cross the sloping beech forest . We take it easy to take unforgettable photos. The size of some of the beeches is incredible, like the centennial beech nicknamed La fayona, undoubtedly the most photographed of the beech forest for its perimeter and impressive branches.

We intuit the fauna hidden from the forest like foxes, who find here many areas of refuge and breeding; hopefully a fallow deer will appear, we may find a cow from the Sueve cattle herd. The path becomes wet, muddy and slippery at times as we enter the Garganta de la Toya. We will cross the stream on several occasions, through areas where it is only a stream of water, but also through places where the channel is more alive. In the lower part of the beech forest we enter between high stone blocks and what appears to be a dry riverbed (loaded with water in the thaw). On occasion we dodge large fallen logs. The trail also holds traces of human activity, such as the ruins of the La Toya Mine, former iron extraction exploitation.

We can start the route from the popular Mirador del Fitu or about four kilometers before the viewpoint, at a stop on the left known as Potru's foot. This second option is a round trip, ascending the beech forest to the Bustacu sheepfold, to go back down the same path. If we do not want the logistics of leaving a vehicle at the beginning and another at the end of the route, this small car park is the ideal place to start and end the tour of the beech forest.

We can assure that It is a perfect route to discover with children because it constitutes in itself a whole nature classroom. The route through the beech forest will leave us speechless by the size of the beech trees and the impressive shapes of the branches. The best time of year to do the excursion is autumn for all trees will have an infinite range of color, from yellow to red.

We recommend doing the route accompanied by the guides of the Sueve Interpretation Center; They also make visits to the Church of Gobiendes, the historic center of Lastres, routes to Picu Pienzu ...

We recommend the option of facing the beech forest in descent from the Mirador del Fitu. Especially the guided and explanatory visit organized by the Sierre del Sueve Interpretation Center, located in the town of Gobiendes.

This alternative is ideal if you go with children. From the Mirador del Fitu, where we left the car, we will walk to the upper entrance of the beech forest, crossing sheepfolds and meadows on the ridges of the mountain range, with great panoramic views of the interior of Asturias, the Picos de Europa and the Cantabrian coast. Later we will enter and descend through the beech forest, from the beginning at the height of "Fayona" to the vicinity of the old La Toya mines, where a wide path starts that leads us to Pie de Potru, next to the old Casa bar Julia, where we will finish the route, already next to the AS-260 road. The center is responsible for transporting us to the Fitu to take our vehicle again.

The route is medium-low difficulty and about 4 hours long, with a drop of 130 meters up and 550 meters down.

to 0,33 km The Sierra del Sueve, just 4 km from the coast of Colunga, rises above sea level above 1.100 meters, specifically its maximum elevation XNUMX ...

to 1,56 km El Pozo de la Oración In the Cabrales town of Poo de Cabrales we find one of the best views of the Naranjo de Bulnes or Picu Urriellu. Com...

to 1,74 km At about 1.100 meters above sea level, the Mirador del Fito is written in capital letters; It is one of those rare places that allows a spectacular view ...

to 2,05 km It is a small coastal council bounded by the El Fito and Sueve mountain ranges to the south, and crossed by the Duesos river that seeks its mouth on the ...

to 2,06 km The Hotel de Caravia is strategically located between the sea and the mountains, it has comfortable double and single rooms, with views to the outside ...

to 2,07 km Our restaurant respects Asturian cuisine, proof of this is the membership of the most prestigious restaurant associations: Entrefogones y C ...

What to do in Asturias
What to see on the eastern coast of Asturias?
Colunga
Best hiking trails in Asturias
Walking routes Asturias