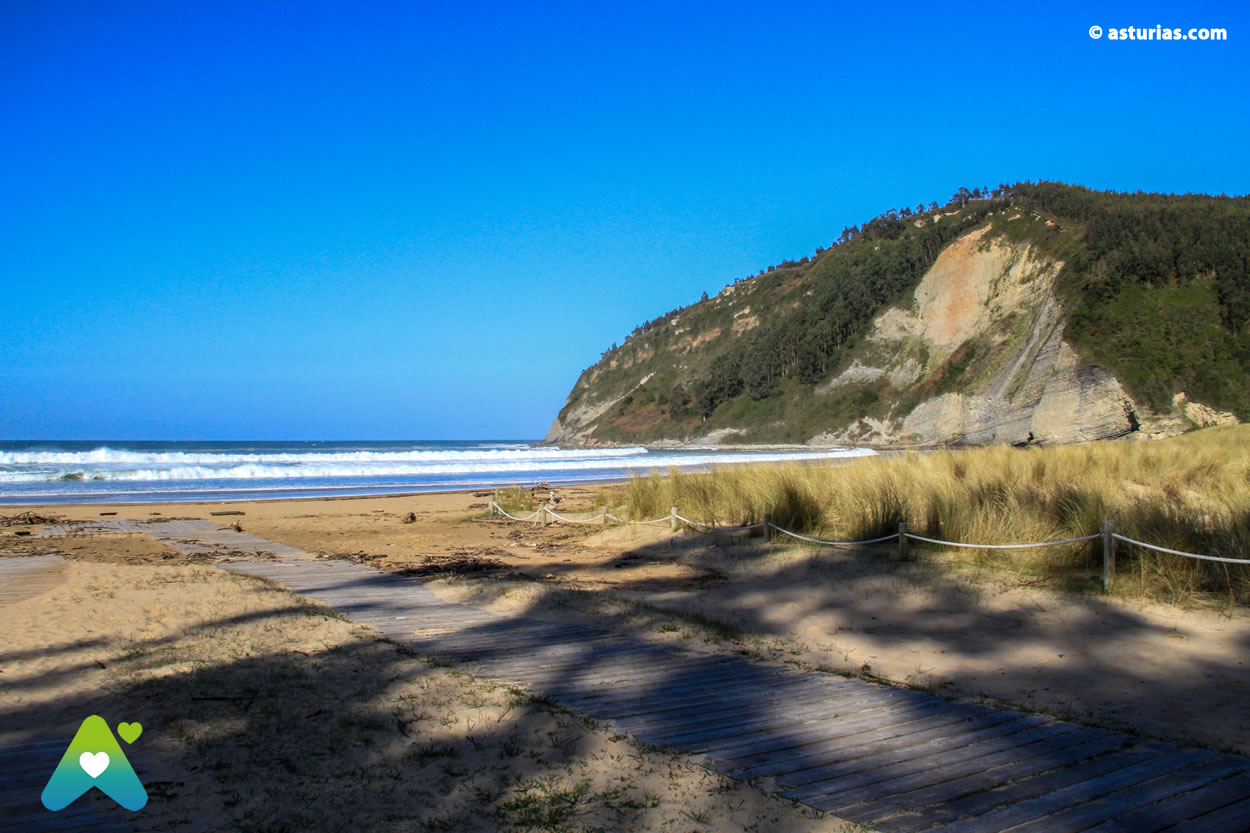 Beach of the Orient of Asturias. A minimum description that circulates through the network explains that Rodiles is a long beach of toasted sand that covers 1.000 meters. Behind, we find dunes set in a wide and leafy pine forest suitable for picnics and rest. It is located on the right bank of the mouth of the Villaviciosa estuary.

But we could extend a lot with other type of definitions that complete this first one and highlight the environmental values ​​of the beach, its geological age, the play of tides that are formed in its limits, the winds that cross it ... and a long etcetera that we will detail.

First, and if we go to Rodiles beach in the summer, we will see that it is about a popular beach, where the inhabitants of Villaviciosa and several councils in the center of the region come to cool off and sunbathe. In this case we can stay with its services: picnic area, kiosk, restaurants, camping, toilets, showers, telephones, changing rooms, waste bins, cleaning service, parking, danger signs, Red Cross post, lifeguards, nearby marina and Villaviciosa - Rodiles bus line.

But perhaps the most important thing to emphasize about this polysemic beach is the wild aspect that jumps out at first sight, no matter how crowded we see it in the summer months. The urban nature of the area is residential and far from the beach, so that nothing is seen in the immediate vicinity other than the sand, the dunes, the profiles of the cliffs, the meadows, the Villaviciosa estuary, the wide and leafy pine forest, bathers…

The dune system de Rodiles has a great botanical wealth. Recently efforts have been made to protect it by installing wooden walkways between the dunes to prevent visitors from walking on them and also to ensure that the disabled have better access to the seashore. Protection includes the repopulation of the dunes with their own vegetation.

Rodiles is also a stretch of coastline on the Jurassic Coast, one of the main formations of this geological age and an integral part of the nearby Jurassic Museum of Asturias. With rocks of marine origin, the most representative of the first half of the Jurassic. Thick rhythmic successions, formed by alternations of limestones and marls that come to surface in certain parts of the beach. The Rodiles Training It is very rich in organic matter and in ancient times came to generate oil. The remains of this one are appreciated in some fossils and in the fissures of the rocks. Its paleontological treasure was further increased in the 2001 year, when a spectacular giant squid arrived at its expense, a direct heir of the oldest life forms.

Bird's eye view Rodiles is part of a fluvial and marine lattice of some complexity. The estuary of Villaviciosa a total of 7 Kilometers is extended along the eastern part of the municipality, creating an irregular path that ends up giving the sea between the Puntal area and the beach of Rodiles. To the right of the estuary, the coast forms an enormous rasa, the rasa of Selorio. On the left, another one is called Les Mariñes. In the middle, the beach of Rodiles becomes low tide in one of the most extensive sandy areas of Asturias, because it extends through inlets, marshes and inland beaches of the estuary, turning the area into an unbeatable territory for watersports and fishing, both sporting and professional.

References to Rodiles abound in the environments surfers, considering it ideal for practicing this sport. In the internet forums it is said that it has a wave that forms to the west of the beach, in the area of ​​the mouth, a perfect wave to the left, strong, hollow.

Of the more than 200 beaches that flood the Asturian geography -345 kilometers of coastline-, perhaps the most appropriate for…

Rodiles is located on the eastern side of the estuary of the Villaviciosa estuary, 10,4 kilometers from the capital and close to the towns of Olivar and Selorio.

The access to the beach from Villaviciosa is done following the N-632 in the direction of Colunga until a detour indicated by Rodiles on the left. Take this road to Rodiles, where it ends. Once there, you can park the car at the first entrance of the beach, or along the interior walk to it. In the first case, the sand is directly accessed; in the others, you have to cross a plantation of eucalyptus and pine trees.

The western end of Rodiles communicates on the inside with the beach of Misiego, located in the delta. On the other side of the estuary is the Puntal beach.

to 0,11 km 1 · Rodiles Beach One of the best beaches in northern Spain for this sport. It offers different possibilities. At low tide, at the western tip ...

The estuary of Villaviciosa

to 1,40 km House with two floors and ground floor, restored in stone and wood, with a garden area equipped with a terrace and parking. In the middle of nature, 2 km from the ...

to 2,17 km Cobbled streets and low houses. There are also paths that do not lead anywhere in particular, perhaps to an unbeatable promontory to enjoy the ...

to 2,39 km Tranquility, fun, culture and sport in an unbeatable setting: the protected area of ​​the Partial Reserve of the Villaviciosa Estuary whose flow ...