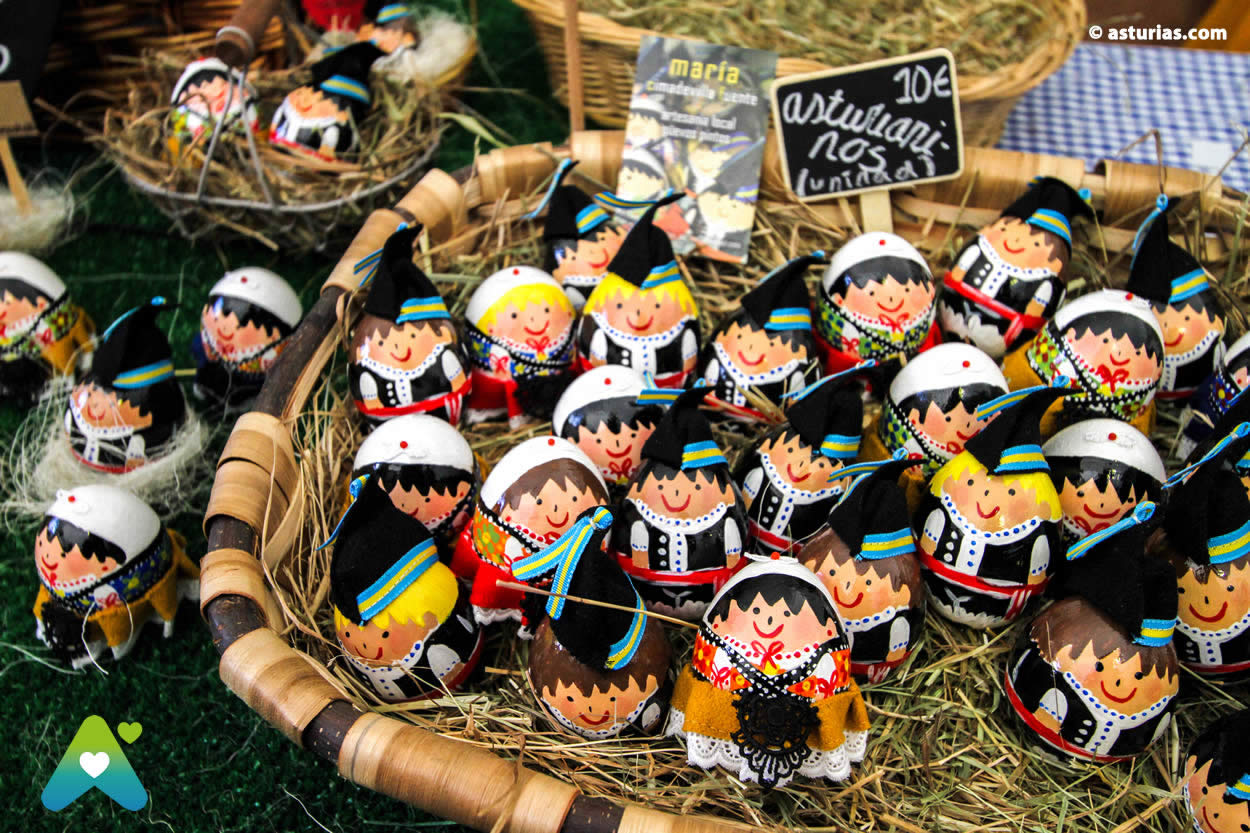 We are talking here about one of the most popular parties in the Holy Week in Asturias. Los Huevos Pintos, which is celebrated in the Asturian town of Pola de Siero, the Tuesday after Easter SundayIt is a bustling party, where good humor, cider and folklore of the land are wasted. Although there are no written documents that give certainty of its origin, it is one of the most important festivals of the Principality, and was declared of National Tourist Interest in 1968.

The Fiesta de los Huevos Pintos - which phonetically sounds loud and guttural: Güevos Pintos- It is one of the most popular and colorful festivals in Asturias. And it is for cultural and folkloric reasons, but also for artistic reasons.

Painting an egg is not a simple matter

In some, whole weeks are spent, working several hours a day. First the motive is drawn, the egg is cooked and, In hot to "hold" the color, apply the ink, watercolor, dye ... Then varnish so that the color lasts even if they are handled all the time.

En The Pola, the technique is clear and that, over the years, different ways of painting have been developed. Cooked they endure years and years, but there are those who prefer to empty them so that they are eternal. Only a few years ago, the reasons to draw They were traditional in most cases, with typically Asturian scenes. But they have evolved towards an amazing variety. There are eggs that have been painted the Guernica, Las Meninas of Velázquez or the romantic scenes of Gustav Klimt. Authentic works of art, very reliable reproductions in the shape of an egg.

Although they are also painted protagonists of children's series, Scenes of cult movies, characters of cinematographic sagas, Symbols regional, also universal, brands, logos ... They are tuned also the eggs with beads and accessories looking for a more innovative point that does not remain only in the shell. There are those who follow Pysanky style, and decorates them with beeswax and natural dyes, or who emphasizes the drawings with a lifelong rotring. And although the Chinese ink it is the most used, they are also painted gouache, with gouache, oil, watercolors, pen... Most of the time they wear on the back a caption, poetry or witty phrase. Because we are talking about aspirational eggs: they want to make us laugh, chat, think, even dream. 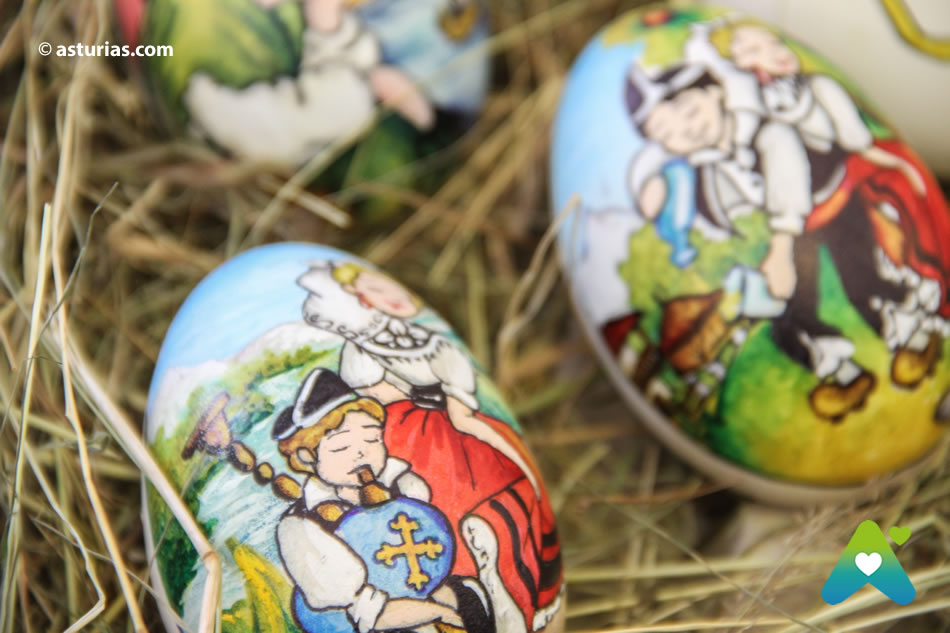 If we dedicate ourselves to contemplating them one by one, and in detail, we will fall prey to Stendhal syndrome, but to the beast, and the vertigo will take over us while we drunk through the streets of La Pola. This is the party of the Güevos Pintos, a powerful multicolored sensation that takes away iron and drama from the recently ended Holy Week. Easter Tuesdays are like that, they were once used for rejoicing, for spend jokes, to feel light and graceful after the resurrection of Our Lord. The egg is the beginning of a new life, that is why it comes to our hair at this time. But already before Christ there were painted eggs. Yes. We could rewind 60 thousand years back and we would find decorated ostrich eggs.

Undoubtedly, the Pintos Eggs are the Easter Eggs.

Its meaning is related to Lent and the prohibition of consuming certain foods, including eggs, which were accumulating in the houses where there were chickens. So at the end of Lent, the idea of ​​giving them to relatives and friends became popular. The custom of enriching and painting them possibly had a courtly origin.

And in La Pola (in Asturias also in Sama), eggs that have been previously hand painted are exhibited, sold and given away. He wake up a flea market popular for this purpose, to which thousands of pilgrims come from all over the world, and after admiring the eggs, they drink cider, parade in floats, dance, auction the ramu and enjoy themselves through the streets of Poles.

A very special moment of this party is the Blessing of the Güevos Pintos In the town hall square; from that moment runs the cider, the good gastronomy, the bagpipes and the party, culminating with a verbena that lasts until dawn.

In the eighteenth century This pilgrimage was already famous. His Majesty the King granted the City Council of Siero a regulation authorizing the Corporation to spend a large sum to defray the expenses of the great celebrations, both religious and profane.

In a chronicle of 1860, signed Protasio Sánchez Solís, we read: "Only Oviedo and Gijón took a hundred horse-drawn carriages and an impossible to describe animation to the famous pilgrimage of the Pinot Eggs."

The eggs were then cooked in the old Asturian kitchens and they painted themselves with soot from the same. The party was known by the nickname of "the Proud Eggs". The progress of chemistry, with the inventions of anilines, sharpened the ingenuity of the polesos who used them for the dyeing of eggs. Using toothpicks dipped in nitric acid, they wrote names, dedications, verses, and drew shields, flowers, etc. It was then when the name of Huevos Prietos changed to Huevos Pintos.

The tradition of Pinto Eggs in Asturias -although it has several centuries- is of uncertain origin. In Siero it has been transmitted orally, from generation to generation. They say that perhaps it is linked - it is only a hypothesis - to the people who came from Central Europe to work in the Siero and Langreo mines, where the first coal deposits were explored.

Wherever it came from, the tradition took a seat on a fluffy throne and has not yet risen.

to 9,68 km Tejeme we are Ana and Manuel, two Asturian friends, who one fine day decided to set up an online wool store. How did the idea come about? Well, one day, Ana, art historian and hobbyist ...

to 13,28 km The house where this charming rural hotel is located was built in the XNUMXth century and has an attached chapel, offering masses on request. It has a terrace and large gardens for ...

to 14,49 km The AC Hotel Gijón is located on Avenida de Oviedo, in a residential area near the center of Gijón and the El Corte Inglés shopping center. With Turkish bath and a fitness center ...

to 0,04 km The deep roots of its traditions, and the high associative fabric make Siero one of the areas where Asturiania is most pampered. The municipality also stands out for its agricultural tradition ...

to 0,10 km Any place is good for parties, but the people of Poles have chosen nature. A green island near the urban area, with forest included to be in the shade if the heat hits ...

The slaughter of the pig

to 3,61 km The pig was a divine animal, it was believed that it had fed Zeus himself. In Gaul, Obelix and company ate not only wild boar, but entire herds of pigs. The Celts, Germans and ...
See more things near here
Stainless steel work

Any place is good for the party, but the polesos have chosen nature. A green island near the old town ...

The deep roots of its traditions, and the high associative fabric make Siero one of the areas where it is most pampered ...

We break down the Asturias Festivities here according to their international, regional, regional gastronomic tourist interest, ...

Festivals of Regional Gastronomic Interest in Asturias. The declaration of tourist interest assumes that the party ...

Regarding religious celebrations, Avilés takes the palm and adds seven brotherhoods with their respective ...