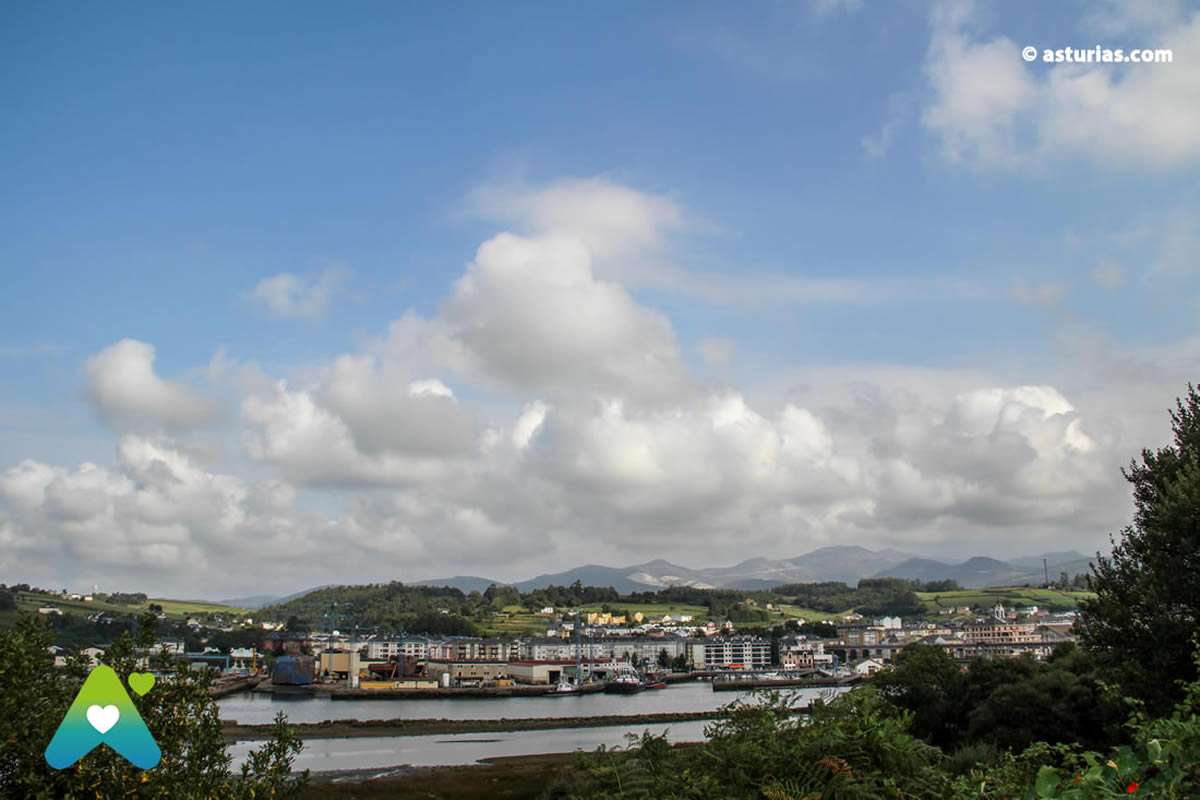 Navia is one of the most populated and dynamic Asturian towns, one of the ones with the greatest mercantile, industrial and tourist life of the Principality. With its 6.000 inhabitants, it could be said that it is the most populated nucleus of the Asturian west coast, besides the capital of a municipality with numerous attractions; many of them unpublished for the tourist.

Navia lives immersed in constant activity thanks to the push of the dairy industry, its shipyards, one of the most efficient pulp mills in Europe, without forgetting its extensive agriculture, fishing, tourism or being an obligatory stop on the Camino de Santiago. All this makes the town a prosperous place and uncommon among Asturian towns, more accustomed to the economic dependence of a single sector. Trade is also strongly established. A walk through its streets is enough to verify that Navia is the nerve center of the entire region.

Navia is the name by which the homonymous river is called, whose place name is of pre-Roman origin and corresponds to one of the main Celtic deities, associated with the cult of the waters. The human presence is abundant from the XNUMXth century BC. C., at which time the first remains of Celtic cultures are dated. The Navia River was then the border between Albiones (Galician tribes) and Asturians. The abundant amount of gold in its waters motivated a stable settlement of the Romans. The town reached some relevance in later centuries due to the development of the fishing sector and maritime traffic. In the XNUMXth century the walled enclosure was built to defend against the corsair attacks that penetrated through the estuary to the very core. The wall was demolished in the mid-nineteenth century due to the urbanization impulse, fishing regained its prominence and the Indian capitals were invested in the construction of schools and roads. At the beginning of the XNUMXth century, these same capitals favored the planned expansion of the town and the growth of residential areas with elegant buildings. In the middle of that same century, a generalized take-off of agriculture, industry and services took place.

What to see and do in Navia?

The town, which sits on the right bank of the estuary, has been gaining ground to it and its marshes. Remnants of the medieval layout coexist in the urban area along with others inherited from the nineteenth-century expansion and the new neighborhoods of the last decades. The architectural beauty of the House of the Marquis of Santa Cruz and the House of Coaña, both from the seventeenth century. The Parish Church of Our Lady of La Barca It is in the neo-gothic style, from the end of the XNUMXth century. In the twentieth century several eclectic buildings were erected, such as those in the surroundings of the "gardens", the Arias Palace o the Casino itself (built in 1922 by the Indians). The oldest streets in the town, which still retain great charm and character are: Las Armas, San Francisco, Hospital, Real and Hornos. The remains of medieval wall, of which a small part is preserved, can be seen on Mariano Luiña street.

We approach the port naveto, where boats of all kinds coexist: from the typical fishing boats, to the large cargo ships; going through the medium size of fishing boats, sailboats and yachts or tugboats. This is where a large part of Navia's atmosphere is concentrated, since the surroundings of the port itself are well stocked with taverns and cider houses.

Parallel to the estuary (which is navigable for 4 kilometers, and where the famous Swimming Descent has been celebrated since 1958), there is a beautiful boardwalk leading to the little navia beach (360 meters). In its environment there is a large recreational area with a lush and bucolic pine forest that invites us to rest under its shade. The magic of the site is completed with the small lake «Vega de Arenas».

On the outskirts of the town is also located Campoamor Park, dedicated to the great local poet and politician Don Ramón de Campoamor (1817-1901).

to 3,30 km History of Castro de Coaña Known as the Castrillón, from there the passage of the Navia estuary was monitored and defended. The Roman conquest made it ...

to 4,48 km From Puerto de Vega and from the town of Frejulfe there is easy road access. The beach is very inviting, and its unusual toasted sand makes ...

to 6,72 km The collection begins in the closed patio with machines and utensils belonging to the canning factory (boiler, pails, canning presses, etc.), ...

to 6,82 km The first impression you have when you arrive in Puerto de Vega is pleasant above all else. When we arrive our spirit is infected with the imma ...

to 8,81 km Located in the Asturian mountains, it has impressive landscapes without leaving the walls of the house, but at the same time it is located 20 ...

to 8,87 km There are 20 kilometers of route between Barayo beach and the town of Navia: PR-AS 293. The path is marked and signposted at all times, so...

What to see and visit in Asturias
What to see on the western coast of Asturias?