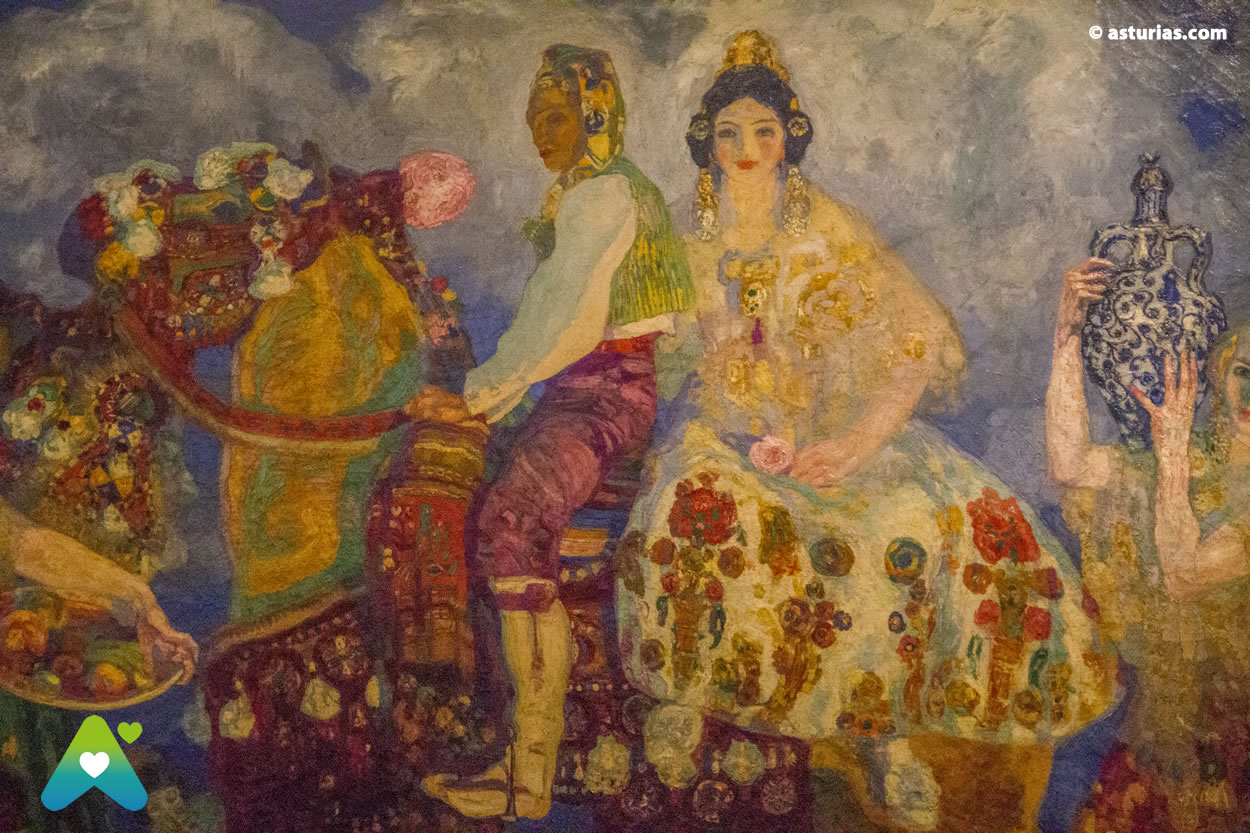 The best art collection in Asturias

The best art collection in Asturias

The Museum, inaugurated in May 1980, is located installed in three buildings in the old quarter of Oviedo: the Palacio de Velarde, from the XNUMXth century, to which a XNUMXth-century construction is attached, and the Casa de Oviedo-Portal, from the XNUMXth century. The Museum currently has a collection of between 8 and 10.000 inventoried pieces, although only between 350-400 are actually exhibited to the public. It contains paintings by Spanish artists - notably Asturians - and foreigners (highlighting Italian and Flemish painting), as well as sculptures, photographs, and glass and earthenware objects.

Opened in 1980 and dependent on the Principality, the museum occupies two historic buildings: the sumptuous Velarde Palace, one of the most important in Asturias, was built in 1767 by the great Asturian architect Manuel Reguera González for Mr. Pedro Velarde Calderón y Prada, city councilor, and the House-Palace built in 1860 by D. Fernando de Oviedo-Portal.

In the courtyard of the palace there are large-format works corresponding to Asturian and Spanish painters from the late nineteenth and first half of the twentieth centuries. The large canvas «After a strike», by the Asturian José Uría, an important work on social themes, is striking in this set. One of the rooms attached to the patio is dedicated monographically to the Asturian painter José Ramón Zaragoza. There you can admire the huge triptych "Myth of Prometheus", ascribed to the post-impressionist currents.

In this lower room there is also the temporary exhibition hall of the museum and the rest room, for visitors. Through this you can access the garden, open space where a small set of contemporary sculptures are exhibited.

Works until the 19th century

On the first floor of the palace are exposed permanently works ranging from the Middle Ages to the nineteenth century.

A space has been set aside for the exhibition of flamenco renaissance works. Here stands out the splendid Triptych by D. Alvaro de Carreño, of the Master of the Legend of the Magdalena, dated around 1520. Other important panels correspond to the Master of the female half figures, Jan Van Dornicke, Ambrosius Benson and Marcelus Coffermans.

The "Altarpiece of the Santos Juanes", of the Master of Cubells, of Catalan school, and the "Altarpiece of the Virgin" and saints, of the Mallorcan Rafael Moger. Next to these, today outstanding pieces of the Spanish-Flemish world made by Jaime Huguet, a culminating figure of the style in the Catalan field and Fernando Gallego, the most characteristic painter of the trend in the Castilian-Leon kingdom.

The exhibition continues with significant Baroque examples of Rubens and a superb "Vase" by Jan Brueghel de Velours.

In the galleries of the patio, works from the XNUMXth and XNUMXth centuries from Spanish and European schools have been installed. They especially attract two pairs of vases from Arellano and Yepes, from the mid-XNUMXth century, and the paintings of the Spaniard Miguel Jacinto Meléndez, painter of King Felipe V and an excellent epilogue of the Madrid baroque school, of which a pair of royal portraits is shown, the superb Portrait of the Marqués de Vadillo and an Immaculate Conception. The nephew of this painter, Luis Meléndez, the capital figure of XNUMXth century Spanish painting, is represented with an impressive set of seven still lifes and a portrait.

The central palace on the second floor, valued by a beautiful gallery open to the patio, welcomes a selection of the work of the most famous and popular Asturian painters: Evaristo Valle and Nicanor Piñole. Both carried out the best of their work in the first half of the 36th century. Its representation in the Museum, surprisingly rich in number and quality, reaches 36 oil paintings, two watercolors and one drawing in Valle's case, and 39 oil paintings and XNUMX works on paper in Piñole's case, including drawings, watercolors and pastels. Valle's work, linked to post-impressionist trends, offers, through his great mastery, an original worldview of the people and land of Asturias. For its part, Pinole, artist of academic training, was one of the painters who together with Valle contributed to the modernization of Asturian art.

Works of the 19th century

There are also a good sample of XNUMXth century Valencian painting, notably enriched with the incorporation of nine oil paintings by Joaquín Sorolla, some of the highest quality such as "Transporting the grape" or "Running on the beach." Ignacio Pinazo, Navarro Llorens and Jose Mongrell are also represented. And one selection of works linked to Spanish modernism. The great work «Campesinos de Gandía», by Anglada Camarasa, the «Self-portrait», by Darío de Regoyos from Rio de Janeiro, and works by Casas, Santiago Rusiñol, Ricardo Baroja, Sotomayor, Manuel Benedito, Eduardo Chicharro, Julio Romero de Torres and Joaquin are surprising I looked.

It should be noted in turn the splendid collection of glass and earthenware, with more than 2.500 pieces. Almost all of the Spanish factories of the nineteenth and twentieth centuries are represented, as well as warehouses in Germany, Belgium, France, England and Portugal.

to 0,08 km Now, with the beginning of the new millennium and the thorough cleaning of the cathedral surface, its rejuvenated appearance shows more clearly its magnificent ...

to 0,08 km These 10 corners are interesting places that deserve a visit if you are in Asturias, yes, they are not in order of importance or relevance, you can ...

to 0,08 km The recipe that we present is a recipe by the chef Juanjo Cima. At present, it is the benchmark in cachopos recipes, since its restaurant ...

to 0,09 km It is worth coating a couple of steaks with ham and cheese inside it does not seem very original. But in Asturias they turn it into slow food, into pleasure, into a ...

to 0,09 km With regard to religious celebrations, Avilés takes the cake and adds seven brotherhoods with their respective processional steps that go through ...