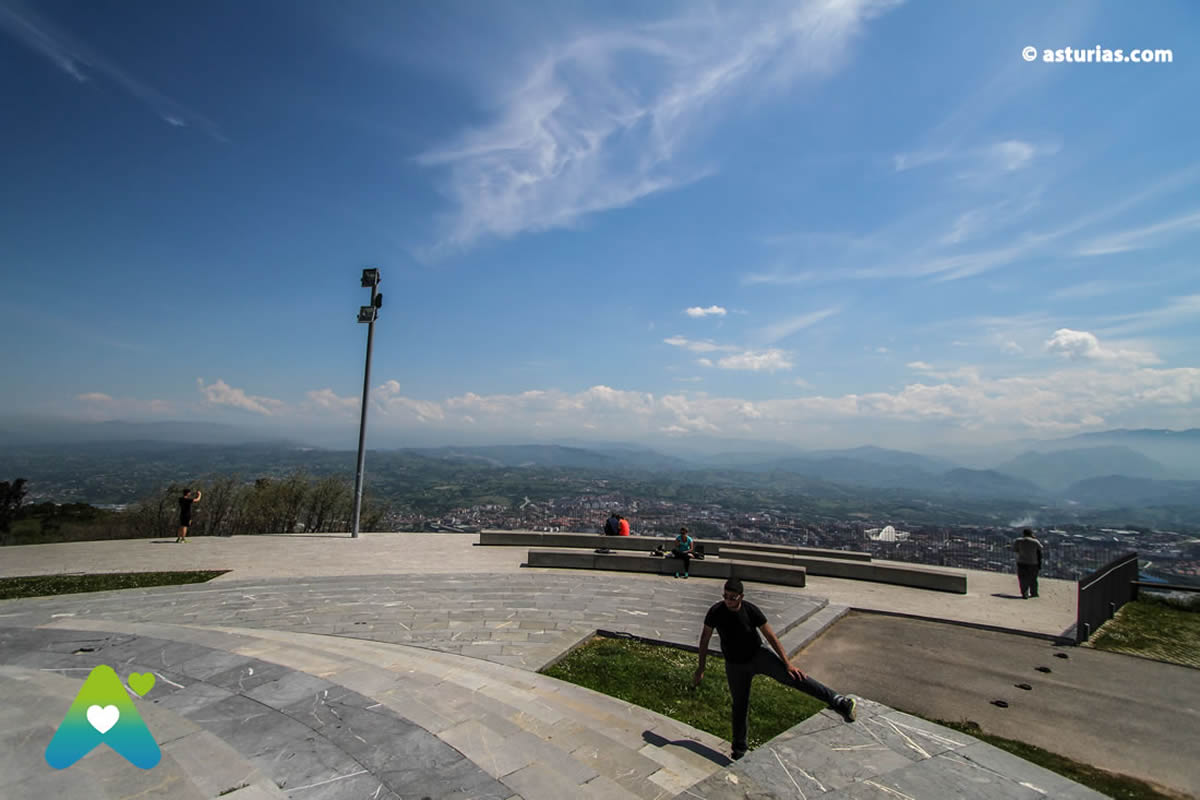 Oviedo at your feet

Oviedo at your feet

Having Oviedo at your feet is a real sensation that we experience from the top of Mount Naranco. A rounded hill of 636 meters of altitude and more than 30.000 square meters of open and natural space that crowns the Asturian capital and that offers us its best panoramic.

For the ovetenses the Naranco is like the Casa de Campo for the locals, Collserola for the locals or the mount Igueldo for the donostiarras. A space linked intimately to the life of citizens, that goes to its slopes to enjoy the outdoors, recreate its heritage or perform sports activities such as hiking or cycling.

The slopes of the Naranco are ideal for rewarding efforts: they are used for walking, training and competition. Throughout the year there are cycle tourism concentrations that aim to reach the top. The top of Naranco also welcomes those professional cyclists who are capable of taking down an entire squad to succeed alone. A short but very hard climb, which José Manuel Fuente made known for the first time in La Vuelta Ciclista in 1974.

· What to see in Mount Naranco?

The landscape in this environment unites a number of attractions: Finnish track, paths for hiking, horseback riding clubs, recreational areas, cider houses and Monuments. The two jewels of pre-Romanesque art in Oviedo: Santa María del Naranco and San Miguel de Lillo They are on their way to the top, giving this mountain the indelible hallmarks of the Asturian kingdom and its legendary status. The Naranco appears in the universal history of art with capital letters thanks to these two monuments, declared a World Heritage Site by UNESCO. Few mountains boast such wonders. They are 4 kilometers from the urban area. 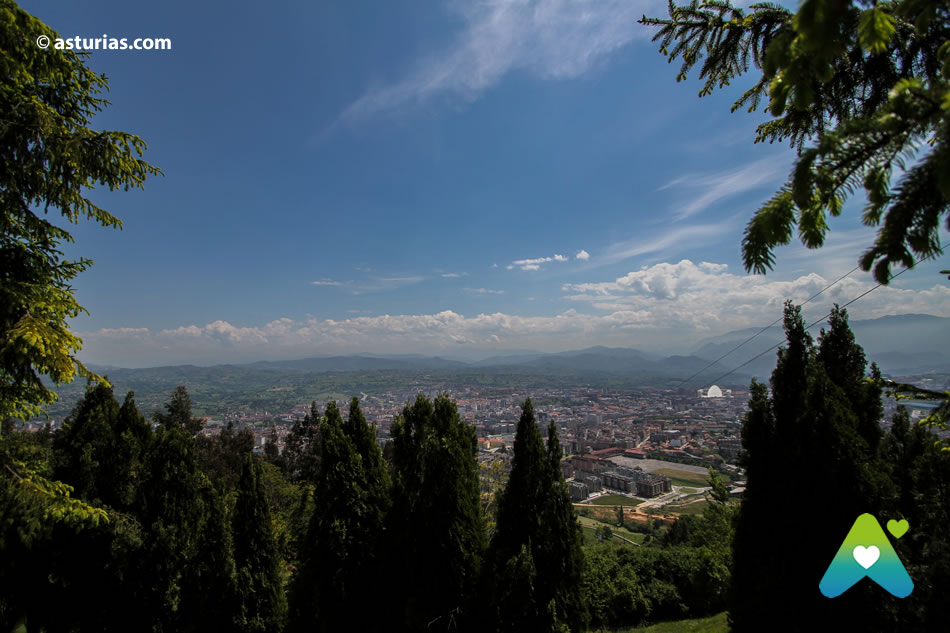 The most indigenous architecture of Asturias loses its roots more than a thousand years ago. Traces of the court in ...

From above everything is dominated an extraordinary aerial view of the city of Oviedo and almost the entire municipality, as well as those of Llanera and Las Regueras. If the day is clear we can enjoy an exceptional view and of more scope, reaching a glimpse of much of the central region of Asturias. 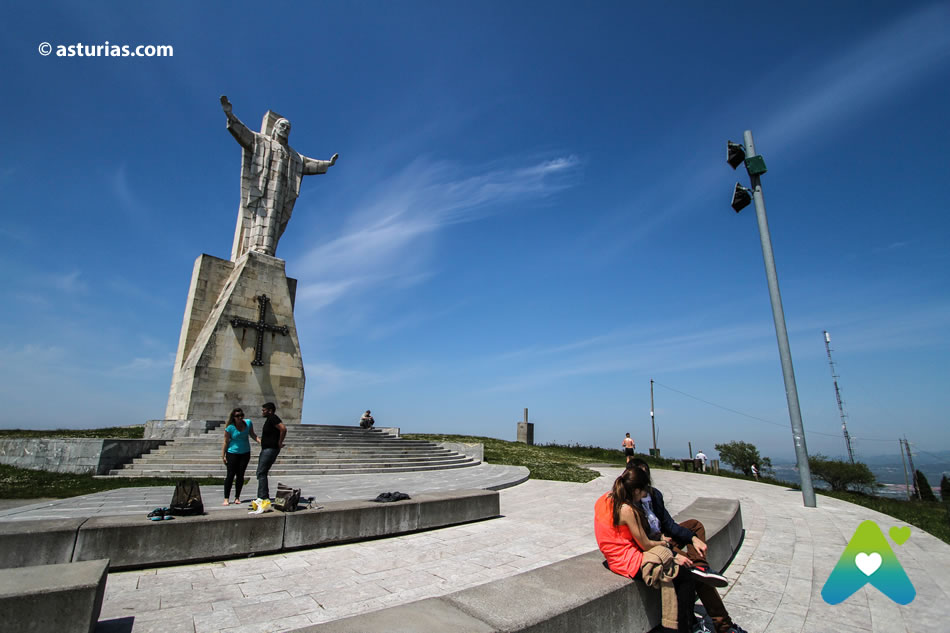 The superb monument of Sacred heart it seems to invite the delight of that vast landscape that mixes, in an unusual way, the most orderly urbanity with the abrupt mountain nature. The Sierra del Aramo, in front, crowns the closest altitudes of the city.

The figure of Jesus, symbolically embracing and protecting the city of Oviedo, It is usually a sacred goal for many walkers who from San Miguel de Lillo, ascending a steep but beautiful path, they pass by the Fountain of the Shepherds, where they quench their thirst with the cleanest and freshest water in the city.

With the car already in the streets of Oviedo, we must look for the signs that mark the path to Mount Naranco. The route to follow passes through the avenue of the Monuments, which slowly climbs the skirt of the mountain, between a residential area –Ciudad Naranco– where modern and magnificent constructions abound

As soon as houses begin to be scarce, Mount Naranco uncovers all its beauty. Among the trees appears the great building of the Asturian Center and its adjacent facilities, somewhat set back from the road. And without further ado up to the top, where the authentic viewpoint of the city is. On the nearby Picu del Paisano, we see the imposing statue of the Sacred Heart.

From the center of Oviedo to the Sagrado Corazón can be reached on foot in just over an hour and a half. They are about 16 kilometers with an accumulated unevenness of 770 m. going up. We can get out of the Tomas Purification Park in the Vallobín neighborhood. At the top of it there is a path to the left that will take us comfortably to the town of ules. Here we start a section by road to the upper part near Brañes. We turn right to take the trails that will take us quickly to the top of the llamaya and we crown the mount.

to 0,84 km These constructions constitute the most important testimony of the historical roots of the Kingdom of Asturias, preserving from this legacy twelve temples...

to 1,01 km In Asturias there are 14 buildings with a lesser or greater degree of conservation, mainly in the center of the region. And in Monte del Naranco, where ...

to 2,64 km The Room Mate Marcos is installed in a central area of ​​the capital of Oviedo, about 5 minutes walk from the Cathedral of Oviedo, the Fontán market or ...

to 2,66 km The Eurostars Hotel de la Reconquista is an emblematic hotel of the city of Oviedo, it is not in vain that the winners of the P ...

to 2,75 km It is located in a busy and central area in the current city, on the street with the same name, Foncalada (from the Latin fonte incalata), but in its...

A vacation in Asturias

to 2,86 km Asturias is a good destination for a small winter vacation. Despite the cold that is presumed at this time, the attractions are many p ...