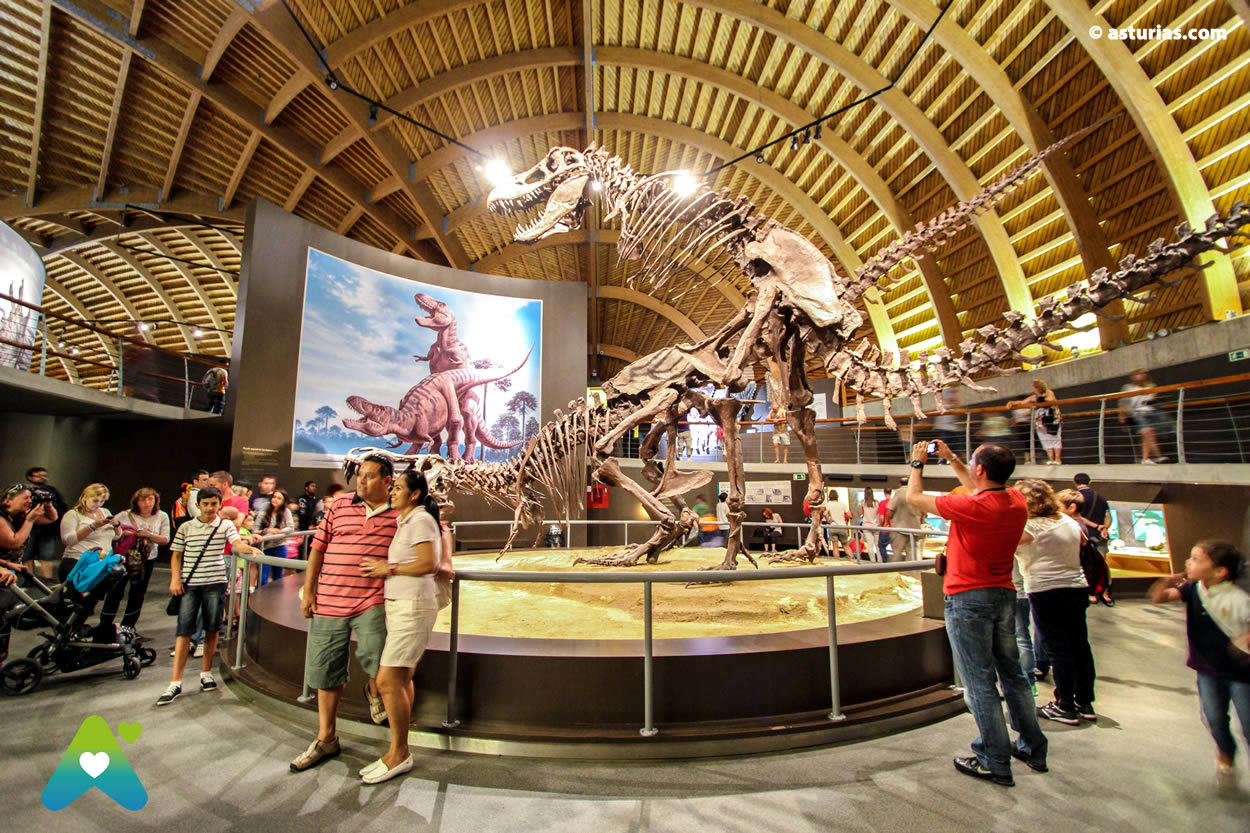 In a privileged place on the coast of Asturias a few meters above sea level, is located the Jurassic Museum of Asturias (MUJA), a unique museum that, in the shape of a large dinosaur footprint, houses one of the most complete and educational exhibitions in the world about these extraordinary reptiles.
The Muja shows life from its beginnings to the appearance of the human being and offers extensive information on the different aspects of the life of dinosaurs, through the tracks that today are preserved on the Asturian coast that goes from Gijón to Ribadesella.

The Jurassic Museum of Asturias (MUJA) It is located in the so-called Rasa de San Telmo, in the council of Colunga, halfway between the capital of the council and the town of Lastres, with a sloping access that starts from the AS-257. From this promontory there are Magnificent views of the Asturian eastern coast, and the museum becomes an omnipresent viewpoint of the Jurassic landscape at its feet and that it has decided to catalog. So the first merit of the museum is found from this position, outside, contemplating the maritime panorama that opens up to our eyes.

Its singular architecture in the form of a tridactyl footprint He grants his second merit and opens many more expectations. Once inside we contrasted that inside It is equally spectacular, with large and open spaces in which an important era in the life of the planet Earth has its place: the Mesozoic, including the Jurassic period in which the dinosaurs lived. We walk along its elevated walkways and we are captivated by the replicas (a score) that fill the space. The central scene represents a couple of Tyrannosaurus copulating. They exceed 12 meters in height, and if they had meat they would exceed 10 tons of weight.

We find other replicas bombastic, like that of the Gigantosaurus, the largest of the known carnivorous dinosaurs, belonging to the Argentine fauna. We also see a Deynonichus (Terrible Claw), a Jurassic animal related to birds and a paradigm of predators.

These colossi are an analogy to the clearness of the span of the building, whose total surface between the first floor, the basement and the basement is close to the 5.000 square meters. The imprint of the dinosaur it is also reflected in the three immense elliptical vaults that make the ceiling of the installation. A huge claw to trap us inside for a while. 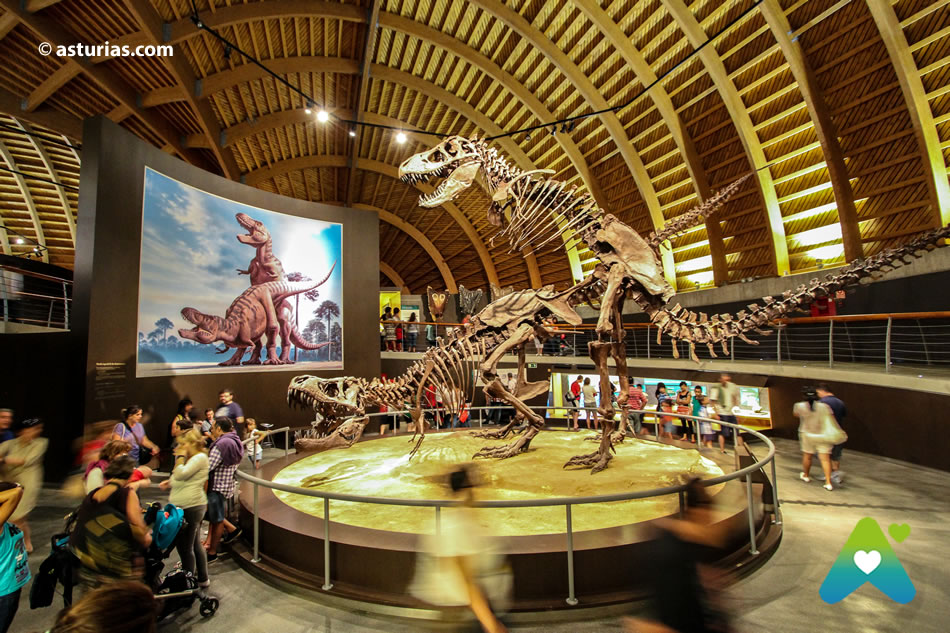 What do we see in the MUJA?

The ground floor and the first floor are distributed in accordance with the aforementioned vaults in three large areas according to the temporal divisions of the Mesozoic (Cretaceous, Jurassic and Triassic). In the basement, more than 400 tonnes of fossils from the Jurassic coast are stored, waiting for an adequate cataloging and subsequent exhibition in the museum. On the first floor we find space for temporary exhibitions room, waiting room, public services, private spaces for administration and direction of the Museum, general stores and workshops and general facilities of the building. As well as museum funds, library, laboratory, research and restoration workshop to work with paleontological material. On the ground floor we find the lobby, audiovisual room and in it, the permanent exhibition room begins, with graphic, textual and fossil references to the time before the Mesozoic, the Mesozoic itself and the Jurassic in particular. In the back of this floor there is an assembly hall with capacity for one hundred people. This room is designed to host various functions in the scientific and informative trajectory of the MUJA: film screening in two and three dimensions, multimedia, slide projection, transparencies and complete accessories to teach courses, seminars or round tables.

In terms of contents It must be said that time is the great thread of the MUJA.
A temporal sequence that covers the three major periods of the Mesozoic: Triassic (250-205 million years before our era), Jurassic (205-140 million years) and Cretaceous (140-65 million years). There is a special dedication to the different dinosaur faunas during the Mesozoic and to the transformations of European geography throughout this era, with a module dedicated to explaining the geological history of Asturias. A period, the Asturian, which contains portions of the last 600 million years of life on Earth. Emphasis will be placed on the Jurassic littoral, from the sea levels of the Gijón formation to the channels represented in the Lastres formation. On the other hand, the time elapsed since the beginning of life on Earth (3.500-3.800 million years) is exposed in a small introductory module. With all this, the aim is to make clear the magnitude of geological time and the dynamics of the evolution of living organisms. The events after the Mesozoic (Tertiary and Quaternary, last 65 million years) also have a place. The idea is to illustrate the factors that have determined the current composition of life on the planet.

The foundational collection del MUJA is composed of some 8.000 specimens of fossils exclusively from the Asturian Jurassic. The sample is divided into four main nuclei: dinosaur footprints (some 150 tracks taken from the coast of the region), remains of vertebrates (200 remains of dinosaurs, crocodiles, turtles and fish), vegetable fossils (103 samples of plant remains and 11 fragments of large trunks) and invertebrate elements (more than 6.000 specimens of ammonoids and brachiopods). The rhythm of growth of the pieces that make up the collection is presumed high. To date, large specimens and more than a thousand small ones have grown annually in an average of 30. The appearance of the MUJA, in its research and academic aspect, with personnel and its own infrastructure for the prospections, as claimed by the experts, suggests that the findings will increase without any doubt.

The Jurassic coast of Asturias For several years now, he had been demanding a museum of this type, a large and attractive building that would give true value to the findings that had continued for years. The researchers also came claiming more means and planning in the study; assured that with official support the title of best Jurassic site in Europe. For now, the Jurassic Coast is waiting for the distinctive UNESCO World Heritage Site.

to 0,01 km 1 MUJA Jurassic Museum of Asturias In the center open days are organized all year round, workshops on weekends and holidays, they celebrate ...

to 0,88 km Our restaurant is located right in front of La Griega Beach. We have 2 dining rooms, a small one for 45 people that we use during the winter ...

to 1,17 km La Griega is in the shape of a delta and is about 800 meters long. Apart from its great beauty, La Griega is an open-air museum. In it we find a trace ...

to 1,38 km Mostly narrow and narrow streets, paved like those of before and always sloping, are the thousand and one small arteries through which it passes ...

to 1,41 km Other classifications and rankings are possible, we could make several lists with more surprising towns, loaded with history and with multiple alicien ...

to 1,62 km Villaviciosa Beaches With convenient access to take your friend: · Tazones Beach The main road leads right into the port, it is accessed ...