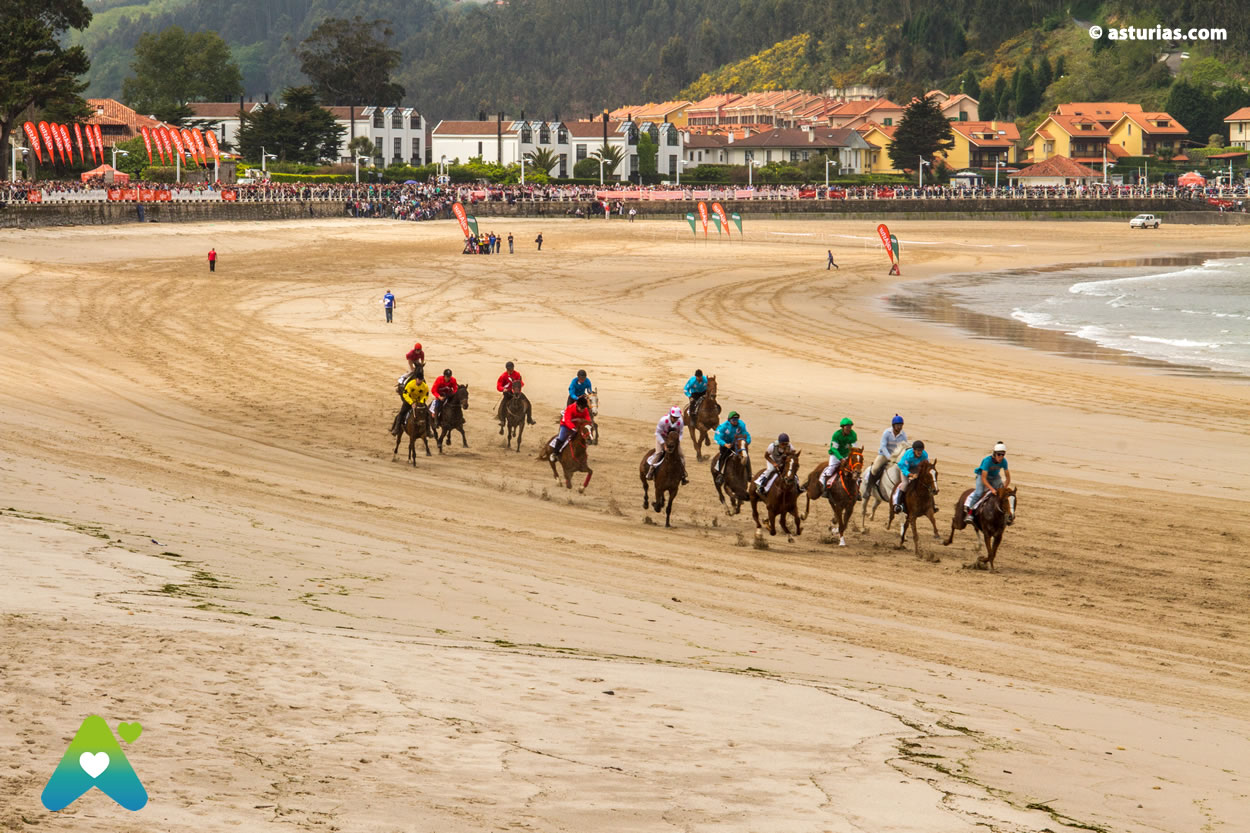 Good Friday and Saturday mornings, the riosellana beach of Santa Marina it becomes an improvised and populous racetrack. Thousands of people congregate on the wall to attend the the only equine event in the North of Spain that takes place in a sandy area. The unique setting of this urban beach, with the rolling sea and the horizon as a backdrop, predisposes for these unusual races that add a new dimension to equestrian competitions. In 2022 it is April 15 and 16.

Some argue that in the local port, there by the eighteenth century, in the heat of boom of the maritime commerce, contraband activities proliferated that eluded the port controls on the backs of black horses to be confused at night.

In the year 1989 local horse enthusiasts, remembering these stories of smugglers, began to place bets on which would be the fastest horse on the Rio de Janeiro beach of Santa Marina. For this they took advantage of the strip of wet sand released during low tide. Already in its origins, the unusual sports frame, denoted an extraordinary beauty and laid the foundations for a larger show that was forged over the years.

Nowadays, after almost 20 years of filming during which the participation was increased with the competition of more riders, amazons and local blocks, Asturian clubs and other bordering communities, the test has finally acquired international dyes, as they have already run on the Santa Marina beach foreign equestrian clubs, mainly from France and Portugal.

Also the race has been professionalized, because after years of being an exclusive test for the fans to show their skills, now the jockeys are professionals and purebred horses competing on Good Friday in a scoring event for the Spanish championship.

The Rio de Janeiro races have the objective of becoming an unmissable event on the equestrian calendar, following in the wake of other races with more roots in time, such as the Sanlucar de Barrameda with which it has many similarities. The organizers of the Andalusian contest have attended Ribadesella in order to collaborate and provide their knowledge.

In 2018 they receive the distinction of «Festival of Regional Tourist Interest», since they are the only horse races that, in addition to competing on a natural beach, include turns in their routes and has a seafront elevated on the beach that allows the public a perfect view of the entire route.

There are few beaches in the Cantabrian Sea that draw such a spectacular panorama and that are surrounded by such a landscape ...

to 0,20 km We also observe how the river Sella, which flows into the same beach, creates one of the most beautiful estuaries in Asturias. The estuary outlines a great curve and is ...

to 0,21 km Located on the beachfront, residential area of ​​Ribadesella, Hotel Don Pepe has absolutely privileged views of its surroundings, ...

to 0,31 km El Puente del Pilar is a small hostel full of charm, ideal for those who, being able to choose any hotel, mainly value the warm and ...

to 0,34 km Our vacation home is for full rental, with capacity for 8 guests. It is located next to the Malecón, a very quiet area in the beautiful local...

to 0,40 km At our feet stretches the beach of Santa Marina. It is more than just a beach, it combines heritage, history, tourism, society and ecology. ...

to 0,41 km Surf Camp Ribadesella as a surf school in Asturias offers you the possibility of signing up for group surf courses or receiving private lessons ...

The Cliffs of Hell