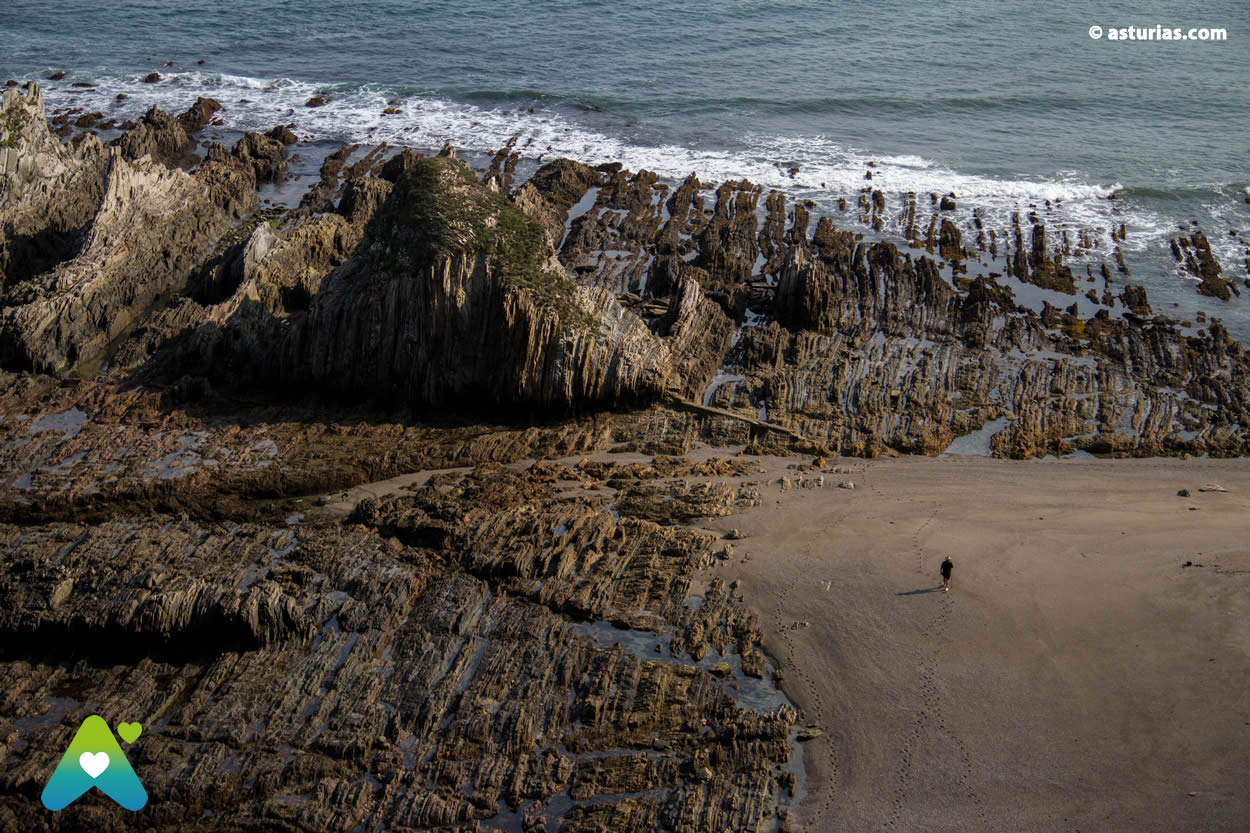 The most photographed beach

The most photographed beach

The beaches of the municipality of Cudillero, Like this Gueirúa, they have a very special charm. Being at the foot of the cliff, with an access that requires a certain walk, more virgins are preserved if possible. The scarce affluence converts these beaches into a refuge of nature. Traditionally they have been the headquarters of cetáreas and fishermen. The only alterations in sight are those of slow time and erosion.

The beach of Gueirúa is light and silence, a breathtaking panorama that changes tone and atmosphere very frequently. It can become a haunting landscape of sharp rocks, like tusks emerging from the ocean, or a wonder of nature that overwhelms by being majestic.

At times it can be gloomy and telluric under the influence of a temporary northern, as in a natural setting of Game of Thrones. Against the light it appears between a fog kind more own The Lord of the rings. And we can admire her with radiant sun, blue sky and clear, being fascinating all its corners as in a happy ending.

And while the cinema has not yet noticed her - it will sooner or later -, the world of photography is already far ahead of her. In addition to geologists, Biologists, fishermen, shellfish, scuba divers, Gueirúa has been frequented for years by an entourage of photographers They try to portray all their angles in search of the perfect image. In fact we speak of an archifamoso place for any landscape photographer worth his salt. The photos of this beach Picturesque and magical decorate calendars, magazines and virtual galleries. It is present in photography forums night, dawn and dusk, in discussion groups of canonists and nikonists ...

But do a good photo This enclave is not a simple matter, it requires the approval of a community of experts. You have to justify the idea you are pursuing, the framing and composition, the lens used, the exposure… "perhaps by sweeping it forward you would bring out more details from the background," says one fan. There are those who remain stationed in a corner waiting for the sunset, and those who patiently seek the light of the full moon. Although there are many who think that the best photo of this beach is at dawn, because that is when the sun appears behind the sharp rocks. 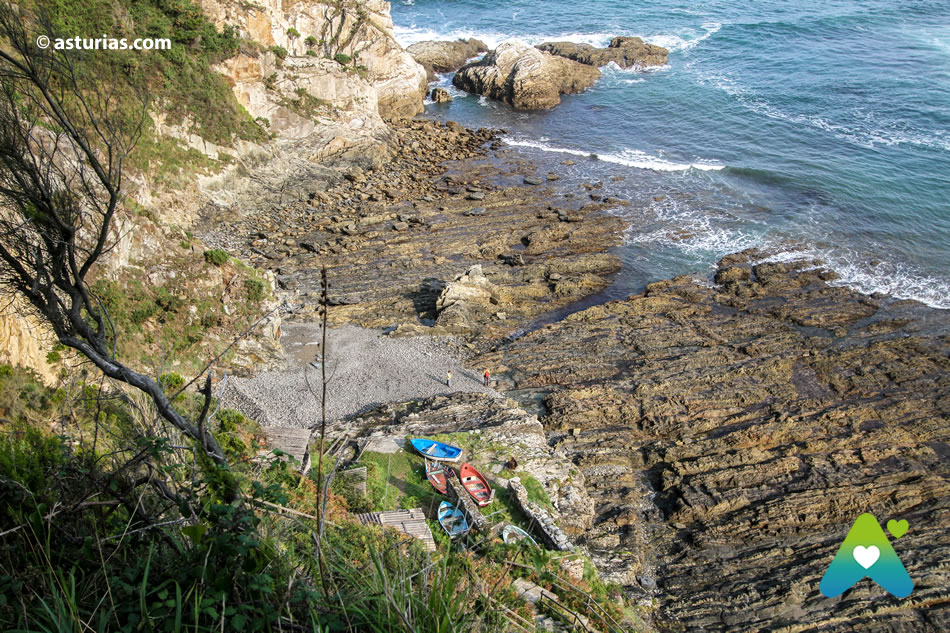 Geologically it is a gold mine. Sediments of the lower Paleozoic and some conglomerates of Cenozoic age appear. It has been proven that the marine action is very intense here, with very high wear rates; especially due to the shaping of the waves during storms. A continuous erosion that is ending the shapes and reliefs that now surprise us and that, incidentally, also affects the cliffs themselves. This is clearly observed in the hanging valley that we leave on the left as we descend through the pedestrian access. The stream of La Gairúa fits and runs through the rock in its final section, forming a small waterfall before reaching the ground.

The eastern end of Gueirúa is its most emblematic and singular zone. Also the most poetic. A row of islets of sharp stone; the remains of an ancient ledge of quartz and slate that has been fractured and worn by the sea for centuries. An area known as The Forcada, which divides the beaches of Gueirúa and Calabón. 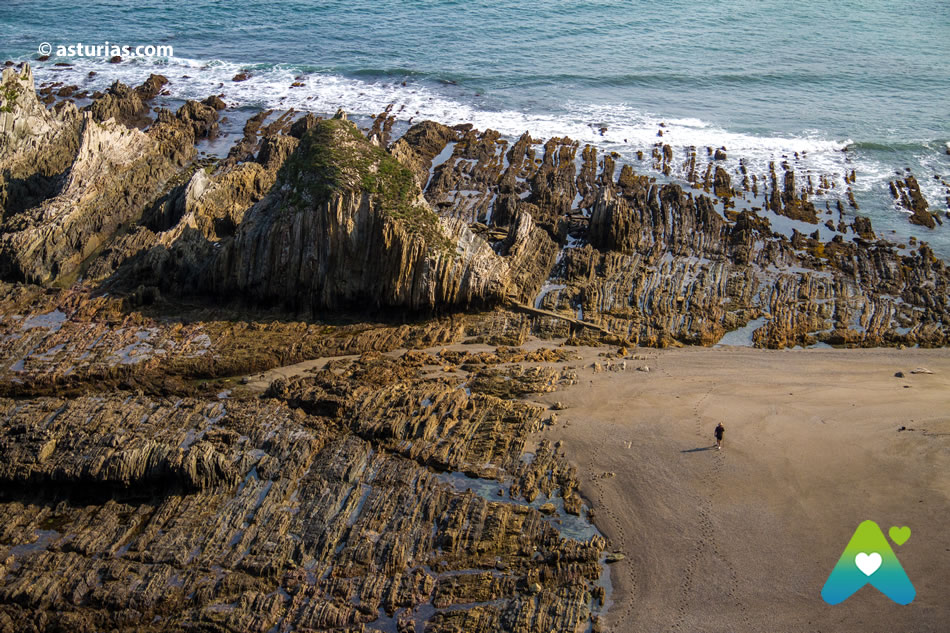 A beach to explore

For the rest of the mortals, those of us who are simply admirers of unparalleled landscapes, the beach of Gueirúa is a joy. At low tide remains a large area of ​​rocks, with puddles and marine pools of a great biological wealth. If we also get closer to the largest of the rocks in this space, and skirt it on our right, we will come across an abandoned cetarea by surprise.

Gueirúa you have to breathe it; feel in the skin your humid microclimate and prone to haze. It is necessary to listen to its silent rumor, to appreciate its recondite condition while we tread it. Only thus is it worth the initial walk and the farewell ascent (more than 200 treads and a kilometer of uphill path).

It is advisable to wear booties to explore this habitat in all its dimensions and to be able to explore it calmly. The bath requires good maritime conditions and a certain caution when we have decided on the place to dive.

Dogs They usually enjoy this beach more than humans. There is no prohibition in sight.

How to get there:

We will access from the town of Santa Marina, in the municipality of Cudillero, through a path that we will cover in a half hour.

We will leave the car in this town and just after the sign with the name of the town, after a large blue house that serves as a reference, the journey begins. A well-marked path that we will not leave at any time.

The last section of descent of the cliff is done through a stair (some 200 rungs) with quite unevenness.

to 1,79 km All extremely natural. We are talking about a genuine space whose main attraction lies in its conservation and that, therefore, demands average respect ...

to 4,98 km The beach is located at the eastern end of the Valdés coast, near the border with Cudillero, two kilometers from the town of the same name. ...

to 4,98 km The enclave of Cadavedo was awarded the most beautiful town in Asturias award in 1954. Today it occupies what was once the site of the pu ...

to 5,96 km House from the end of the XNUMXth century, completely restored. The town has all kinds of amenities (bank, restaurants, supermarkets, hairdresser .....

to 5,98 km House located in a closed farm, with its own garden and parking, according to the traditional architecture of the area and with a very careful interior decoration ...

to 6,45 km El Otero located 2 km. from the beach of San Pedro de la Ribera (Blue Flag) and 8 km. from the port of Cudillero, it has four apartments with garden...