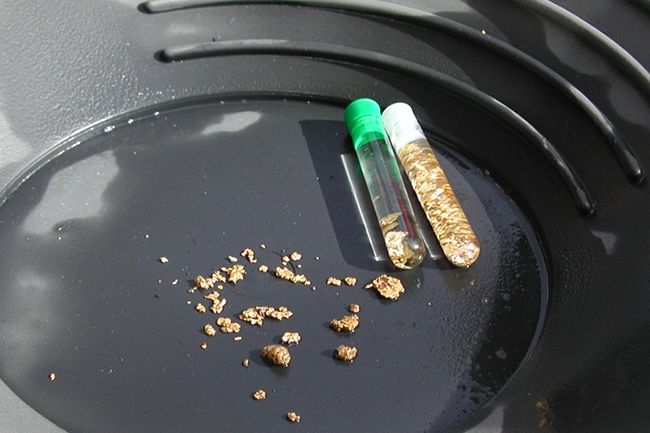 The gold rush in Asturias

The gold rush in Asturias

Gold fever is a phenomenon as old as humanity. The Romans were able to move mountains and change the course of rivers to access the sites. In Asturias, in the council of Tineo, there is a population with its own name in aureus: Navelgas. Its fame became so great that the area soon earned the qualification of "The Golden Valley". Here the ancient Celts and Romans sought nuggets, and in the 50 decade of the past century a mining company tried to exploit the old mines without much success.

The Gold Bats Association "Barciaecus" of Navelgas, invites you to participate in the National Gold Batting Championship.

At present it is still possible to find gold. In Navelgas there are many families that preserve the tradition of hitting the sands of the river in search of seeds. Not many years ago, what they found was sold to dentists to earn extra money.

After the economic exploitation of yesteryear and the gradual decline, the search becomes hobby and sport Worldwide. Were the Finns who put the first stone of this playful reconversion when realizing that after the closing of the mines the best thing was to bet for the tourist promotion organizing contests. Batting fans they are great travelers who search all over the world for those places where it is still possible to find nuggets. He sentimental and scientific value of gold is today the motive of a new fever that does not seek great discoveries, that goes mad with the minimum. For these 21st century adventurers, finding gold, however small, is basically a great satisfaction.

Navelgas is the most suitable place in Spain for the practice of this sport that has more and more followers. Proof of this is that for a decade this small Asturian town has hosted the National Championship of Gold Batters, in 2005 hosted the European Championship and in 2008 becomes for the first time the headquarters of the world Championship.

The World Goldpanning Association decided in a ceremony held in Pilgrim's Rest, South Africa, that the Tinetense town organize this event. It is a unique event in Asturias. The competition starts in the month of July. Some 400 gold prospectors, some of them arrived expressly from Canada, Australia or South Africa, take part in this test that will continue live more than 10.000 people.

When the game starts, each contestant receives a bucket filled with sand where previously the organization has deposited several gold lamellae that measure between 0,5 and 1,2 millimeter. The participants have to find those nuggets in the shortest possible time. Water and sand weigh less than gold and the key is to eliminate what is not worth and to sharpen the view in search of golden flashes.

Apart from the competition, Navelgas is also a good destination for free hitting. In the Navelgas and Bárcena rivers (both tributaries of Esva) there is still much gold to discover. If you propose to see, you find it. The largest nugget appeared in the last century in Spain was found precisely in the Navelgas, in July of the 2001. It was 24 gold carats and weighed 27,2 grams.

Such a finding requires certain knowledge on geology, selecting certain geological levels of greater wealth or certain areas that have acted as traps, within a fluvial channel. Once the sediment has been extracted, it should be screened, preferably in water, to remove the larger stones. With the process of raising and lowering the trough above the water level, we eliminate almost all of the light sediment and concentrate the heavy minerals (including gold) at the bottom of the trough.

We can get to feel very lucky in this activity, it's just a matter of proposing it.

Photos provided by the www.museodeloro.es

to 0,31 km Asturias has its own museum dedicated to gold. The Asturias Gold Museum (MOA) is a unique space to learn about the geology of gold, its o ...

to 3,97 km The house is an old stone construction, typical of the area, made of stone and wood, located in a small village, in a very ...

to 4,80 km For some it is the most Asturian way of getting married. A wedding couple who wishes to marry by this ancestral rite must request it ...

to 8,63 km I have been there many times since I was "hooked" and each time I go the sadness caused by checking his condition is inevitable. Of the entire monastic ensemble ...

to 12,42 km Asturian rivers have specialized in leaving us unforgettable images. Forced to overcome huge slopes, they offer a great erosive capacity, and ...

to 12,74 km Located in the Asturian mountains, it has impressive landscapes without leaving the walls of the house, but at the same time it is located 20 ...

to 12,88 km In this territory, which includes inhospitable places, one of the most marginalized ethnic groups in the history of Spain lived until the middle of the XNUMXth century ...