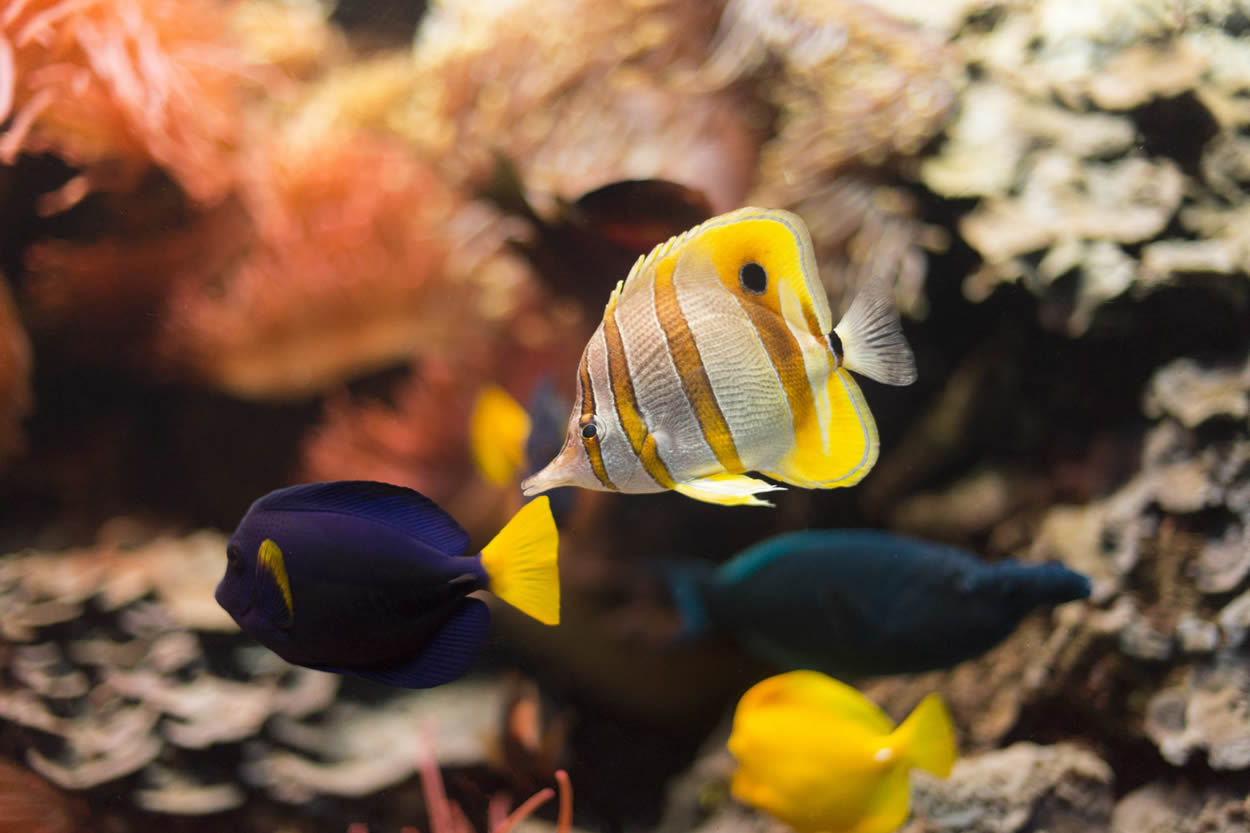 To become like a fish in the water you just have to get carried away by the current. The aquarium of Gijón, inaugurated in June of 2006, makes it easy for us thanks to a very worked and “speztacular” aquatic circuit, as the official publicity of the aquarium says. Nobody leaves disappointed. After about two hours of travel, the visit will have passed in a sigh, because the time we have spent «underwater», trapped by color and biodiversity, is a relative time, tiny, that runs much faster than the one that sets the clock.
Photos © Gijón Aquarium.

Anyway, two hours give a lot, you can admire more than 4.000 aquatic, vertebrate and invertebrate individuals, belonging to more than 400 different species. The route passes through 60 aquariums of fresh and salt water in which almost all the seas of the world are represented. More than 2.000 cubic meters of water that recreate life in the Asturian rivers, the Cantabrian Coast, the Caribbean Sea, the Pacific and Indian oceans, the Red Sea, the African Indian Ocean, the South Atlantic Ocean and the Subtropical Atlantic Ocean.

Little by little we acclimatize to all habitats, mainly because it is forbidden to "not touch". The main characteristic of the Gijón Aquarium is its marked educational vocation, which is why it is suitable for children. At all times we are invited to maintain a direct contact with the species. We get so close to the fish that we are like one more: boxfish, small shark hatchlings, moray eels, turtles, penguins, eight sharks between 1,5 and 2 meters long that came directly from Florida; from the Asturian coast: lobsters, spider crabs, crabs, oricios, smooth, pixín or monkfish - this being the only Aquarium in Spain that has this species on display -, pouts, corvinas, breams and maragotas, from the Caribbean, species such as the humpback , the shoemaker and the shad, among others. The famous clown fish (consecrated by the movie "Nemo"), and others with such suggestive names as the catfish, the teether, or the yellow goatfish, are accompanied by the enigmatic hippocampi or seahorsesjellyfish rabbit fish and surgeons or the eastern Pacific carpet shark. There is also a place for the spectacular and colorful coral barriers patrolled by boxfish, cowfish, angelfish, and butterflyfish.

Where is the Aquarium and what will we see?

Located on the promenade of the Poniente Beach, without leaving the urban helmet of Gijón, The Aquarium, inaugurated the 10 of June of 2006, does not stop to increase its fame and its powerful attractive like must see.
· The Part of it is dedicated exclusively to the Cantabrian river. Very well set, simulating a rocky, with the noise of the water accompanying everywhere. Then we access the Cantabrian Coast, where an aquarium stands out in which we can enter the head and admire the movement of the fish from a privileged position.

· We arrived to two zones of Atlantic Ocean: the temperate and the Caribbean, the domains of "the great swimmers", as explained in the panels. In the temperate ocean, inside a huge and unique aquarium of 1,3 million liters of water and six meters deep, we see South Atlantic Bull sharks roaming at their whim, and gray ones too.

The trip soon takes us further south, at the end of Hornos, the home of the peculiar Magellanic penguins.

The installation also has a Species Recovery Center, which aims to turn the center into a national reference, a pioneer in the hard work of recovery and conservation of marine fauna.

* The ticket gives access to the aquarium once.
* The ticket offices will close one hour before the closing of the aquarium.
* People with disabilities must show the official supporting documentation.
* Children under 16 will have to enter accompanied by an adult.
* For other discounts or promotions ask at the box office. To apply them, an original and personal supporting document must be shown.

What to do in Gijon with children?

to 0,03 km Gijón is a city with multiple leisure alternatives for the little ones in the house. We propose some ideas that will surely be very attractive to you...

to 0,17 km It is very busy and easily accessible, with a wide central staircase and access for people with mobility difficulties. It is shaped like a shell and very ...

The Black Week of Gijón

to 0,28 km Ten days that begin with the arrival of the popular Black Train from Madrid, loaded with writers and journalists. This is the starting gun for u ...

to 0,40 km The Asturias Railway Museum is one of the few museums of its kind in Spain. It is created with the aim of conserving, researching and d ...

to 0,53 km The glass and slate building, with spacious and bright interiors, is a good example of avant-garde architecture. Oriented to the south and overlooking Cant ...

to 0,95 km A privileged situation characterizes the Hotel Don Manuel, located next to the main commercial arteries, in front of the Puerto Deportivo and the port of ...

What to do in Gijon with children?

Art Center of the Labor

What to see and visit in Asturias
What to see on the central coast of Asturias?
Asturias with children
What to see in Gijón