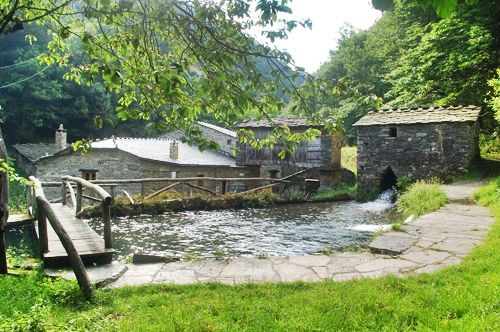 The route of water, fire and iron

The route of water, fire and iron

We would have to go back 2 or 3 centuries ago to understand many things of our 21st century. To make a comparative analysis between present and past is a solid work in which the oral tradition and the field notes of ethnographers and anthropologists play a key role. Perhaps 200 or 300 years should not mean a qualitative leap in life forms. But the multiplying effect of some common inventions has created a real gap in the rhythm of history.

The mills of the post-feudal Asturian villages They may seem charged with an ancestral touch, and in a way they are. Now, the function they fulfilled in the community, and the energies that they were able to accumulate, served, among other basic matters, to improve the quality and resistance of the clothing, provoke forces to grind the grain, sharpen and mold the iron. A little later they would even generate electric light.

In the council of Taramundi, and in general throughout the Asturian West, the mills and gears were developed with their own seal in the vicinity of the water. The fast currents of these lands, the orography in continuous inclination, the rains, and the abundance of iron ore made this region intelligently take advantage of the natural means to relieve a bit the manual work.

It shows us clearly these matters that used to be everyday and that in the light of modernity do not cease to amaze us. Its managers have for it a whole village, perfectly preserved. The maintenance of this place and some of its reconstructions have much merit, as well as the effort in the explanations, that we will not break down here completely to not take interest from this visit. The best thing is to approach and live it, because it is very difficult to understand without seeing. The fact that a waterfall simultaneously feeds a mill, a sharpening stone, a fulling mill and a metallurgical mill does not leave anyone indifferent. With fire and water, primary elements, we can reach levels of progress that we hardly value today. In the eighteenth century the peasants were very aware of its importance, in fact all this hydraulic enclave was used communally, and without it no famines would have been overcome, nor would there be adequate tools for the cultivation of the land. Neither would have advanced in clothes and shoes with all that this entails.

Contemporary demography is indebted to these improvements in the quality of life. Imagine if they had made those people without forges, without decks like Teixois, capable of molding anything and moved (more than 200 kilograms) with just pulling a rope once to open a gate and let the water run.

The channels and hydraulic wheels They were the blood system of this community and a walk through this ethnographic group corroborates us.

In Taramundi we can also continue to observe in detail the old production methods and hundreds of objects typical of that time, approaching the Ski Museum. A village that was always inhabited by families of ferreiros. The extraordinary density of utensils and tools exposed there is a real treasure. The cabazo (a type of hórreo) from the 19th century that we find outside is unique in decoration and beauty.

Taramundi's ethnographic trident completes it the museum of the mills of Mazonovo, specialized in fostering the direct experience of the public. It can be ground using reproductions of Celtic, Roman, African, Chinese windmills ... pumping water, producing hydropower with our hands.

After having visited this circuit, it comes out with the strange certainty that technology does not really belong to us, that it was invented when man appeared, and that above all it is indebted to nature. Imagine a world without water and without gravity.

to 0,02 km An 11th century hotel, in a rural setting with incredible views. A few decades ago, La Rectoral was the first rural hotel in Spain. Our XNUMX rooms, with rustic décor, ...

to 0,03 km The Hotel Taramundi is located in the center of the town of Taramundi.All our rooms are decorated in a rustic style, honoring the different places in the area, ...

to 0,18 km In the small town of Taramundi you can enjoy holidays in an extraordinary environment if you stay in our Taramundi Verde Rural Houses. Retro style apartments and houses ...

to 0,09 km The Taramundi Dairy Products Cooperative Society puts about 80 cheeses a day on the market. None exceed 500 grams in weight, the right size for the most popular consumption or ...

to 0,11 km An artisan work that produces custom-made pocket knives, highly appreciated for their functionality and beauty, and which is ultimately associated with scarcity. Production is exposed to orders, the ...

to 19,57 km Its administrative label is the Partial Natural Reserve of the Ría del Eo, which at the same time coincides with its ecological title. The geographical description, however, does not delve into its ...
See more things near here
Online store

with the latest news

An artisan job that produces custom razors, highly appreciated for their functionality and beauty, and which ultimately ...

Since those 80s in which some ventured into something - at that time - very novel, a lot has happened ...