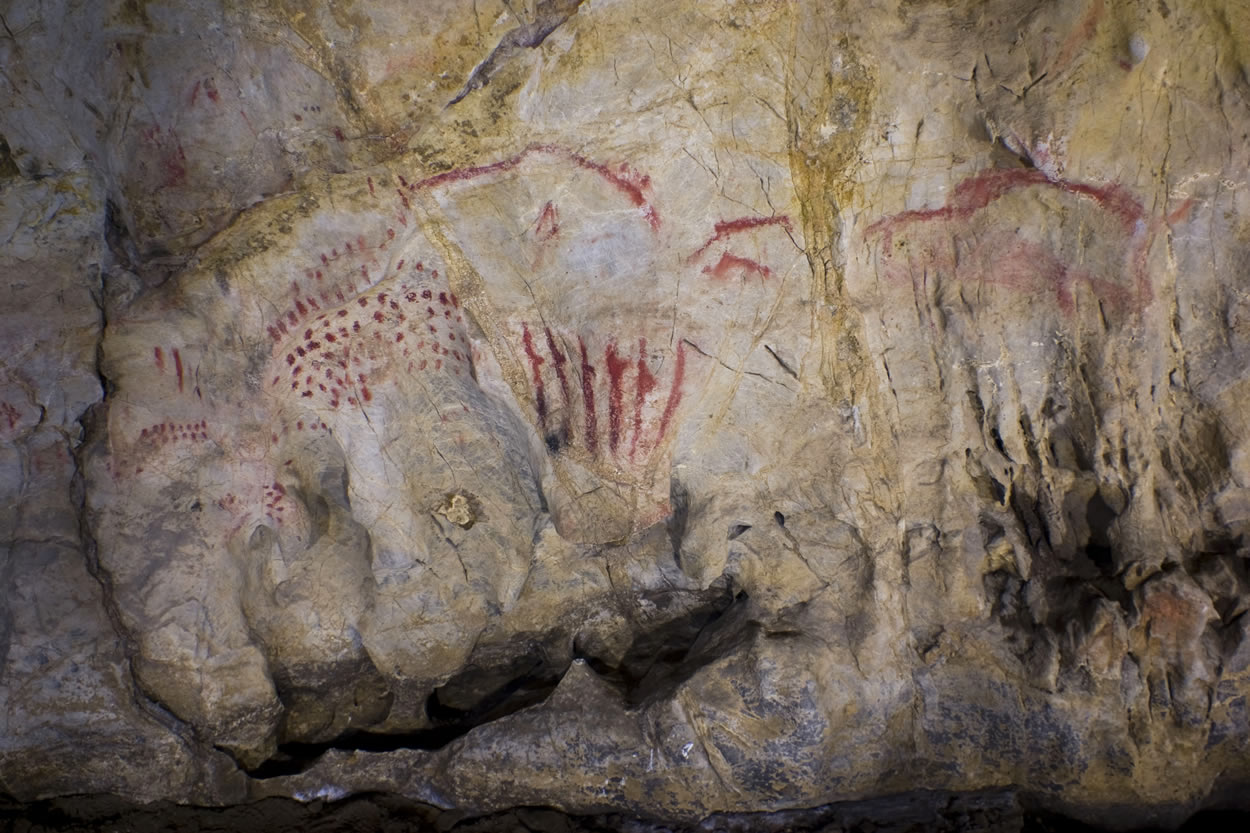 MainWhat to see and visit in AsturiasCueva del Pindal, a rock sanctuary
Updated on 13 September 2022

Since the prehistory was let see by the lands of the current Ribadedeva it has been a long time, so much that now the sea is at the foot of the same cave that we are going to talk about, when formerly it was more than four kilometers away.
The photos of the interior of the cave are from Sergio Ríos, Ministry of Culture of the Principality of Asturias.

The Pindal Cave, in the beautiful village of Pimiango, it was in its way an art center, then related to mystical and supernatural issues. Its walls served for primitive man to release his well-known love for the technique of representation. In the cavities there is a large sample of this purpose, thanks to paintings and engravings that were growing in number and artistic quality generation after generation, throughout 50 centuries since they started, 14.000 years ago.

Why visit the Cueva del Pindal?

The cavity, elongated and about 400 meters long, was never inhabited. This denotes, more if possible, the exceptional function it fulfilled. A feature that could jargons as a cultural, skipping the semantics of that time that surely made no distinction of this kind. Paleolithic artists who lived in the current Ribadedeva chose the cave find it appropriate to their artistic purposes, and not so much for its potential as a house or home. In her they left a deep testimony of their time based on portraying nature and looking for more complex signs to explain the mystery of existence. They used ocher and black tones; with them they traced fundamentally animal contours. In the end, the paintings would be symbols to identify themselves as a group. The cave that saw them being born became a sanctuary for their immediate descendants and in a jewel for humanity in our eyes

The cavern consists of a vestibule about ten meters wide, to which it continues a wide and unique gallery. The guided tour of the cave leads us to two main areas. Both have decoration. The first is about a hundred meters from the entrance and there we found the head of a red horse. Later on, and always among the profiles highlighted in rock from the same gallery, we discovered another horse's head, this time schematized with black lines, as well as a cervid painted in black that is suspected to be a reindeer. A little further on we see signs that look like trees. The second area that we can differentiate from this first one is about two hundred and forty meters from the entrance. Here it is the main panel, which consists of an important group of figures. At this point the paintings are as abundant as the engravings. Signs also proliferate. In addition to the points there are more complex shapes that look like clubs. Paintings, due to their degree of artistic abstraction, can be placed at an advanced stage.

Since the beginning of the 20th century, the Cueva del Pindal is part of the Regional Artistic Heritage. Later it is declared a National Monument. In a research work carried out by rock art experts, 1954 manages to date 45 paintings, the most outstanding being 9 horses, 11 bison, 2 elephants, 3 cervids, 1 boar and 1 fish, a wide range of fauna of the time. The close symbolic relationship that united man and animal nature is obvious. Other types of relationships, superstitious or supernatural, correspond to the criteria of contemporary analysts.

On the other hand, the presence of an elephant, a mammoth more concretely, silhouetted with red lines and somewhat faded, has a great importance in the rock art known in the peninsula, since this type of representations are very scarce. In addition they speak for themselves of an extremely cold climate, as already indicated. And there really were mammoths. Very close, in the limits of the council of Ribadedeva with the neighboring council of Llanes, a few years ago a skeleton of this type of pachyderm was uncovered. He waited for the investigators in a cliff cavity that was hidden by the water at high tide. The rescue was very difficult but it materialized, and the reality of its fossils now serve to verify the veracity of paleolithic paintings, of which we never hesitate.

The environment of the Cueva del Pindal

Approaching the cave of El Pindal can also be a rewarding excursion for the eyes. It is located on the Cape of San Emeterio, on the sea, in a spectacular panoramic view of the cliff coast of these lares. We also have a path along the high coast to walk slowly and admire the Cantabrian Sea and one of its most amazing coastlines. Near the cave we can also enjoy examples of buildings from other times closer, such as the Church of Santu Medé and the ancient monastery of Tina.

The “Tierra Mágica” routes combine hiking, environmental education, landscape interpretation, children's workshops., affective education and education for coexistence. All of them are in places that have a special interest, be it natural, cultural, historical, ecological, aesthetic… and are especially recommended for children and young people.

The Pindal cave It houses one of the most beautiful samples of Palaeolithic art in the region, made up of a discreet group of animal representations, among which the figures of a fish and a mammoth stand out. The beech forest of San Esteban de Cuñaba allows us to discover, under the dense foliage of the beech trees, a unique ecosystem, with a special microclimate, whose animal and plant communities are represented by the great spotted woodpecker, roe deer, and coal tit ...

Tierra Mágica is a project aimed at educating ...

How to find us:
From the N-634 national road, take the local road RA-1 to the place of Pimiango, which is about 2 km. In the village, continue towards the lighthouse by local road until a fork. In front is the parking lot; to the right, road to the cave, which ends in front of the hermitage of Santu Mederu. The cave is about 200 m. accessible by pedestrian path.

to 1,89 km In Colombres, Ribadedeva, the enriched Indians radically transformed the small rural village into a modern villa, with colorful architecture ...

to 1,92 km Where is the Archivo de Indianos located? The house where the archive-museum is located was built by the immigrant to Mexico Iñigo Noriega Laso, who ...

to 1,93 km Capital of the municipality of Ribadedeva, this town could have become an important city if the intentions of its...

to 2,36 km The Deva River, until it reaches its mouth in the Cantabrian Sea, runs 62 kilometers. From his birth in the circus of Fuente Dé he begins to interfere ...

to 2,80 km La Franca Beach is undoubtedly the most attractive and accessible beach of all the beaches in the council, and for this reason the beach par excellence of Ribade ...