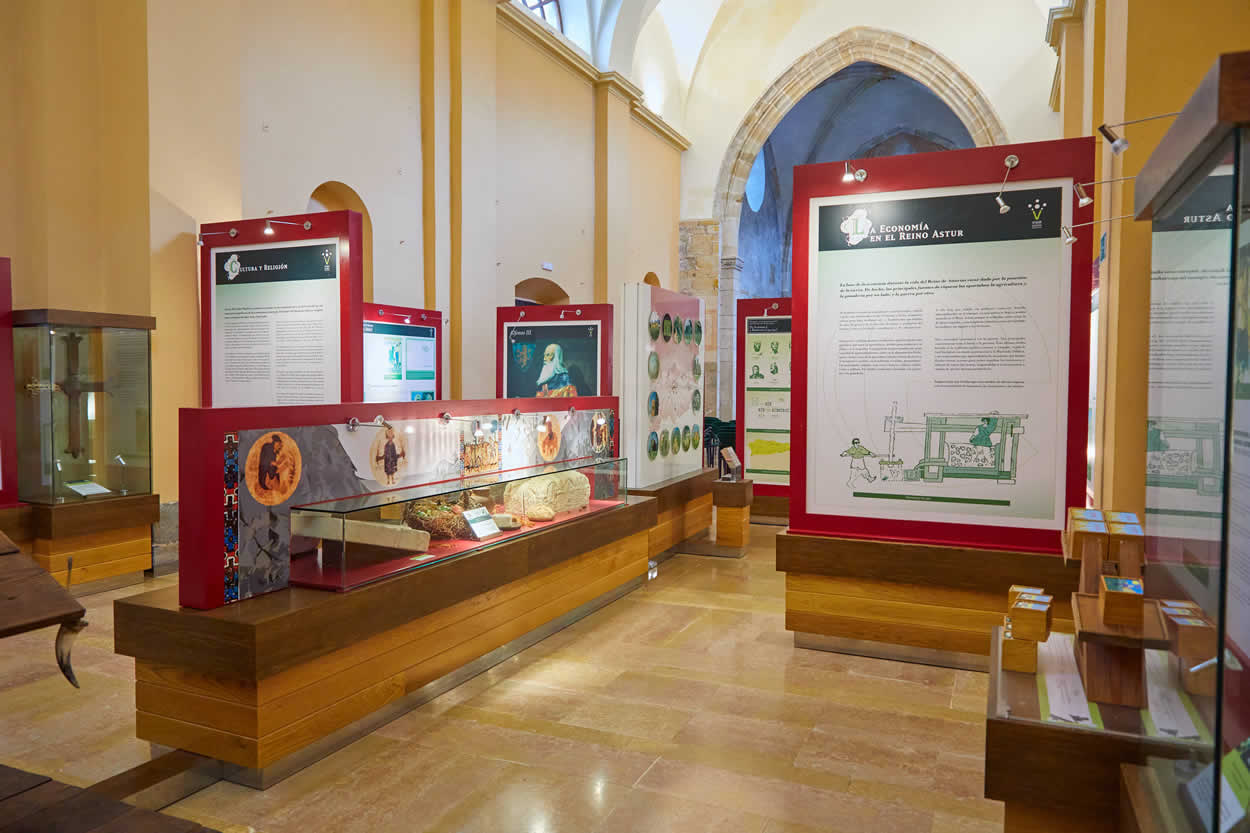 The Classroom of the Kingdom of Asturias invites to the recreation of one of the most exciting periods of Spanish history. In the exhibition, the Battle of Covadonga, which faced the Christian and Muslim troops. A mythical battle that ended with the flight of the Arabs and the constitution in Cangas de Onis of the Kingdom of Asturias, with the King Pelayo to the head.


The classroom, a cultural facility that glimpses great historical horizons, It is located in the old church of Cangas de Arriba and pursues a panoramic and didactic approach to the historical reality of the Kingdom of Asturias. The visit involves in particular an approach to the period between the XNUMXth and XNUMXth centuries, through a series of explanatory panels and the exhibition of reproductions of objects, images and testimonies of the time, which clearly show us the territorial scope and the political influence of the Asturian kingdom after the withdrawal of the Muslims.

We can also enjoy an ambitious audiovisual assembly, centered on the Battle of Covadonga, which is capable of placing us in front of historical events, generating sensations in the five senses. The installation is reinforced with surprising lighting and sounds that delve into the recreation of the contest. The complete audiovisual works as an element of interpretation for a historical event of such depth and with many historiographic gaps. Since Asturias was the scene of the first triumphant resistance to Islamic power, Covadonga and the Cangas de Onís valley have always attracted the attention of a large number of scholars. The scientific data about Pelayo and the events that occurred in Covadonga, are scarce, blurred, contradictory and not always reliable; although it is undoubted the weight of the battle in the later Reconquista, as well as the monarchical dynasty that from the VIII century is installed in the Principality.

The Asturian monarchs They brought relics from the Holy Land, created and developed the pre-Romanesque churches and civil works that are now recognized as World Heritage, and promoted the realization of works of art such as La Cruz de La Victoria, La Cruz de los Angeles, La Arca de las Agates, etc. The undisputed leader of this saga was Pelayo, which reigns between the years 722 and 737. His son happens to him Favila that dies in a hunt, destroyed by a bear. Alfonso I, Pelayo's son-in-law, climbed the throne later, 739-757, and was the one who ordered the construction of the first Shrine in the Grotto of Covadonga. Their conquests arrived from the Cantabrian coast to the South of the Douro River. The line of succession would continue with Fruela I who was killed. After him he takes the throne Aurelio, then the king Silo that moves the court to Pravia. Mauregato queen between 783-789 and it happens Bermudo the Deacon, which moves the Court back to Cangas de Onís. Alfonso II «The Caste», moves the court to Oviedo and marks a time. His long reign represents and consolidates definitively the Asturian kingdom. It happens Ramiro I that the previous work continues. Then it would come Ordoño I who establishes unions and alliances with the Mozarabs who continued to practice Christian worship. By last Alfonso III "the Great" (866-910) strengthens the Astur-Leonese kingdom. At his death there is a political crisis, the court moves to León and Asturias begins its isolation throughout the tenth century.

The relevance of this Asturian dynasty in the history of Spain is remarkable, and its birth, splendor and decadence we find continuous data and objects inside the church that serves as the headquarters of the Kingdom Hall. The carving of royal buildings, documented ecclesiastical foundations, necropolis and fortifications can be discovered on the panels and archaeological traces; battles and even rock architecture in the area.

The equipment also fulfills the function of serving as an interest to smaller, who have at their disposal various interactive facilities to learn while playing.

to 0,22 km The Lagos de Covadonga Classic Cycle Tour is one of the most surprising sporting events in the Bay of Biscay. With almost 2.000 participants, the se...

to 0,36 km The Sunday market in Cangas de Onís is the most authentic souk in the eastern region of Asturias. Jovellanos in the Diaries of him described this market of ...

to 0,55 km Nowadays, Cangas de Onís has become an important tourism center, thanks to its scenic beauty, its history and art, its gastronomy ...

to 0,63 km In the 12.000th century, during the coastal region, more than XNUMX salmon were caught in the Sella alone. In the Benedictine monastery of San Pedro de Villanueva, ...

to 0,87 km ONLINE RESERVATIONS Our APARTMENTS in the urban area of ​​CANGAS DE ONÍS, make up the other part of "ALOJAMIENTOS FERMÍN". Distributed in different ...

to 0,88 km Fermín Accommodations 2-star FAMILY-friendly guesthouse, it is located in the URBAN CENTER OF CANGAS DE ONÍS in a quiet area, with numerous ...