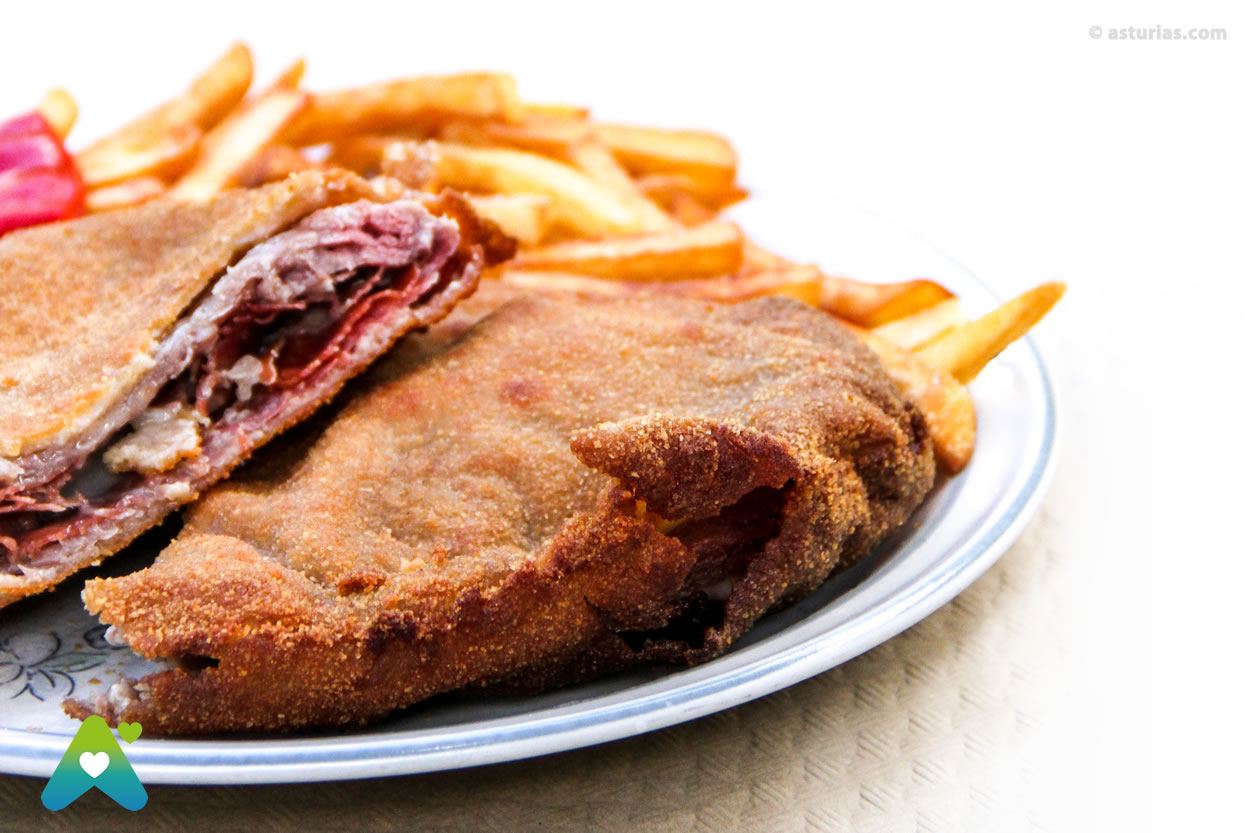 The cachopo is an Asturian preparation, a basic dish of its cuisine that abounds in all its geography but, because it is so good, has managed to internationalize, to leave its borders, to acquire a thousand and one nuances and variants. There is cachopo in Mexico, Canada, the United States, in Madrid, Rome, London or Berlin. Nevertheless, the real cachopo, the grandón, the genuine one, the one with whom you "fartas", continues to be served in Asturias, in its restaurants and chigres. Nourished an identity culture around "house food." There is nothing more humiliating for an Asturian to compare the cachopo with a san jacobo or a Cordon Bleu.

It's good to have a couple of steaks with ham and cheese inside it does not seem very original. But in Asturias they turn it into slow food, into pleasure, into something accredited and with its own stamp. That's why imitators and slanderers come out. Envy ... It is true that before the size was more important, with cachopos like sheets that weighed a few kilos. And although there are still large ones (cachopho piece!), In Asturias they have specialized and refined, exploiting all the possibilities of a product that still has a long way to go.

Few words are needed to describe it: "How rich he is", "the best in the world". If we have to define it without passion, we already use a few more words: «it has beef steak, serrano ham, cheese, rallao bread, potatoes and a pepper, it is chewed well».

It is said that it has become popular throughout the world because it is an anti-crisis option, a sturdy and economical dish. But we should not lower it to a war food. Nothing is further from reality. A good cachopo is a feast for the senses and, in some cases, a haute cuisine dish. It is also a topic of conversation like few, almost a way of life for some. The cachopo is friendship. People like to talk about who ate here or there. The fans of the subject, who are many, travel around the Principality eating cachopos, comparing versions and writing their impressions in culinary blogs. They repeat where they like it most and they say there are some that improve over time.

Getting a cachopo to move forward as God intended is not an easy matter, although it seems. There may be several blunders, such as frying in oil at low temperature and in the end float in sticky liquid, or that is hard as a stone. Do not know meat, or do not know ham, or cheese. Or that he knows too much of one of his ingredients above the rest. Find harmony, the right measure in the mix, is the point sought by the experts cachoperos and that also applies to the profane in the matter.

The Asturian cachopo and its variants

So far we have seen the type cachopo, the classic, the most consumed, which can be found throughout the Asturian geography with better or worse luck, but the cachopo supports different ingredients and side dishes, some even more traditional and tasty than those brought by the standard cachopo that we have seen. Valuable garnishes are those of mushrooms and peas. And if we want to respect the historical character of the dish, instead of potatoes, nothing better than turnips cooked or fried in lard. It can also be accompanied by a sauce made with chicken and rabbit broth. The important thing is to give it a juicy touch.

And what about the cheese? In Asturias there are half a hundred varieties, and only with changing cheese do we obtain a different cachopo. We are worth all or almost all the cheeses: Cabrales, Gamoneu, Afuega'l pitu, cheeses from the two peñamelleras, from Varé, from Los Oscos, Casín cheese, from Porrúa, from Vidiago, from Pría, from la Peral, from la Arquera, etc. The important thing is that it melts and flows and is not cloying. Cheeses that are not from Asturias are also worth it, of course. Tetilla cheese, manchego, provolone ... In Extremadura, for example, we would make a majestic cachopo with Montanchez ham and Torta del Casar.

It could almost be said that there are no two cachopos equal and their breaded character that holds the filling well allows us to make them with tapas of ox, sirloin, pony meat, chine of Tineo, chicken, fish, even boar meat. And the vegetarians? They can be covered with mushrooms, with eggplant, even with zucchini.

Fillings can include asparagus, peppers, jerky, mushrooms, blood sausage, apple ... There are cachopos stuffed with frixuelo, octopus, Creole chorizo, and also minced meat. There are cachopos with bacon and barbecue sauce. Italian style cachopos stuffed with York Ham, mozzarella, natural tomato and oregano. And there are more original ones… although there are also rare ones, rare ones that do not succeed because they are pretentious or because of a bad hand in the kitchen. It seems that the only limit is imagination and good cooking.

Size does matter. It depends on how many of us sit down to eat. There are still giants, which are already cut to facilitate the distribution. You have to go with many friends to attack them head on.

The quality-price-size ratio is usually quite reasonable in all cases. Sometimes the price may seem expensive for a cachopo, but we do not take into account that ten people have eaten and that the waiter remained pensive for a while, looking for where to put the fountain. It may happen that the table is too small, of course. There is also the legend that there are people in the mining basins able to eat such a monster and stay hungry. But they are atypical cases.

In general there are three types of cachopo: small, medium or large. Sometimes the medium is requested and immediately we see that we have screwed up. Better would have been the great one. Sometimes the bigger one is asked for and the better it would have been the medium one, even the small one was enough. Normally, cahopines fit in the palm of your hand. It depends on the windlass or the restaurant. The cachopos are resistant to being standardized, it is their nature.

The important thing has already been said: cut well with the knife, which creaks a bit, that blood cheese, that is so juicy that you just have to chew it and, above all, that it must be shared with other people to start a conversation and, in passing, to be able to end it.

Cider: the drink of Asturias