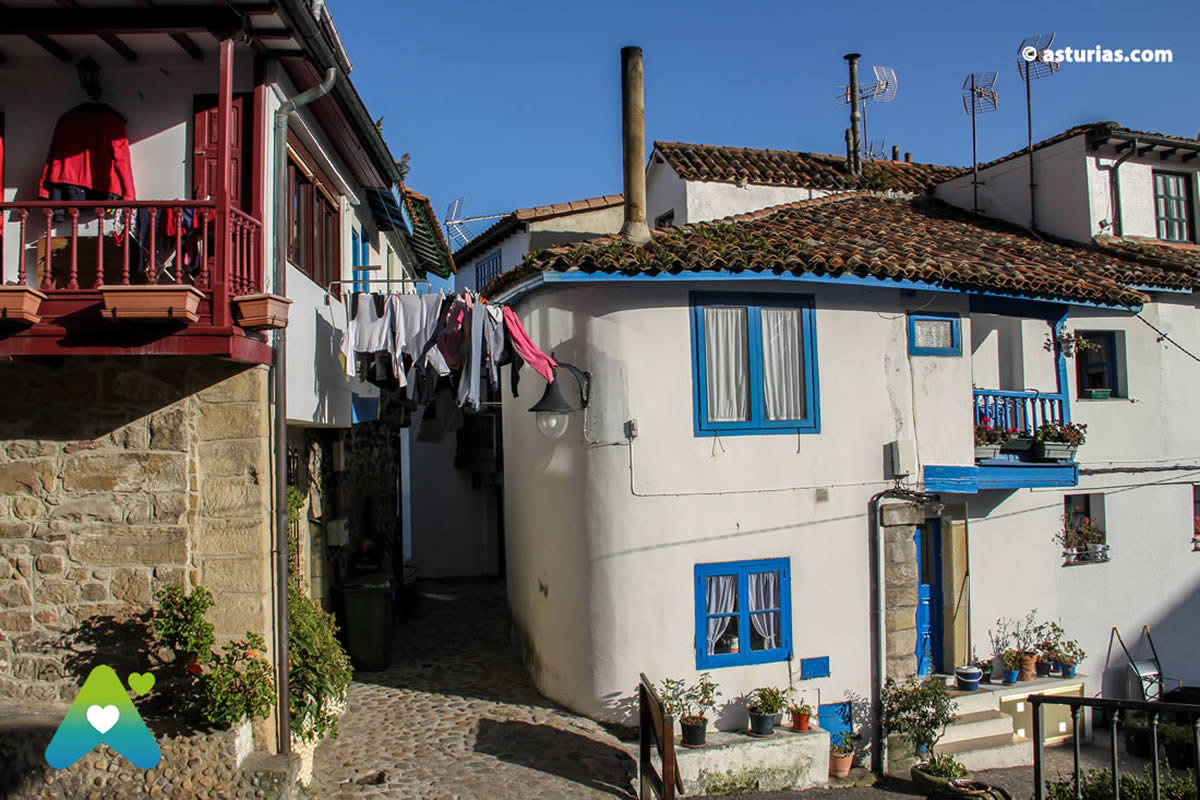 MainWhat to see and visit in AsturiasBowls: the town and the sea
Updated on 13 June 2022

Tazones saves the essence of the Asturian village, but in this case a peculiar village, with granaries, but open to the sea, with the air of a villa. The recesses of its physiognomy resemble the capricious folds of a network that rests in the port and has trapped its 300 inhabitants. Here and there we find lines, small roads that intersect with others in a friendly labyrinth.

Stoned streets and low houses. There are also paths that do not lead anywhere in particular, perhaps to an unbeatable promontory to enjoy the view. We put ourselves where we put ourselves we always discover Bowls like a different town, colorful, almost symmetrical, gently falling into the sea. The entire town is a giant mirror, and you like to look at yourself from all positions. Its reflection in the sea is romantic, almost narcissistic, a point of no return where reality gently churns and evaporates. The paintings on your balconies and windows they are so intense and so bright that they imitate the days of open sun on their nearby sea.

The smell of cider, seafood and fish reaches us on the main road. There is an appetizing offer of winches and restaurants that feed on native fishing. A work that is treated with care and that has port, brotherhood, cetarea and marine facilities for its performance. What we do not see is any whale because Tazones has left behind that stage of whaling port, which gave him the reputation of an intrepid town.

How to get to Tazones?

When we get closer to the town we already sense that we are not going anywhere, our spirit is that of explorers looking for something intense. From Villaviciosa we take a local road attached to the laugh. Later on we see from the heights the Rodiles beach, admirable in proportions and beauty. From there to Tazones we descend continuously on a paved road, with the added suspense of its dozens of twilight curves. The exuberant vegetation seems that it will end up blocking our way. But we suddenly reach sea level like someone who discovers by surprise the anteroom of a great cave, in this case without stone tunnels, open to a bluish and heavenly horizon with a flirty beach included.

When we are in Villaviciosa he takes the AS-256 direction Gijón, take a detour to the right to take the VV-5 and after 10 kms. we arrived at Tazones.

What is there to see in Tazones?

In the stones that surround the town we discover the first history of Tazones, its protohistory. We came across each other one of the most important deposits of dinosaur footprints in Europe, a generous contribution to the increasingly popular Asturian Jurassic coast. In the vicinity of the local lighthouse we find a multitude of tridactyl ichnites that intersect in various directions and constitute several tracks, as well as a tail drag track. For its part, on the beach we see another explanatory panel that tells us that about 120 meters from it we can see the traces of these monsters from the past. On the cliff at the western end of Tazones, a few meters after passing the harbor breakwater, a magnificent example of a vertical fault of Jurassic composition can be seen. A few meters ahead we see footprints of roots and paleosols.

Approaching Tazones is a good idea, and a good way to spend your free time. The view is entertained, we eat well, the immediate sea relaxes us and there are enough mobiles to avoid sitting for an excessive time, walk and leave our anonymous footprints like Charles V or the dinosaurs of another era left one fine day.

Fame to Tazones also attributes regal character to him. The royalty of Tazones comes from inheritance. A 19 of ...

Sleeping in Tazones and surroundings

Rural houses and apartments in Villaviciosa, to enjoy a getaway near the beach. Discover the Region of ...

to 0,97 km House with two floors and ground floor, restored in stone and wood, with a garden area equipped with a terrace and parking. In the middle of nature, 2 km from the ...

to 2,17 km First of all, and if we go to Rodiles beach in summer, we will see that it is a popular beach, where the inhabitants of Villavicios ...

The estuary of Villaviciosa

to 2,27 km 1 · Rodiles Beach One of the best beaches in northern Spain for this sport. It offers different possibilities. At low tide, at the western tip ...

to 3,05 km El Güertu rural apartments are located in the middle of nature, close to the sea, in the Ría de Villaviciosa Natural Reserve. A quiet area ...