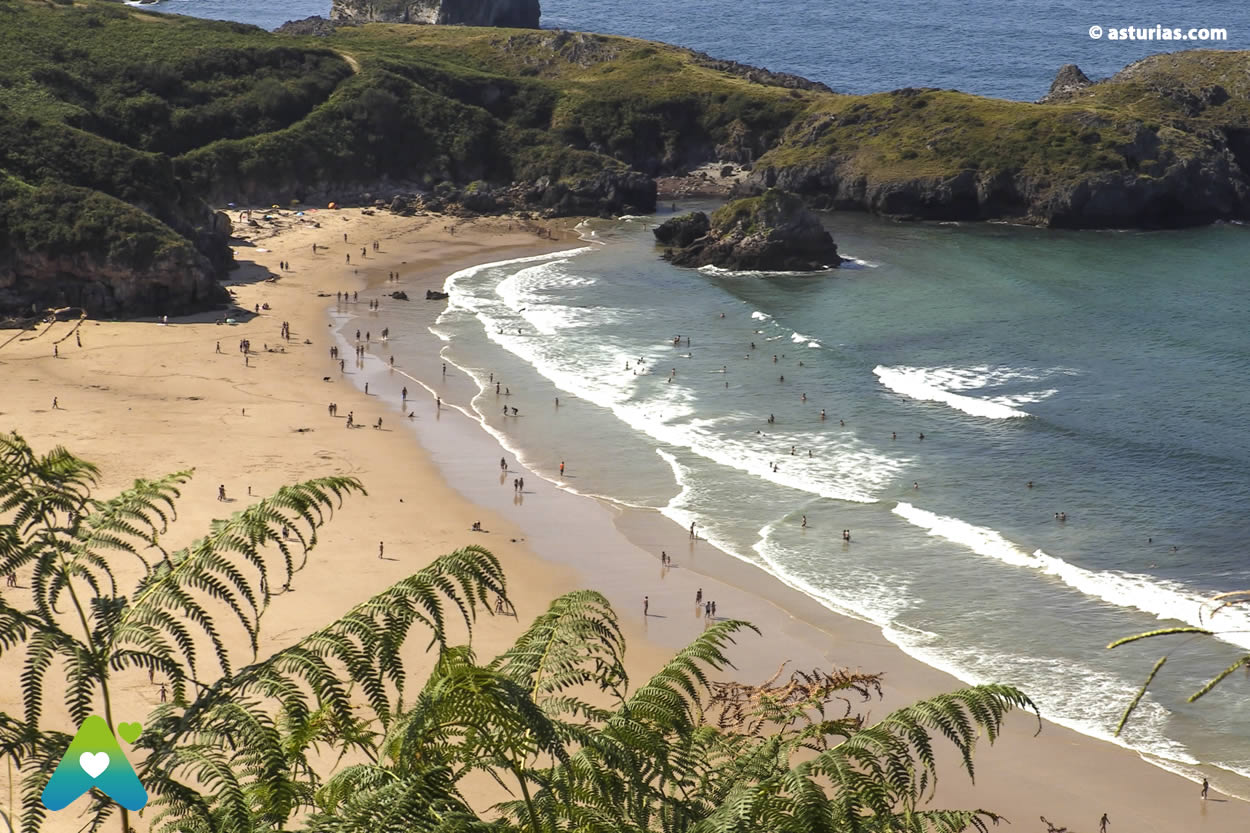 Making a ranking of the best beaches in Asturias is not easy, there are many beaches that deserve the honor of being on the list. Here we detail some that we highlight because they are special.

Asturias adds more than two hundred beaches on its coastline. Most are among the most natural and best preserved in Spain, and practically all of them stand out for some specific reason: for their beauty, for their rugged nature in many cases, for being popular and crowded in others, for their large size, for being coquettish coves ... Making a list of the best beaches in Asturias is a very difficult task but let's try it.

· In the western zone deserve a mention:
· Peñarronda beach in Castropol, La Grande beach in Tapia de Casariego, Cueva beach and Otur beach in Valdés, Frexulfe beach and Navia beach in the municipality of Navia.

Tapia has a lot of coastline, cliffs happen ...

· In the central area from the Asturian coast highlight:
· Salinas and El Espartal beaches in Castrillón. Oriented to the Northwest like most of the best surfing beaches in Asturias, it is considered one of the most appropriate for surfing.

We are talking about one of the largest sandy areas in the Principality in the town of Salinas, at the western end ...

The sea that forces steep rock cliffs on the coast of the center of the Principality, seems to surrender on the coast...

· The beach of San Lorenzo de Gijon. Urban and crowded beach, one of the largest in Asturias with 1,5 km in length. Peñarrubia and El Mongol, also in Gijón.

· In Villaviciosa, capital of cider production, is located the beach of Rodiles, one of the best beaches in northern Spain for this sport.

Beach of the East of Asturias. A minimal description circulating on the net explains that Rodiles is a long beach…

· In the eastern area from Asturias mention:
· The beaches of Santa Marina and Vega in Ribadesella, and the beach San Antolin in Llanes.

Oriente beach in Asturias. Vega beach, in Ribadesella, is a huge rugged corner, to the delight of ...

· The beach of Porcía, Tapia de Casariego
Porcía beach has a deserved reputation for being one of the most beautiful in western Asturias, it has several islands: Isla Grande, Isla Pequeña and Gavioteiro. It is also a refuge for migratory birds and has enormous natural and landscape value. It is worth visiting and enjoying its almost intact environment.

· The beach of Silencio or Gaviero, Cudillero
Fine golden sand combines with gravel and boulders. To access it we must leave our vehicle in the vicinity of the town of Castañeras and descend by steep stairs. It has a shell shape and a length that does not exceed 500 meters in length. Half a kilometer loaded with charms.
It is located in the western half of the council of Cudillero, to Poniente del Cabo Vidio. The nearest towns are Castañeras and Novellana.

· Beach of Cuevas del Mar, Llanes
The mouth of the small river Ereba forms a very interesting and beautiful karstic landscape. The whole environment is beautiful, there is parking and a "beach bar". Very close to the town of Nueva de Llanes, which is also worth a visit for its small streets with Indian mansions.

Beach of the East of Asturias. Coquettish beach located at the mouth of the Ereba river configures a very interesting karst landscape…

· Beach of Barro, Llanes
It is a semi-urban beach with a high influx of people in the summer season due to its proximity to the town of Llanes. It is ideal to approach with children because its waves are always moderate. It is advisable to go there early in the summer given the number of people who dare to visit it.

Beach of the East of Asturias. The Barro beach in Llanes is about 250 meters long and at low tide…

· Gulpiyuri Beach, Llanes
Small semicircular beach formed by a closed dolina and surrounded by cliffs, hidden in a spectacular environment. It has been declared a Natural Monument. You can only walk from San Antolín beach or from Naves and its isolation has allowed the relatively good conservation that it presents today.

Small semicircular beach formed by a closed sinkhole and surrounded by cliffs, hidden in a spectacular setting. Usually the level...

to 0,02 km Boisterous when the weather permits; And that even in the harsh winter months, the Wall continues to be a benchmark for walks, contemplation, ...

to 0,06 km We offer you a list of all the beaches with adapted services; Most have reserved parking spaces, ramps and special walkways for ...

The Citadel of Gijon

to 0,14 km It is known that housing is a basic social need. Also a right, at least since the Universal Declaration of Human Rights of 1948 and the c...

to 0,28 km Among the Asturian legends, myths and superstitions we are told about the «Espumeru», a restless child who rides on the edge of the waves, wallowing in ...

Beaches with dogs in Gijón

to 0,28 km Dogs can access El Rinconín beach all year round and San Lorenzo urban beach between stairs 2-8 out of season ...

to 0,37 km It is the capital of the Costa Verde and urban development coexists with a privileged natural environment. Gijón has something of a great village. The character ...