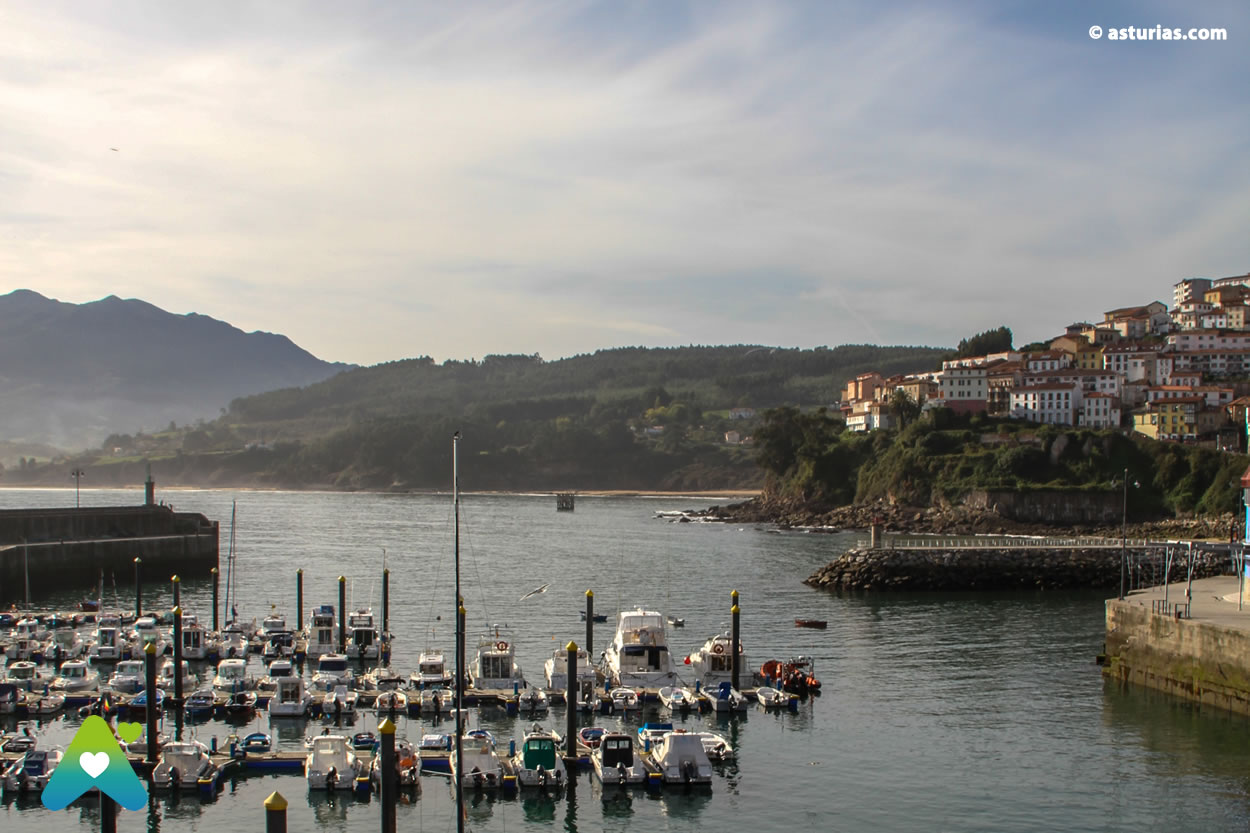 There are many towns that dot the Asturian geography and many towns that keep extraordinary corners, which surprise; Here we make a small list of those towns that are essential visits when one approaches Asturias. Charming towns of Asturias.

· In the western area of ​​Asturias all the chosen ones are coastal, although there are many other beautiful inland towns. We have beautiful towns like: Tapia, Luarca, Puerto de Vega or Navia.
· In the central area of ​​Asturias We have chosen three towns, two on the coast and one with a medieval past: Cudillero, Luanco and Bandujo.
· In the Eastern Asturias We have chosen several coastal towns and a couple of them inland: Tazones, Lastres, Ribadesella, Llanes, Bulnes and Espinaréu.

Other classifications and rankings are possible, we could make several lists with more surprising towns, loaded with history and with multiple incentives for a visit, whether you are an Asturian or a foreign visitor. We trust that you like them and we promise to do some more report with more locations.

The first impression you have when you arrive in Puerto de Vega is pleasant above all else. Our spirits are infected by the immaculate white of their houses. The nooks and crannies that make up its streets and alleys, which in another similar enclave would be narrow, are here an orderly and clean tangle, with a charming fishing port, through which it is a pleasure to walk and recreate. 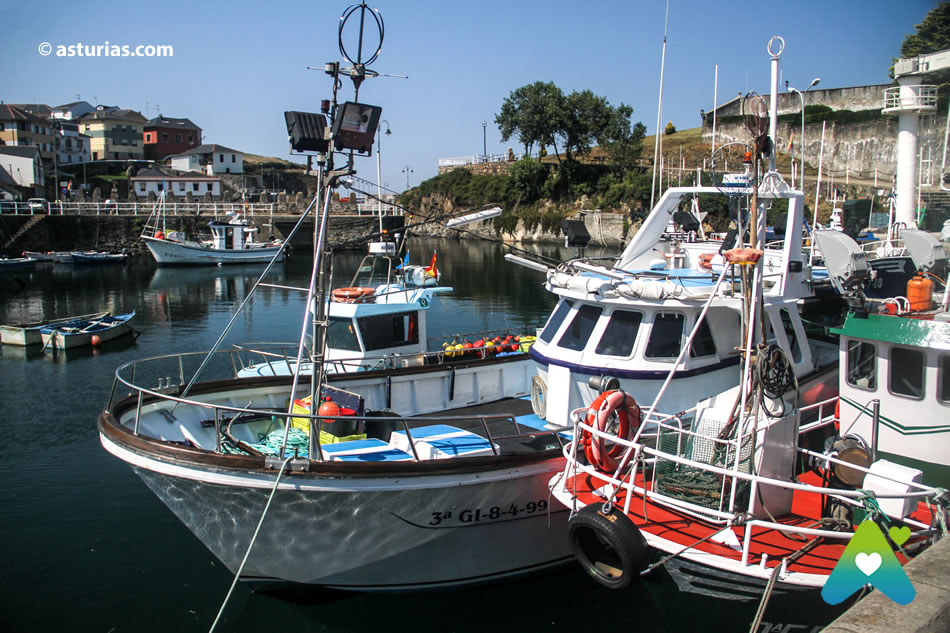 The fishing village of Tapia de Casariego is a coquettish enclave of the Asturian west coast. Its fishing port keeps the essence of always and its beaches and coves provide one of the most refreshing baths in Asturias. Tapia, with privileged waves, is one of the meccas for surfing in Spain.

The fishing village of Tapia de Casariego is a charming enclave on the western Asturian coast. Its fishing port keeps ...

The beauty of Luarca takes the form of a large aquatic "S", around which man and his initial seafaring activity, now mixed, have found millimetric accommodation, with a large influx of tourists in summer.

The beauty of Luarca takes the form of a large aquatic S, around which it has found accommodation ... 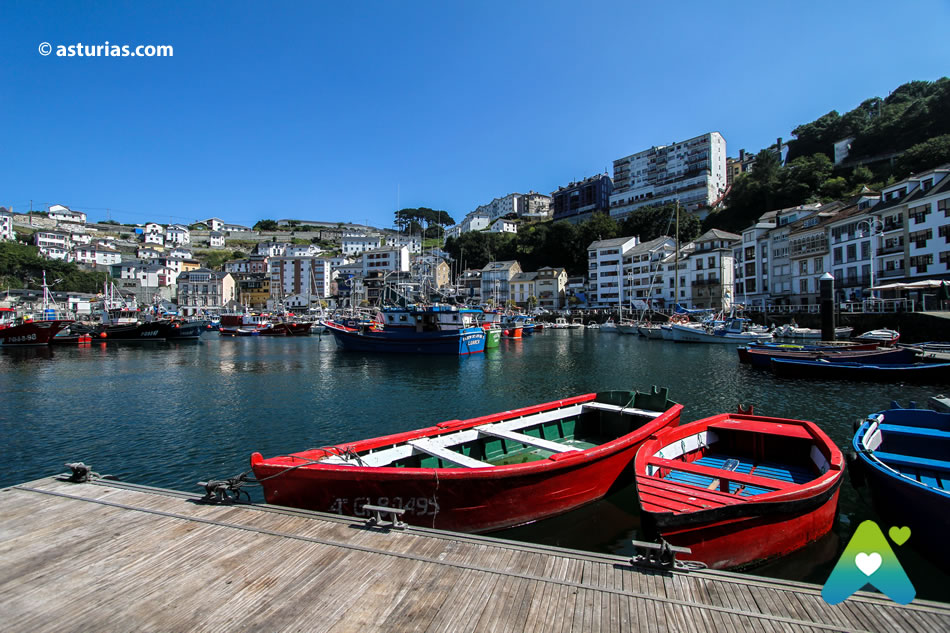 With its 6.000 inhabitants, it could be said that it is the most populated nucleus of the Asturian western coast, in addition to the capital of a municipality with many attractions; many of them unknown to the tourist.

Navia is one of the most populated and dynamic Asturian towns, one of those with the longest commercial, industrial life ...

Few towns are reflected in the water like Cudillero. A town that gives its name to an entire western council and that is always its image in duplicate. The great mirror of Cudillero portrays houses that are staggered upwards, forming consecutive urban terraces that are gaining height.

From the heights it is soon understood that Cudillero is a town born and developed around fishing activity. It came to have the largest fleet in Asturias and one of the most important in the Cantabrian Sea. A scene that is still frequently repeated is that of the boats arriving at a sheltered port, which, like the town, is collected and admirable.

Few towns are reflected in the water like Cudillero. A town that gives its name to an entire western council ...

Feeling at ease here is very easy, so Luanco's magic is an open secret. Since the XNUMXth century it has been establishing itself as a summer resort. Its charm as an Asturian town and its sea in its own right, however, is well worth a visit outside of the summer months.

Feeling comfortable here is very easy, so Luanco's magic is an open secret. From…

It is one of the most attractive towns in its area, known in the High Middle Ages as Vandugio. It can be reached perfectly by road, well signposted on the right at the exit of Proaza in the direction of Quirós and Teverga. Its houses with shields, its two medieval towers and its cemetery stand out..

Proaza, one of the councils, together with Santu Adrianu, Quirós and Teberga, through which the popular Senda del ...

Cobbled streets and low houses. There are also paths that do not lead anywhere in particular, perhaps to an unbeatable promontory to enjoy the view. Let's put ourselves where we always put ourselves we discovered Tazones as a different town, colorful, almost symmetrical, gently falling to the sea.

Tazones keeps the essence of the Asturian village, but in this case of a peculiar village, with granaries, but open ...

Lastres, in the council of Colunga, continues to host one of the most famous port pictures in Asturias. The fishing boats with the stepped bottom of a beautiful fishing village, make up one of the most representative images of the maritime essence of the region.

Streets mostly narrow and narrow, cobbled like those of before and always on a slope, are the thousand and one small arteries through which the social life of homes that seem to hang towards the abyss and which they have always had in the sea the exact reflection of his own inclination.

Famous today also for being location of a successful television series: «Doctor Mateo», the teacher's house, the plumbers' house, the radio ...

Lastres, in the council of Colunga, has joined the select club of the

The town of Ribadesella is the capital of a municipality surrounded by mountains, beaches and cliffs. Without going any further, in the urban area many of the attractions of the council (municipality of Tourist Excellence since 1997) are condensed. Apart from enjoying the local heritage and culture, it is easy to get close to the beach, the cliffs, different viewpoints and protected natural environments without going too far outside the limits of its urban nucleus.

Going around Ribadesella becomes a very dense and entertaining walk, with dozens of interesting locations.

The town of Ribadesella is the capital of a municipality surrounded by mountains, beaches and cliffs. Without going further,…

The town of Llanes, the capital of the council that bears its name, is the urban landmark of an extensive and rural territory that grows elongated in parallel to the Cantabrian Sea. A sea that gets into every corner of this town and that gives us its flavor in the middle of old and modern buildings, squares, squares, walks and abundant terraces where you can stop for a drink.

Within the urban nucleus of Llanes there is the Playa del Sablón, a charming, clean and protected cove, above which a long walk along the cliff runs. The unforgettable Paseo de San Pedro is close to one kilometer long.

The town of Llanes, capital of the council that bears his name, is the urban landmark of an extensive territory and ...

In the heart of the Picos de Europa, Bulnes deserves a visit for many reasons, be it by funicular or on foot. In the village there is an unusual atmosphere, a rustic reality in which barely a dozen neighbors are seen, and a good number of Asturian houses, many in ruins, including their parish. The town that now sees its tourist services reinforced has a popular bar, which is not populous, where you can eat a good stew and some other accommodation to spend the night.

Until recently, you only got to Bulnes by a winding path, carved between rocks of extraordinary beauty. ...

The granaries proliferate on every corner. These agrarian constructions are an ancient device that was used to store crops and slaughter meat and to keep food safe. we confirm with sight that in this village there is the largest concentration of granaries in all of Asturias. The territory is crossed by the Espinaréu and Sotu rivers.

The rural area of ​​Espinaréu (in the council of Piloña), is a living treasure from other times. Its age…