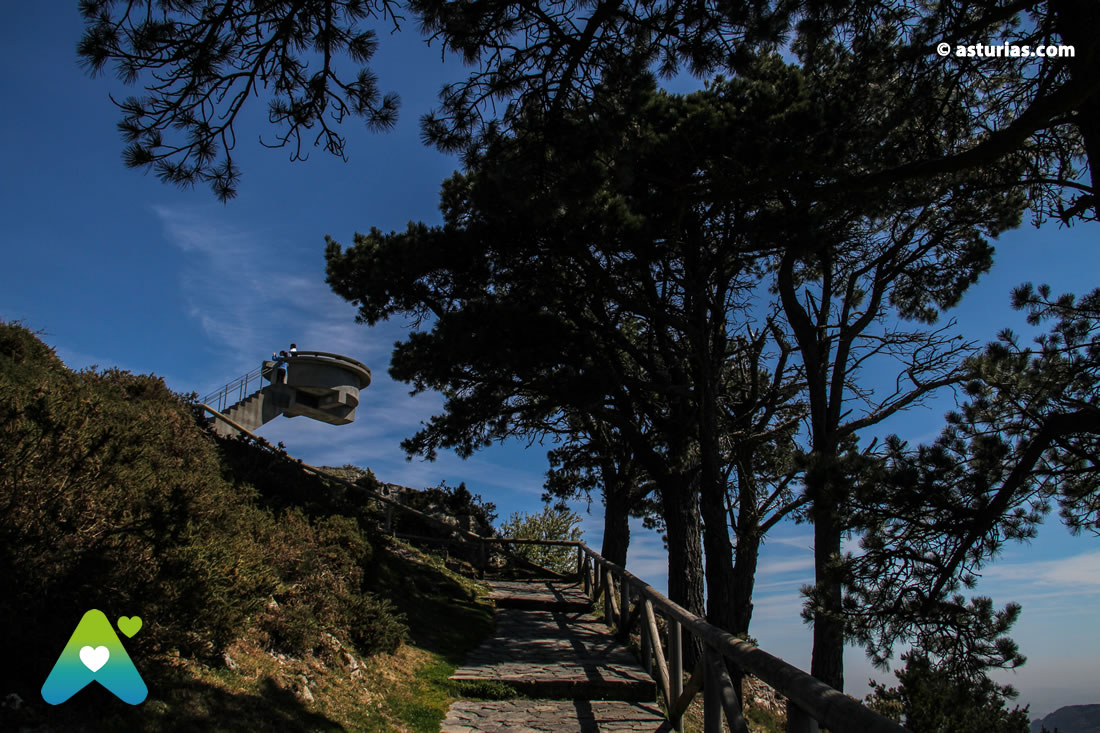 It is difficult to make a ranking or route through the best viewpoints in Asturias, we propose some of the ones with the best views. All the info on how to get there and what you are going to find ...

The Mirador del Fitu is the most famous of all. It is a concrete watchtower from the early XNUMXth century located in one of the most famous headlands in the Sierra del Sueve. From here we can make a sequence shot without cuts, at a glance the Cantabrian Sea, the mid-mountain and the Picos de Europa.
How to get there:
To be able to contemplate these spectacular views, take the AS-260 road, which connects the towns of Arriondas and Colunga. The port of Fito is equidistant from both towns, just halfway, 11 kilometers away. There is ample parking.

The Well of Prayer

In the Cabraliega town of Poo de Cabrales we find one of the best views of Naranjo de Bulnes or Picu Urriellu.
How to get there:
In the AS-114 about three kilometers from Arenas de Cabrales we find a large esplanade, ample parking and a picnic table. The views deserve a stop.

Viewpoint found on the meandering ascent to the Lakes of Covadonga, on the CO-4 highway, very close to the Lakes. As it cannot be otherwise, the views are extraordinary.

The Ordiales viewpoint is a natural terrace on the void, at 1.750 m. altitude and located west of the western massif of the Picos de Europa, so it is practically within the limits of the National Park.
How to get there:
We will make a three-hour walking route to get there, which takes us to travel the 8 kilometers away. We left the car in the parking of Pandecarmen, next to the Vega de Enol. We started the path of the Vega Canraso, which we reached after 45 minutes. The next milestone is the Collado Gamonal and the shelter of Vegarredonda, after an hour and a half of walking.
The trail continues just behind the shelter of Vegarredonda and now leads us to the channel of Cuene Cerrada where we begin to climb a winding path until we overcome it and we find ourselves on a small hill known as Forcau.

In the municipality of Amieva. Concrete platform located between the rural areas of Amieva and San Román, which offers beautiful views over the Cornión and Collada de Angón, as well as the Amieva valley. It is on the side of the Senda del Arcediano, the Roman road that linked the regions of Riaño and Cangas de Onís.

In the vicinity of the lighthouse of Tazones, one of the best preserved in Asturias, you can enjoy good views of the town, the cliffs and the entire coast of the area.

How to get there:
Before arriving at the town of Tazones, by the VV-5, you have to take the detour to the left and a later deviation to the right and reach the end of the road. It is indicated.

In the town of Lastres. From this vantage point you can see the entire town, its port and the town of stepped houses, famous for having been the set of the television series Doctor Mateo, several beaches and the entire Sierra del Sueve. On the esplanade is the Hermitage of San Roque and a small recreational area.

How to get there:
We take the AS-257 to the upper part of the village, there we will turn off to the right, following the indications to that effect.

In the town of Ribadesella. At the end of the Santa Marina beach promenade, there is a small square from which you can see the entire Riosellano sandy area, surrounded by mountains and we can also discover the dinosaur footprints - marked - in the stone.

How to get there:
In the western part of the beach we take the seafront and go to the end.

to 1,17 km At about 1.100 meters above sea level, the Mirador del Fito is written in capital letters; It is one of those rare places that allows a spectacular view ...

to 1,24 km The Sierra del Sueve, just 4 km from the coast of Colunga, rises above sea level above 1.100 meters, specifically its maximum elevation XNUMX ...

to 1,56 km We are talking about a beautiful and unique forest, located on the north face of the Sierra del Sueve, very close to the Cantabrian Sea. The humidity of the coastline reg ...

to 1,79 km It is a small coastal council bounded by the El Fito and Sueve mountain ranges to the south, and crossed by the Duesos river that seeks its mouth on the ...

to 2,56 km The Hotel de Caravia is strategically located between the sea and the mountains, it has comfortable double and single rooms, with views to the outside ...

to 2,56 km Our restaurant respects Asturian cuisine, proof of this is the membership of the most prestigious restaurant associations: Entrefogones y C ...