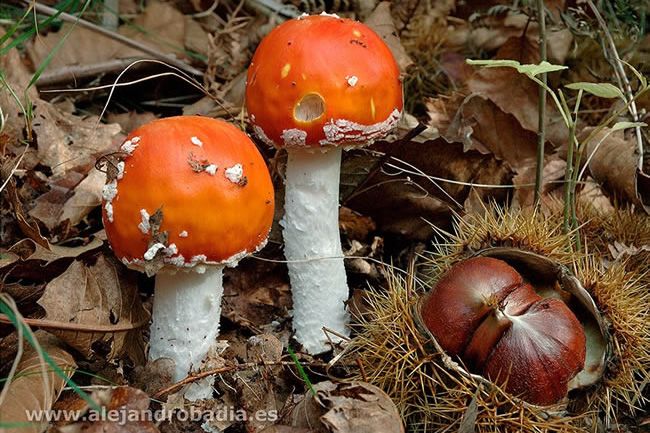 In Asturias "going to mushrooms" is quite an experience. You can take advantage of this recreational activity to enjoy the landscape, entering the forest or its lush valleys and forests. The variety of trees favors a great mycological diversity in the Principality, with more than 3.000 species of mushrooms and fungi cataloged in the last twenty years.

The fans of mycology are clear: Asturias is the mushroom paradise. At the foot of its oak and chestnut groves grow, among others, boils, catharellus and russulas; under the beech trees hydnum and more russulas; in the birch trees more tickets; around the pine forests: lactarius and more russulas and tickets. Chanterelles abound, chanterelles, trumpets of the dead are also common ... Of the three queen mushrooms of the Iberian Peninsula, two are regularly found on Asturian soil: the "Boletus edulis" and the "Amanita cesarean". The only one that does not exist is the truffle.

Unlike other communities, in Asturias you can collect edible mushrooms practically in all seasons of the year. The season can begin in the spring, in the month of April, with the appearance of morchelas. Soon spring mushrooms sprout or San Jorge, the most coveted and sought after in the entire North. They begin to emerge during the first days of March in the meadows near the coast and, as spring advances, they can also be collected in the central zone and in the meadows of the ports of Somiedo and Puerto Ventana. In summer find cantharellus, various tickets and russulas. En el autumn almost all species begin to bear fruit: tickets, lepistas, lactarios, tricholomas, etc. At winter, although few, springs some mushroom as the Flammulina Velutipes.

The extensive geography of the Principality, together with its varied habitats: mountains, forests, meadows, riversides ..., makes mushrooms appear everywhere, although they exist areas more conducive to the collection and with a greater mycological tradition, we mainly talk about the Central and Western Mountain, and in particular of municipalities such as Mieres or Cangas de Narcea. The natural parks of Redes and Somiedo or the forest of Muniellos are privileged enclaves. They also stand out in the Asturian west the high councils of the interior: Boal, Illano, Los Oscos ... In the central-eastern area the municipality of Piloña It is the most indicated, as well as all the peripheral councils of the Sierra del Sueve.

If our idea is to do mycological tourism, we must be clear that there are good areas at any point of the Asturian geography, although you always have to look for forests where there is no eucalyptus, such as areas of pine forests, high places or mixed forests. Other explanations are of a truism for true fans: go to the forest with wicker baskets or similar, never with plastics; take us a knife and a brush to clean the mushrooms in the field, since the spores stay in their environment and the mushrooms are clean at home; At all times we must be respectful of nature, picking only those we are going to eat. Last but not least: be prudent, have a prior knowledge and never eat mushrooms if we are not one hundred percent sure that it is edible.

Despite the great wealth that he treasures in this respect, the love in Asturias for the mushrooms is very late. This is due to reasons linked to religion and ancient mythology that have survived for centuries. Astures always felt dislike of mushrooms. This ancestral superstition was gradually correcting and from the 80 years of the twentieth century proliferate mycological societies and specialists throughout the region. further the mushroom is fully integrated into the gastronomy: alone, accompanying the main regional dishes or in new and suggestive recipes that try to enhance their primary flavors. The value of the mushrooms is clearly seen in the large number of contests They choose it as a protagonist based on photographic exhibitions, tasting special menus in restaurants, competitions, guided tours and field trips.

to 9,58 km Tejeme we are Ana and Manuel, two Asturian friends, who one fine day decided to set up an online wool store. How did the idea come about? Well, one day, Ana, art historian and hobbyist ...

to 13,62 km The NH Oviedo Principado Hotel is located in one of the streets of the old town, in front of the historic University of Oviedo, an excellent location since we are 400 meters from the c ...

to 13,70 km The Ayre Hotel Oviedo is located in a unique building in the city of Oviedo, it is part of the Congress Palace, designed by Santiago Calatrava, only 10 minutes on foot separate us from the ...

to 9,40 km Today, Asturian milk is one of the most valued and consumed in Spain. Historically, the Principality's dairy products have grown in prestige. The pastures of the region, the i ...

to 9,49 km This cheese is unique in its semantics, it bears the name in Asturian and does not admit an exact translation or a clear etymology. It would literally mean "to drown the chicken." Could be defined ...

to 9,58 km Traditionally, the axis of the Asturian economy has been mining and steel, with blast furnaces in La Felguera, Mieres, Avilés and Gijón. The past splendor of this activity, and the ...
See more things near here
Stainless steel work

Our restaurant respects Asturian cuisine, proof of this is membership in the most prestigious associations of ...

The Caravia Hotel is strategically located between the sea and the mountains, it has comfortable double rooms ...

The council is surrounded by a system of mountain ranges, saws and cordales of variable heights; starting at level 15 ...

The Sierra del Sueve, just 4 km from the Colunga coast, rises above sea level above 1.100 meters ...

Touring the Somiedo Natural Park must be, above all, an exercise in patience and ecological and cultural respect ....

In 2000 it was declared a Biosphere Reserve by UNESCO and today it is the most protected natural area in ...