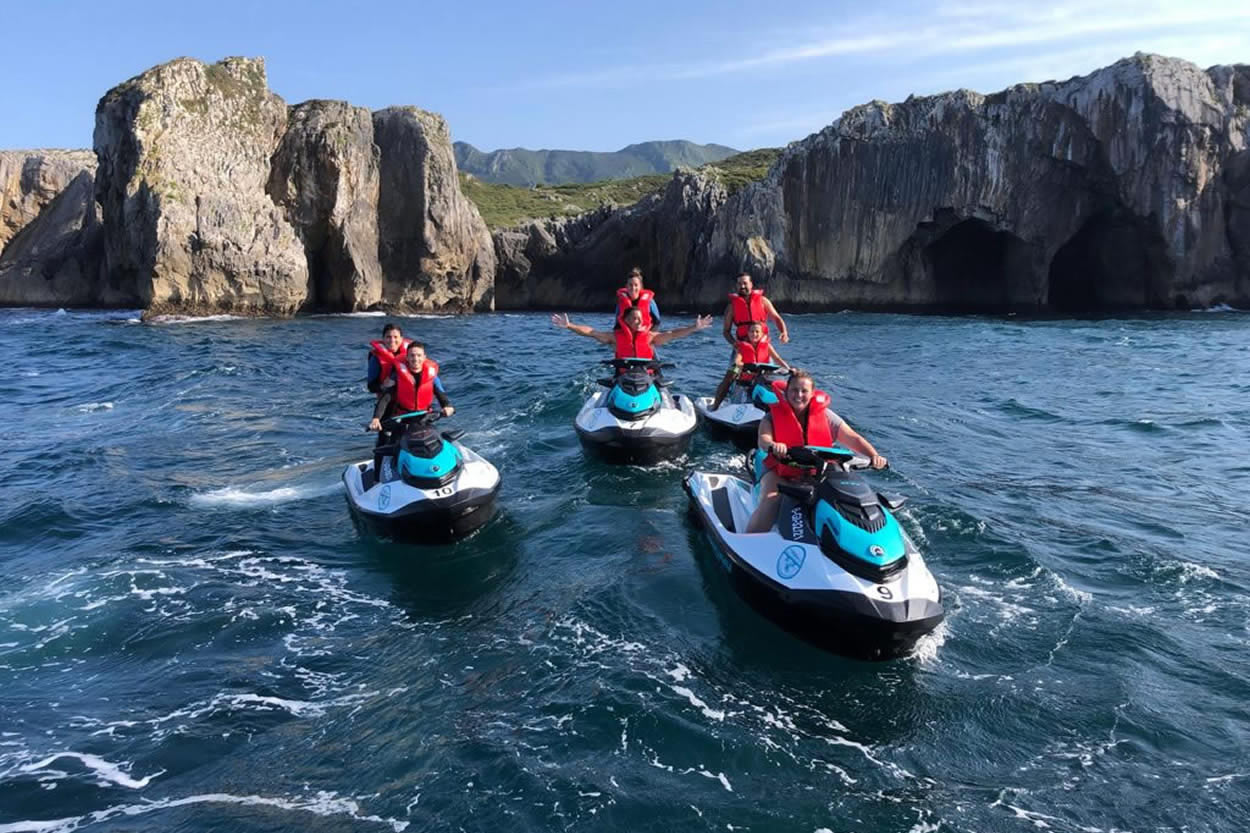 Adventure on the Costa Verde 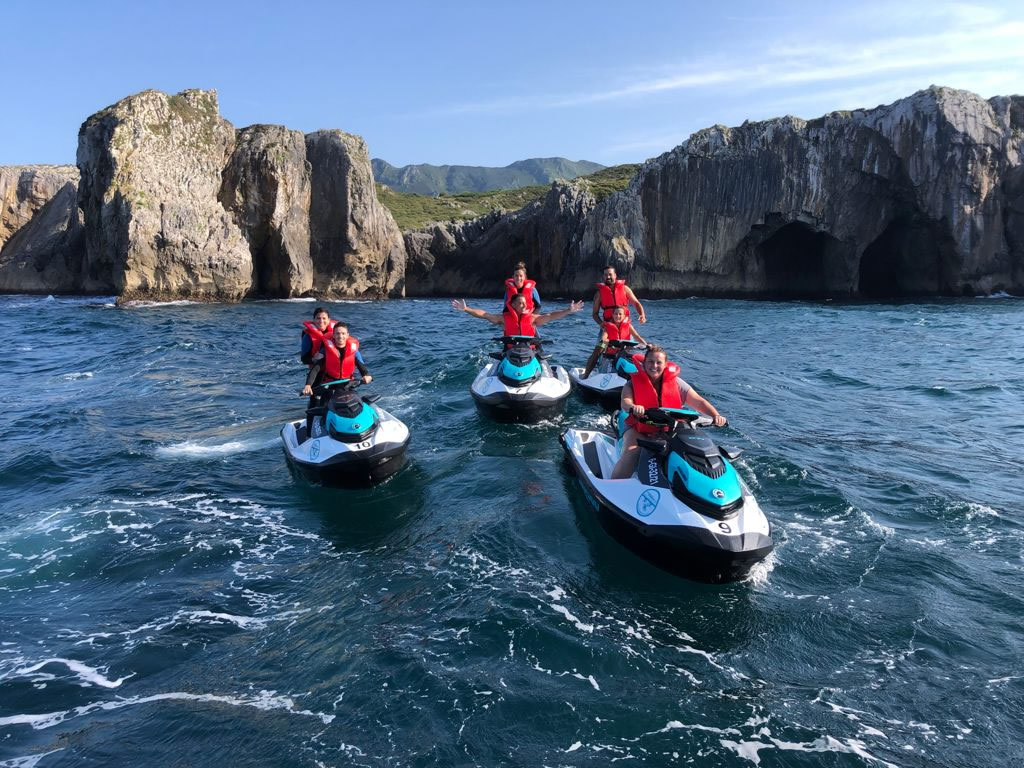 Adventure on the Costa Verde

Getting on a jet ski is one of the greatest attractions that Asturias offers in summer. A full-fledged expedition through untamed landscapes. An unforgettable experience and surely it is best shared among friends. A plan of no less than an hour. A sensation that should be experienced whenever possible.

The Asturian coast, better known by the nickname of "The Green Coast", add more than 472 kilometers in length, of which 272 are beaches. At every step we come across a surprise, thousands of extraordinary corners in the wildest and best preserved coast in Spain. From the beginning of June to the end of October, coinciding with the best state of the sea, renting a jet ski in Asturias is something that is increasingly in demand.

What route to do on a jet ski through Asturias?

There several options depending on the stretch of coastline: east, central or west coast. Also depending on the type of excursion: routes on beaches, estuaries or estuaries, and on cliffs. The localities where these guided routes have been consolidated the most are: Gijón (in the surroundings of its beaches), Villaviciosa (on the beach and estuary), Ribadesella (in its famous coast of the dinosaurs) and Llanes (routes along cliffs, coves and forts).

We talk about marine itineraries and wild places impossible to see in any other way. The versatility of motorcycles allows us to access incredible corners and gives us a very unusual perspective of this coastal landscape; something that will leave us completely fascinated. It is not only about feeling the speed, making turns in the water, dodging the waves and releasing adrenaline, but also knowing first-hand natural monuments, inaccessible cliffs, sea caves, inlets, hidden beaches, fishing villages, Jurassic sites, estuaries and natural mouths.

The landscape appears to us totally different from that of any coastal point of, for example, the Mediterranean. Here the mountains seem to rise directly from the sea. From our position on the water it overwhelms the orography of this land. In eastern Asturias, for example, The relief reaches over 2000 meters of altitude in the Picos de Europa and descends to sea level in less than 90 linear kilometers, forming a narrow coastal strip between the sea and the mountain range known in Asturias as "The marine". From our individual or two-seater motorcycle, there are places on our route parallel to this marina from which we can glimpse the highest mountains as a backdrop. Not in vain, since ancient times sailors have used the peaks of this area as beacons that indicate the proximity of certain ports or fishing grounds.

Rent a jet ski in Asturias

The Asturian coast is an extraordinary setting for aquatic adventures for the general public (not only for the intrepid). active tourism companies They will be in charge of discarding the days that are not suitable for the activity, due to bad sea conditions or poor visibility. When the activity is possible, these companies guarantee that we go well equipped and accompanied at all times by professional monitors. The starting point of the activity is usually well-equipped docks and aquatic clubs, in cities and fishing villages with a great nautical tradition. The facilities have changing rooms to put on the necessary neoprene suit. Subsequently, the jetty is accessed by a ramp near the boarding.

No experience necessary previous in the management of the jet skis, or any extra degree. They are scheduled outings in which a qualified instructor introduces us to the handling of the motorcycle, indicating the area that we will visit and the safety regulations to be taken into account.

Participants must follow the monitor at all times during the route. On each motorcycle, the rider and one companion may go, both equipped with life jacket safety, which is mandatory. Excursions on the coast must maintain the two miles safety distance regulations. In the entrances and exits to port, the speed has been limited by the port authorities.

The minimum age to drive jet skis is 16 years. This is established in Royal Decree 259/2002. Children over 12 years old can ride the motorcycle but they cannot pilot and must be accompanied by an adult.

All motorcycles have a built-in safety device called "man overboard". In the event of a fall, the motorcycle makes a circle and stops automatically. In addition, it has a wide platform that allows easy incorporation.

The bikes are state of the art., feature stabilizers and self-sliding footrests; In addition, the steering system reduces speed in certain manoeuvres.

Warning: This activity is not recommended for people with back problems, or pregnant women, nor is it suitable for those with heart conditions or other serious ailments.

How to handle a jet ski well?

1· Get ​​on the bike and take your time to familiarize yourself with it.
2· Accelerate smoothly and progressively to control the motorcycle safely.
3· Keep a safe distance from the rest of the motorcycles.
4 · When the sea is calm, the best position is to sit. However, in certain waves it is better to stand up to better control the direction.
5 · To brake, simply go by releasing the accelerator.

to 0,03 km We offer you a different way of getting to know the Asturian coast: sailing on jet skis. Ribadesella Aventura offers jet ski rental ...

to 0,05 km The Carroceu Sidrería is located next to the Ribadesella pier, overlooking the beach. On our terrace you can taste good cider and good dishes ...

to 0,05 km Montañas del Norte is an Active Tourism company dedicated to providing its clients with attractive experiences with a high degree of adventure against ...

to 0,06 km The El Puerto restaurant has been renovated, since 2016 enjoy this new place in the town of Ribadesella. We wait for you all! Speciality on ...

to 0,07 km The restaurant / seafood restaurant El Campanu is run by José Manuel Mori Cuesta 'El Marqués', a prestigious fisherman, who does not skimp when it comes to preparing ...

to 0,08 km Strolling around Ribadesella becomes a very dense and entertaining walk, with dozens of places of interest. All tourist information ...