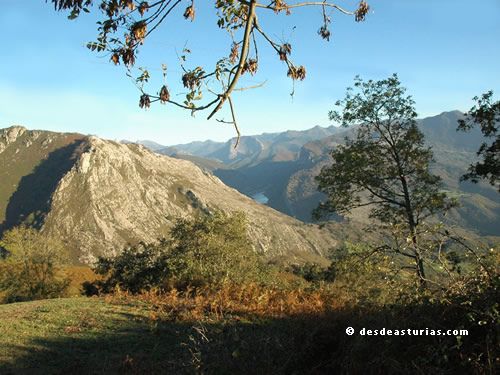 A top with a lot of view

A top with a lot of view

In the heart of the Biosphere Reserve, in the Redes Natural Park, this perfectly profiled peak is drawn against the sky. The Xamoca, with its 1.283 meters of altitude, it is a good option if you want to face a mid-mountain excursion. About five hours It is the estimated time that we will take to travel the 15 kilometers of route. Forests, colladas and majadas follow each other before facing the calcareous steps that elevate us at the top.

The route of the La Xamoca route starts in the town of Campiellos (530 meters), by a concrete track that goes up in a NO direction to the Colla del Arcu (628 meters). In Campiellos, behind the information panel that details the route, we take a path that passes in front of a hórreo, between the houses. We walk along the concrete track that rises to the left and passes in front of the town's water reservoir, located in the middle of a place covered by a dense forest where the chestnut tree reigns. The track continues in slope, in the shade of the trees, reaching the Collado del Arcu, which has at its side a cabin renovated. We continue under the gloom of the forest, and we approach the collada Ricau. The wooded area is left behind. The layout of the track makes a sharp curve to the right, and touches a stretch of hard slope until it reaches a place where the path marks another sharp curve to the left, and that constitutes a fantastic balcony-veranda towards the whole valley of Comillera stream. From here we can admire in all its splendor the peak Peña Blanca and all the mountain range that from its summit extends to the right to end at the Saus pass and the rocky wall that culminates in the Peña La Xamoca.

After a last leg of the climb we access the flock of Llagos, finding us with his first shepherd constructions. Llagos is a flock of restored huts and meadows located at the foot of La Xamoca. An idyllic natural setting. On the left bank there is a wide and steep prairie, on the upper part there is a fountain-trough where we can fill the canteen. A water with which we can delight our thirst, because not in vain the water of this whole area has been declared «natural mineral water», the first declaration of this type in a protected area of Asturias, and the sixth that achieves it throughout the Principality.

In the vicinity of this sheepfold there is a viewpoint of authentic luxury: a green and flat meadow, well maintained, and bounded with a rustic wooden fence, where two good tables make up an improvised picnic; The southern edge of this campaign is marked by a beautiful and ancient Texu that provides a pleasant shade. From here we can recreate ourselves with the breathtaking views at our feet: the village and the Rioseco reservoir.

A few meters above, in the same prairie, there is a wooden shaft that supports two indicator panels: to the left it points to La Xamoca, and to the right to the Unqueru pass. Following the indication to the Xamoca we return to introduce a small forest, with marked path and abundant marks senderistas. We left the forest, continuing the route to the middle slope of the mountain range (on the west side) by a mixed ground of low scrub vegetation and limestone.

The slope of the northern slope of the peak is covered by a lush beech forest. We crowned the Xamoca, and we enjoyed a deserved and pleasant stop at the top. Without realizing it, he flies time and enjoys a splendid view; As far as we can see, with a clear day, we discover the councils of Sobrescobio and Laviana and part of those of Piloña and Caso with all its mountainous landscape.

We start the march again, taking the final stretch of the crest to the bifurcation of the signage, and this time we take the path of the Unqueru Collado. A small narrowness between two stones is the anteroom of the forest of Monte de Falafría. The path runs on a hillside, crossing the forest, until reaching the pass of Faidiellu. The Pic de la Carba is lined to win the Collado de Unqueru, recognizable by the small promontory between the meadows. From this point, you must go towards the ruined hut that can be seen a few meters below and take the path that, on the left, crosses diagonally a pond area in the direction of the cabins of Espines, from where the descent begins.

The road crosses the steep slope between Espines and Práu Ríu and continues down the valley along the river, until it is crossed by a concrete bridge with a wooden railing. Always on the most marked descending path, leaving the deviations that lead to Campiellos, a forest of chestnut trees and, taking in all the bifurcations the path that continues straight ahead, the hut of Güergu is reached, from which two roads depart. The one on the right connects with the road of Rioseco, final destination of our excursion.

to 16,03 km GEOFACE is an Asturian company of excursions and guided visits that operates throughout the region. We are specialists in ecotourism, cultural tourism and hiking. All of our guides are G ...

to 20,26 km Tejeme we are Ana and Manuel, two Asturian friends, who one fine day decided to set up an online wool store. How did the idea come about? Well, one day, Ana, art historian and hobbyist ...

to 20,95 km The Santolaya company, which has been operating since 2003, focused on the production of artisan dairy products, mainly rice pudding and yogurt, made from ...

to 10,45 km Its distinctive flavor is a conjunction of at least three factors: exclusive casina cow's milk, an autochthonous breed dedicated primarily to the production of meat, with a performance m ...

to 10,50 km Biosphere Reserves are internationally recognized, although they remain under the sovereignty of their respective countries and are not covered or protected by any international treaty ...

to 11,09 km The granaries were part of the Asturian landscape due to the inevitable human adaptation to a hostile and humid environment. If you visit Asturias you will see that the granaries exist. They abound, more ...
See more things near here
Stainless steel work

Tiatordos Peak, also known to hikers as the "perfect mountain", is the most emblematic elevation ...

Talking about mining is, therefore, talking about Asturias. For more than two centuries the Principality has contributed between 50 and ...

Traditionally, the axis of the Asturian economy has been mining and iron and steel, with blast furnaces in La Felguera, ...