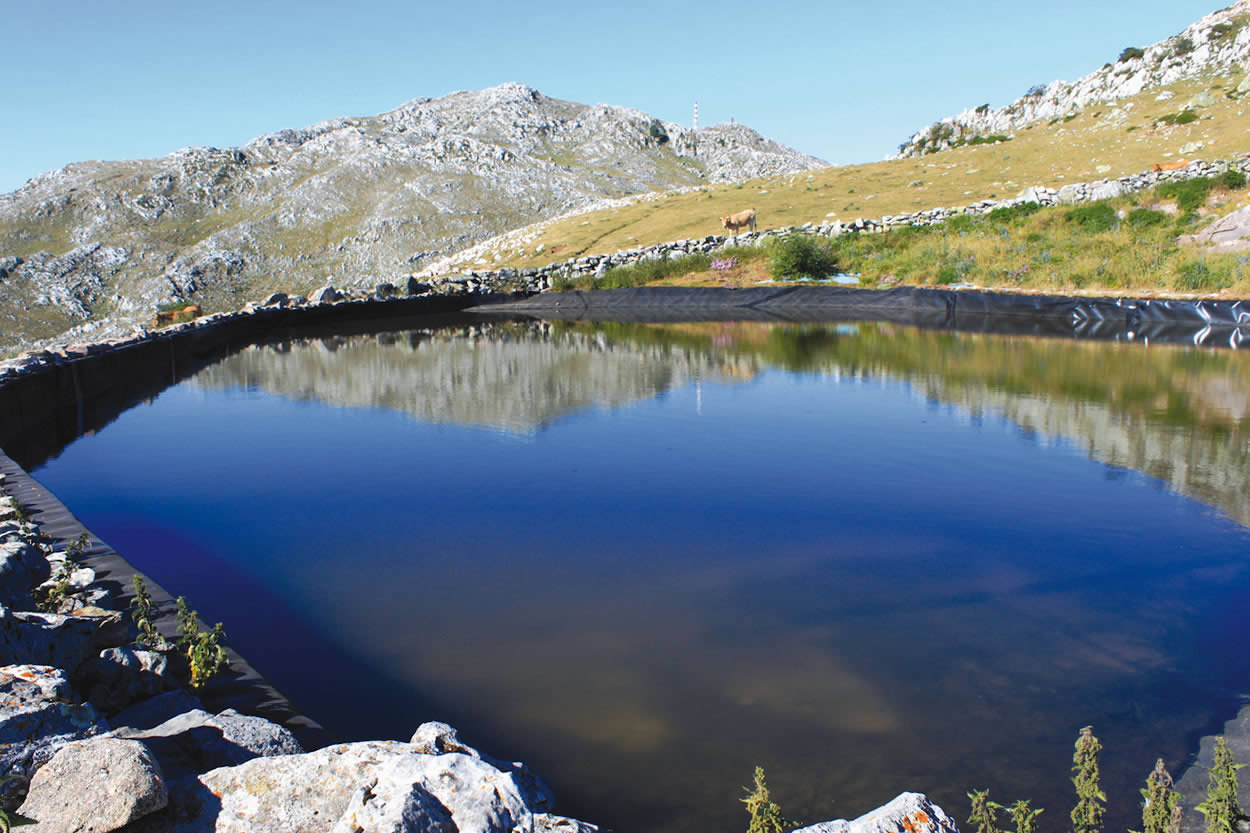 Route through a "Protected Landscape"

Route through a "Protected Landscape"

The sharp relief of the Aramo contrasts with the smooth contour of the wisdom teeth that surround it. On the western slope, the heights of the peaks descend to the valley by stepped planes, the seat of the morteras. The eastern slope, known generically as La Cuesta de Riosa, constitutes a steep barrier that spans a steep drop of more than 1.300 m. On it are located its highest peaks, such as the Xistras (1.765 m.) And the Gamoniteiru (1.791 m.). Both delimit the territories of Riosa and Quirós.

The top of Xistras peak, the highest point in the council of Riosa, it is reached with relative ease taking advantage of the access road to the Gamoniteiru, where the television antennas are located.

To start the route we have to take the track that starts from the A-230 road between Pola de Lena and Bárzana de Quirós (km. 10), in the place known as Dig the Crest. Through there we reach the collá del Fresno (1.225 m.), Where we must park. Then we face the comeback that sinuously goes to the Gamoniteiru.

For her we continue walking towards the top, crossing the colláu del Medio and Les Retuertes, a strategic place in the Aramo where the traces of a prehistoric site are located. The intricate track carved out of the rock in the eastern foothills of La Bobia continues up above the Casa del Inglés and Valdefresno. We immediately arrive at Los Llanos de Martín, a small esplanade between the El Gatu valley and the Pozalón peak, on one side, and the Vega Llonga peak, on the other. Right there, staring at the television antennas, we keep moving down the track, which is now paved, while we contemplate to our left, under a lower level, the Cubiellos valley and its trough for cattle. Later we reached the Tresnona pass (1.710 m.) (5,7 km., In 1 h. 15 min.), Jacket located under the southern cliffs of the Gamoniteiru. Here we take a path that rises to the right and continues north until we pass the pass. Afterwards, continue marking with paint in that same direction skirting the antennas along its northern slope until it emerges in the Armitones mayá, wide notch located between the Gamoniteiru and Xistras peaks.

From this panoramic place, the route advances along the ridge of the mountains following the marks to crown the ridges of the strategic Xistras peak (1.765 min.) (6,5 km., In 2 h. And 48 min.). A universe of horizons merges in this watchtower. Then we continue with the planned itinerary descending the opposite slope of the peak towards Lake Llazarandín, seen on the near horizon. The descent is made comfortable by a wide cattle ranch. The waters of the lagoon, which is protected by a fence, supply the trough for cattle. On its western side, the panoramic view is closed by the summit profile of Santiago Peak, easily accessible (1.692 m.) (8,4 km., In 3 hours and 45 min.). 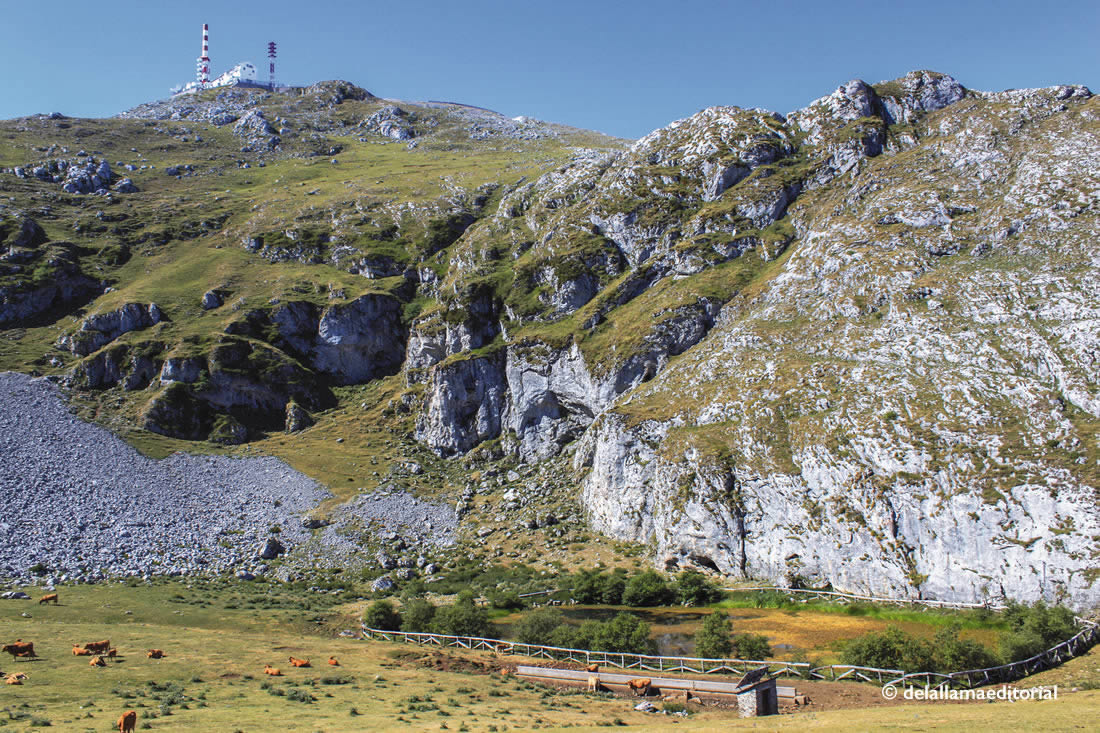 We now descend to Fondos de Vega, a beautiful sheepfold with a small lagoon and a robust stone hut. We go around it and change our course to the south to enter the karst labyrinth that the locals call toyos. Here the path winds through the place known as La Privá, under the western slope of Santiago Peak. Then we go up the cimero spine, where it is located the cave lake (1.555 m.) (10,7 km., In 4 h. And 55 min.), Where there is also a fountain. We are located in one of the most emblematic places of the Aramo. Its landscape, with a clear glacial structure, is sheltered by the north face of the Gamoniteiru and Xistras peaks.

Then we go back a few meters to follow a cattle track that, after successive revolts, overcomes the southern spur of the Aramo until it connects with the access road to the Gamoniteiru television repeater (1.734 m.) (12,3 km., In 6 h.). We begin the return to the collá del Fresno through the Valdefresno valley, deep ravine where they shelter new sheepfolds that in a staggered way they descend to Los Veneros through Llanos Fresnosa, Campa Texu, Fuxerrondo, Llanos de Martín and Casa del Inglés. The descent begins by climbing the Tresnona pass and immediately we descend to Campa Texu. We take here the marked path that advances through the bed of the valley until we reach the great pasture of Los Veneros and its lagoon. We follow the path through the top of the valley, and further on, among ash trees, we win the road and the Les Retuertes viewpoint. Once there we descend to the starting point of the excursion. At the collá del Fresno (1.225 m.) (17 km., In 7 h.) This beautiful mountain excursion ends.

Book «Routes through the mountains and the roads of Asturias»

If you want to know first-hand routes and places like this, we recommend you buy the book «Routes through the mountains and the roads of Asturias», written by Ángel Fdez. Ortega, one of the greatest connoisseurs of the mountains of Asturias ..

© · Texts and photos taken from the book "Routes through the mountains and the roads of Asturias" by Ángel Fdez. Ortega, edited by Delallama Editorial.

to 3,22 km Casa Prieto IV is a haven of tranquility in an environment of overflowing nature that perfectly represents the universal brand Paraíso Natural de ...

to 4,36 km The Mirador de Santrocaya is an old barn and stone stable from the XNUMXth century that has been completely rehabilitated, combining the tradition of the architecture of...

to 7,14 km Located in the town of Ricabo in the upper area of ​​the Quirós council, 6 km. from the capital Bárzana, surrounded by nature and well connected (bordering the ...

to 7,14 km Located in the town of Ricabo in the upper area of ​​the Quirós council, 6 km. from the capital Bárzana, surrounded by nature and well connected (bordering the ...

to 7,45 km The house is located in Cortes, where the birth house and the sanctuary of San Melchor de Quirós, the first Asturian saint, are preserved, 11 km. of Bár ...