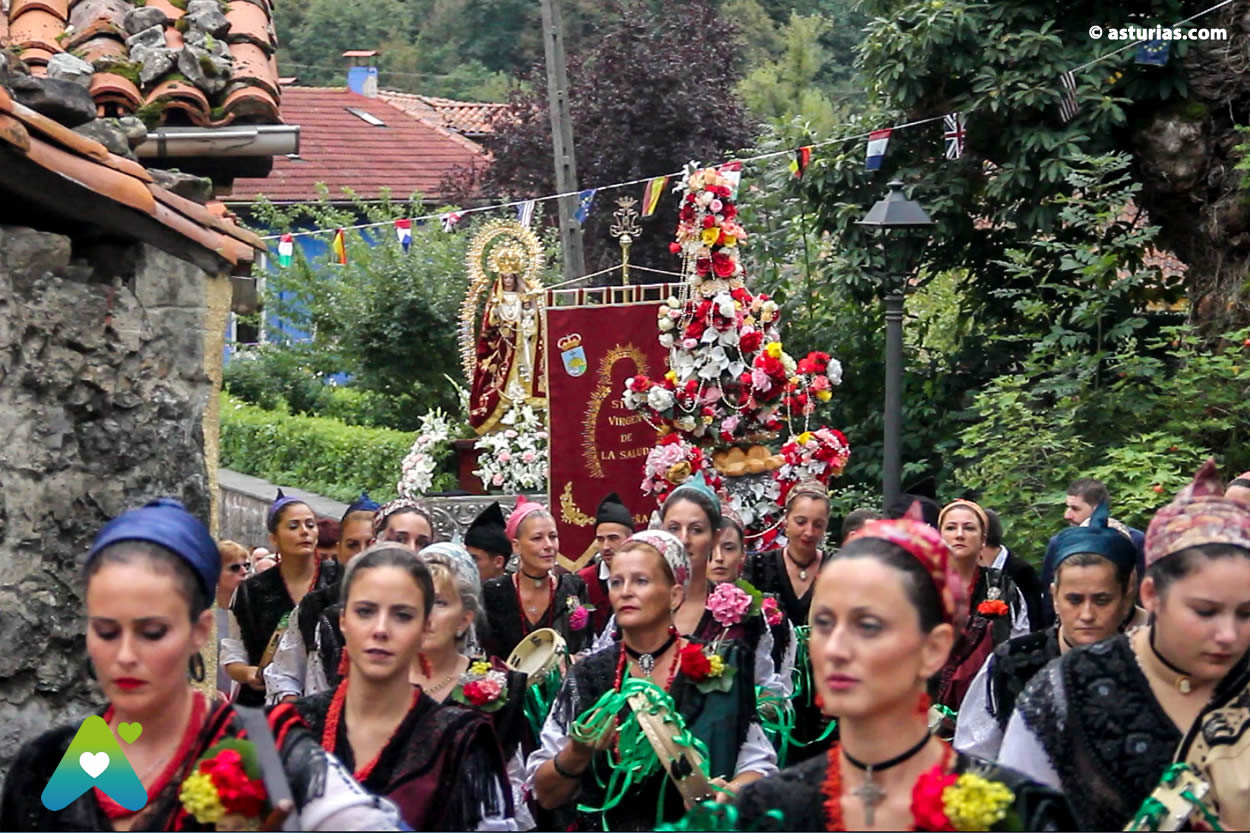 The Virgin of Health in Cabrales

Few patron saint festivities offer the colorful and wide-ranging folkloric range of Carreña de Cabrales Health. A celebration where the Virgin is surrounded by the sincere enthusiasm of hundreds of girls and boys, boys and girls, bagpipers and bagpipers.

The acts in honor of Our Lady of Health, patron of the council of Cabrales, they are always celebrated on the Sunday after September 8, which is the Day of Asturias, the festive day of the autonomous community.

The history of this devotion is linked to that of a cabraliego emigrant, Francisco Bueno de la Bárcenawho got sick in Sanlúcar de Barrameda (Cádiz) around 1830 and, that when getting rid of the blindness, it commanded to bring from Sevilla an ivory virgin to which a chapel was built in Carreña.

Since then, the Virgin only leaves her sanctuary once a year, for the multitudinous procession where all the inhabitants of Carreña, as well as the neighbors of the towns of the municipality (Arenas, Arangas, Tielve, Asiegu, Berodia, Puertas ...) they overturn to celebrate it; each one with his songs and particular offerings of bouquets. The Carreña party it becomes the feast of a whole municipality.

"Today we come down to sing to you, on the day of your feast all together worship you."

The women wear the traditional costumes of a villager and the men those of Porruano.  The bouquets, all different and with surprising floral motives, worked to the detail and adorned with all the affection, they arrive at the chapel after noon. Young people carry them on their shoulders. The children carry branches more appropriate to their height.

The girls, who also adorn their tambourines with bows of different shades according to the locality, sing popular stanzas like this:

Castanets, tambourines, drums and bagpipes set the pace all day, both at the solemn mass in the town square and in the multitudinous procession through the streets and neighborhoods of the capital city of Cabrales.

The festive events already begin on the eve, Saturday night, with the traditional and colorful exit and burning of Panorama in the light of fireworks. A figure of wood and paper, of centuries-old tradition, which changes its motive every year. More than 100 years of history promoted by the cabraliegos artisans, who initially intended to enlighten the villagers when they offered the ramu to the Virgin.

The big day, after the religious acts, there is a spectacular concentration of pipers and bagpipers organized by the local band: Picos de Europa DOP Cabrales. Its about Picos de Europa Festival, which features the participation of bagpipe bands from all over the principality, culminating in the "great parade", where more than a hundred bagpipers, all together, delight the public that crowds the main street.

to 0,03 km The Cabrales Cheese production area includes the Cabrales Council and three neighboring towns of the Peñamellera Alta Council. It is made from ...

to 0,13 km The Casa Ramón Guesthouse has 10 double rooms. We also have other accommodations near our pension. We offer you several po ...

to 1,18 km Located in Poo de Cabrales 1 km. from Arenas de Cabrales and very close to the main entrances of the Picos de Europa, with spectacular views of the ...

to 1,21 km Located in the rural center of Poo de Cabrales, at the foot of the Picos de Europa, they enjoy a privileged view of the Naranjo de Bulnes (Picu Urri ...

Asiego, an exemplary town of Cabrales