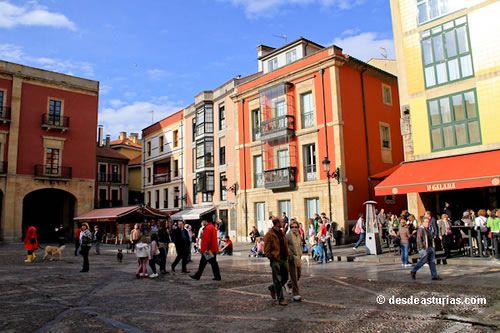 The citizen charisma of Gijón is lived doubly in one of its neighborhoods with more essence. Cimadevilla has always had, and still retains, a popular air, witness and protagonist of the most important historical events in the city. The winds originating in Gijón can still be seen on the facades and streets, as well as in a exceptional environment, always singular, that comes from yesteryear and that is full of stories of fishing, family treatment and mundanism in its thousand cider houses.

The Gijon neighborhood of Cimadevilla is a unique environment that is not easy to find in other historical peninsular areas, no matter how far the sea has been forged. Cimadevilla has not put obstacles to its development, it boasts tradition but it is also pure avant-garde. A work of Chillida: the Praise of the Horizon, the symbol of the city is already on its own merits. You can see where you look, the huge sculpture has a lot of horizon, it is different in each perspective and proposes to each look the cosmopolitanism of Gijón.

The Cantabrian and the urban hustle they have left indelible marks alike. But above all there are the traces of its inhabitants: fishermen, cigar makers, artisans ... shallow men and women, which is how those born in this neighborhood are known. Its streets are apparently quiet during the day, but at night the transformation takes place and it becomes a meeting place and meeting, restaurants and cider houses on every corner, and a large number of cocktail bars to arrive at dawn. You can start with some crabs or bocartes, cheer yourself up with cider, and if you choose, finish very late or very early, depending on how you look at it, with a good breakfast near the marina.

After knowing years of certain abandonment in their buildings, nowadays it is a pleasure to walk through its secluded streets and squares. The buildings have renovated their facades, they have washed their faces. More than two hundred buildings are specially protected and at least a dozen are part of the cultural and historical heritage of Gijón.

We can make a planned tour of about two hours to soak up their typical seamanship and flavor. We will start in the beautiful Plaza Mayor presided over by the City Council, the setting for festive events and popular celebrations such as the Semana Grande or the Antroxu (Carnival). We crossed the arc of the western area and we headed to the marina, we came across the Monument to Don Pelayo (homage to the first king of the Asturian Monarchy that appears on the city's coat of arms), is in the center of the Plaza del Marqués. Here is located the Palace of Revillagigedo, from the 18th century, which surprises with its baroque beauty and which today is an International Center of Contemporary Art. It usually houses temporary exhibitions of great national and international merit and the works of talented artists always pass through its hall. It has attached to it the Collegiate Church of San Juan Bautista that serves as a stage for classical music concerts throughout the year. In Cimadevilla, cultural life takes place at the same level as its bustling environment.

We advance along the promenade Leisure port, sports port, with enviable and maintained facilities and a very beautiful environment that have turned it into a scale of numerous regattas. At the end of the walk, the jetty closes the harbor, when the sea beats with force is a spectacle that should not be missed because the waves exceed the retaining wall. We go up the well-known Hill of Cholo (This term was brought by emigrants who came from America) and thus we approach the alleys that the people of Gijón fill when the good weather arrives.

A few meters further on we can admire the Chapel of Solitude of the 17th century, spiritual headquarters of the Mareantes Guild, whose festival takes place in September. Dates in which the entire neighborhood bustles at parties and celebrations.

The avant-garde is located at the end of Artillería Street Northeast sculpture, made in cortén iron by Joaquín Vaquero Turcios. It symbolizes the most anticipated wind in Gijon summers, it is the one that pushes and sweeps the clouds and ensures a sunny day. Going up towards the Santa Catalina Hill, we went through what was once a military artillery complex and has now been recovered for the enjoyment of Gijons and visitors who are encouraged by a unique walk.

to 0,34 km This hostel is a perfect accommodation to get to know the old town of Gijón. Located 170 meters from the San Lorenzo beach and the port of Gijón.It has 6 rooms with ...

to 0,36 km Our hotel is located in the marina of Gijón, and a step away from the heart of the city. With excellent views of the port, and next to the fishing district of Cimadevilla, with the beaches ...

to 0,42 km A privileged situation characterizes the Hotel Don Manuel, located next to the main commercial arteries, in front of the Puerto Deportivo and the gates of the historic center of the city ...

to 0,11 km This museum was inaugurated in 1971 in one of the most emblematic buildings of the city: the late XNUMXth century palace-house where the illustrated Gaspar Melchor de Jo was born and lived ...

to 0,14 km The baroque style building is surprising for its noble sobriety but also for the warm earthy tone of its walls. Between the two crenellated towers extends the central body of ...

Festival of Natural Cider of Gijón

to 0,15 km The participating winemakers give away more than 30.000 liters of cider and 10.000 glasses of cider are put on sale with the Festival's commemorative logo. Endless queues led to ...
See more things near here

Places of interest in Gijón

It is the capital of the Costa Verde and urban development coexists with a privileged natural environment. Gijón has ...

Be that as it may, two hours go a long way, being able to admire more than 4.000 aquatic, vertebrate and invertebrate individuals ...

Ecological and Craft Market of Gijón

The market is held in the Plaza Mayor of the city, every second weekend of every month, Saturdays and Sundays ...

This museum was inaugurated in 1971 in one of the most emblematic buildings of the city: the palace-house from the end of ...

The Barjola Museum is a center open to culture, a space where contemporary art meets exhibitions ...

Boisterous when time permits; and that even in the harsh winter months, the Wall remains a benchmark ...